African In Top Spot At UN Gathering of World Leaders 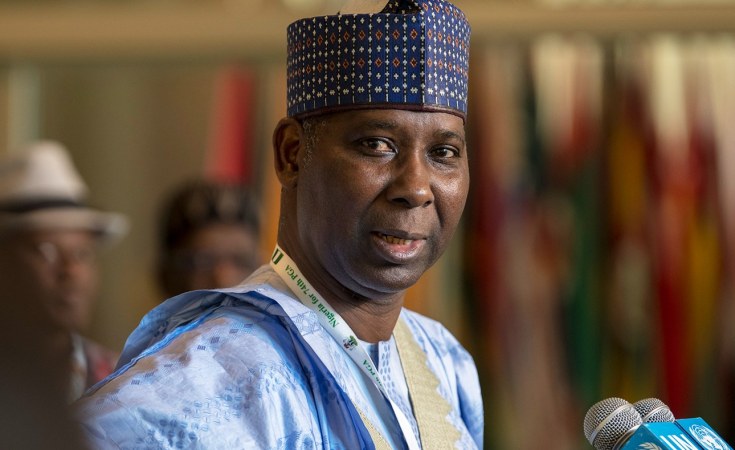 A veteran African diplomat is taking center stage this week at the United Nations as the 74th session of the General Assembly (UNGA) gets underway.

Tijjani Muhammad-Bande, a former university head and Nigeria's UN ambassador, began a one-year tenure as UNGA president on Monday. He was elected in June to the  position that rotates among the regional groupings of the 193 UN member states.

The first and only previous Nigerian to hold the post is Joseph Nanven Garba, a general and diplomat who became UNGA president thirty years ago. Since then, there have been five others from Africa - Amara Essy (Cote d'Ivoire), Theo-Ben Gurirab (Namibia), Jean Ping (Gabon), Ali Treki (Libya) and Sam Kutesa (Uganda).

The new General Assembly session opens today (September 17), but the real action will take place next week, when heads-of-state take turns delivering speeches - most of which usually attract little notice. By tradition, the first leader to speak during the General Debate is Brazil, followed by the United States. For the past two years, President Trump arrived late and another leader (Guinea in 2017 and Ecuador in 2018) took his spot.

The attention-grabbing, issue-focused sessions this year include the Climate Action Summit and a  high-level meeting on Universal Health Coverage - both on September 23. On September 24, the UNGA President will convene the two-day Sustainable Development Goals summit to promote progress towards eradicating poverty and disease across the globe. This is followed on September 26 by the High-level Dialogue on Financing for Development.

Before being chosen by President Muhammadu Buhari as UN ambassador, Muhammad-Bande directed Nigeria's National Institute for Policy and Strategic Studies (NIPSS) (2010 to 2016) and the African Training and Research Centre in Administration for Development (CAFRAD) in Morocco (200 0-2004) and was vice-chancellor of Usmanu Danfodiyo University in Sokoto, Nigeria (2004-2009). He is a graduate of  Ahmadu Bello University in Nigeria and earned and MA from Boston University and a Ph.D from the University of Toronto.

In an interview with UN News, the UNGA President listed his three priority issues for the session as poverty eradication, quality education, and inclusion.

What Africa's Presidents Have Been Up to At #UNGA19
Tagged:
Copyright © 2019 allAfrica.com. All rights reserved. Distributed by AllAfrica Global Media (allAfrica.com). To contact the copyright holder directly for corrections — or for permission to republish or make other authorized use of this material, click here.