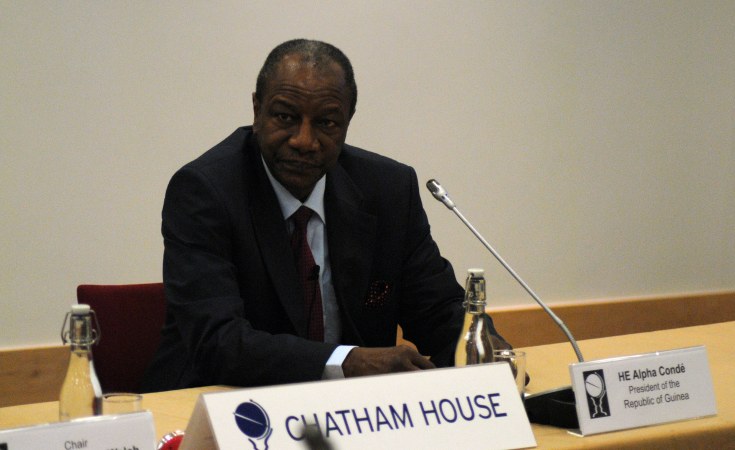 Cape Town — At least one policeman and a protester were killed on Monday during demonstrations in Guinea against a possible change to the constitution that could let President Alpha Conde seek a third term, Reuters reports.

The news agency is quoting witnesses as saying that police opened fire on demonstrators as they ransacked military posts and blocked roads with burning tyres in the capital Conakry. Protests in the northern opposition stronghold of Mamou also turned violent.

Conde's second and final five-year term expires in 2020 but he has refused to rule out running again. Conde, who is 81, has asked his government to look into drafting a new constitution, sparking calls from opposition leaders for a series of demonstrations, starting this week.

A doctor at a hospital in Conakry said one protester was shot dead in Conakry, Reuters says, adding that residents in Mamou said a paramilitary policeman was beaten to death by protesters.

Amnesty International's West Africa Researcher François Patuel said: "The widespread use of tear gas and live ammunition during clashes between protesters and the security forces in Conakry today has left at least four killed and several wounded according to human rights groups observing the protests. The security forces must refrain from using excessive and deadly force. The authorities reported at least two deaths including a gendarme in the central town of Mamou.

"The use of lethal force against protestors and bystanders and the arrest of the protest organisers are a shameful attempt by Guinean authorities to stifle dissent by any means necessary. These acts should be investigated independently, and suspected perpetrators brought to justice in fair trials.

"In an already tense political climate, today's killings and the arbitrary arrests of at least 14 people over the weekend are only adding fuel to the fire in a country where more than 100 people have died during protests over the past 10 years.

"Given this disastrous track record, the authorities must take immediate steps to break the cycle of violence before it spirals out of control. They should start by ensuring people arbitrarily arrested for organising the protests are released immediately and unconditionally and take all the necessary means to facilitate peaceful protests and ensure people can express peacefully without fearing reprisals."