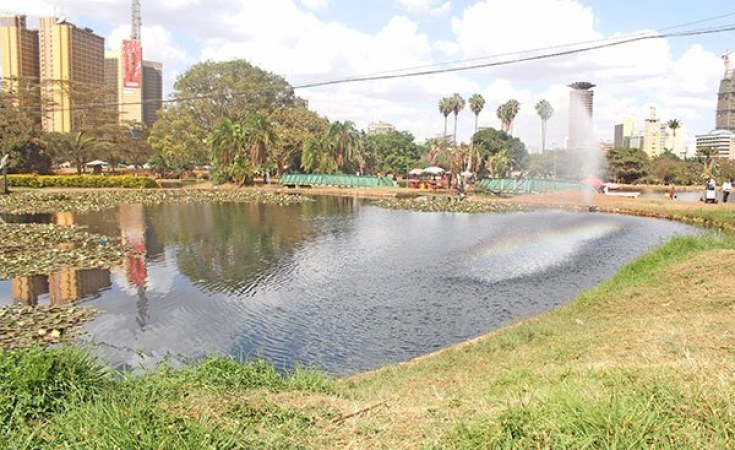 Lucy Wanjiru/Daily Nation
Uhuru Park is one of the few green recreational spaces in the city where one can relax and enjoy themselves free of charge.
allAfrica.com
By Sethi Ncube

Johannesburg — Kenyans from all walks of life have come out in their numbers on Twitter under the hashtag #UhuruPark, to express their disgust at the government's insatiable hunger for infrastructure that it can't afford as it introduces its newest project - an expressway.

Uhuru park is a place of tranquillity for many Nairobi dwellers, and a mere stone's throw away from the hustle and bustle of the city. It is one of the few green recreational spaces in the city where one can relax and enjoy themselves free of charge, writes Anita Murage for Daily Nation.

Located on the fringes of the capital's CBD, the 13-hectare recreational park still maintains that historic lustre associated with it for over 30 years. It is used by Kenyans as a venue for gatherings such as political rallies, public holiday meetings, and presidential swearing-ins. Besides the acres of well-kept grass to relax on, the venue also has a water stream where lovers can take a board ride for of Sh100, reports Nairobi News.

The Sh60 billion expressway will devour part of Uhuru Park, and run through the University of Nairobi where it will either dwarf or bring down the Papal Dais used by Pope Francis in November 2015 during his visit to Kenya. Other properties to be affected include Hotel Boulevard, Next Gen Mall, Khalsa Primary School and parts of the Railways Club, the iconic St Paul's University of Nairobi Catholic Chapel, Military Camp and National Persons With Disabilities plots in Westlands, writes Amos Kareithi and Jacob Ngetich for Standard Digital.

By the time construction company, China Roads and Bridge Company (CRBC), finally hands over this expressway to Kenya in 2049, it will have minted a total of Sh102 billion in a deal where they are insulated from competition, taxes and losses, Standard Digital reports.

It has been reported that once completed, CRBC is expected to operate the highway from 2023 to 2049 where it is projected it will be used by 55,236 vehicles a day. The revenue generation is expected to grow from Sh20.4 billion in 2023 paid by 22,176 vehicles.

A survey conducted by Kenya National Highway Authority (KENHA) before implementation of the project found that 39% of Kenyans were opposed to paying any levy for use of the road while 49% of those surveyed felt the cost should not exceed Sh50 per trip. The study concluded that on average it will cost a motorist an average Sh155 to use the expressway, according to Standard Digital.

This is what some concerned citizens had to say on Twitter:

Rest in peace Prof Wangari Maathai,you were a true environmentalist we really missed you,now that you are no more the son of Jomo and the son of Oginga never appreciated your tireless efforts to keep Uhuru Park,they out to out to destroy #UhuruPark

The Green Belt Movement has and remains acutely alert to the full preservation and conservation of public spaces. We are thus making a clarion call to all patriotic and green-conscious Kenyans to rally behind us as we petition the relevant authorities on #UhuruPark

So sad and disappointed to hear that again the Kenyan govt wants to cut up Uhuru park where @WangariMaathai laid down her life. She did so to stop land grabbing of this precious public space in #Nairobi #UhuruPark #LestWeForget !

The JUBILEE govt don't care about anything, unemployment, loans interest a burden and now they are destroying Uhuru park. Merciless people who don't care about environment and next generation. #uhurupark #HandsOffUhuruPark #KOTLOYALS #KOT

Wangari Maathai twisted the arm of foreign govts to stop the destruction of Uhuru Park under Moi? They dragged her, beat her, threatened her, & vilified her. She only lived because she was known internationally. Does China care? We need someone whose twice the person Wangari was.

No Pay, No Work - Nairobi Garbage Collectors Litter Streets
Tagged:
Copyright © 2019 allAfrica.com. All rights reserved. Distributed by AllAfrica Global Media (allAfrica.com). To contact the copyright holder directly for corrections — or for permission to republish or make other authorized use of this material, click here.