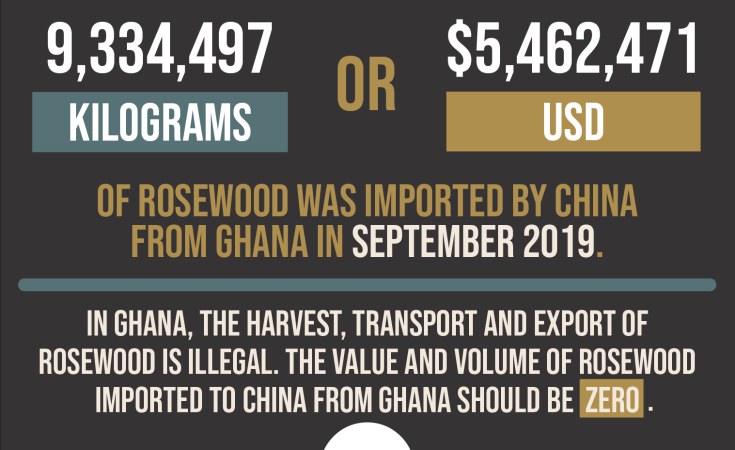 The Environmental Investigation Agency (EIA) is releasing a new web-based tool that allows Ghanaian citizens to know the quantity and value of illegal rosewood imported into China from Ghana every month. Using data available for the month of September 2019, the Rosewood Revealed webpage shows that over 9,330 tons of rosewood, worth over US$5.4 million, has been imported into China – in breach of Ghanaian regulation prohibiting the harvest, transport and export of the species. In addition to violating national laws, these exports raise serious questions about Ghana’s implementation of the Convention on International Trade in Wild Species of Fauna and Flora (CITES), since the West African rosewood species has been protected by the international convention since 2017.

In July 2019, EIA released BAN-BOOZLED: How Corruption and Collusion Fuel Illegal Rosewood Trade in Ghana . The investigation and report findings pointed to a massive institutionalized timber trafficking scheme, enabled by high-level corruption in the forest sector. The report showed that despite a fifth ban in place since March 2019, the illegal trade in West African rosewood (Pterocarpus erinaceus) continues to flourish in Ghana.

In response to national and international outrage following the release of EIA’s findings, two investigations were launched in Ghana. The “Committee to Investigate Allegation of Corruption in Rosewood Trade in Ghana,” announced by the Ghanaian Minister for Lands and Natural Resources, is expected to investigate the rosewood sector and propose remedial actions in the coming weeks. In addition, the Office of the Special Prosecutor simultaneously decided to investigate the matter.

In order to support these important investigative efforts, as well as to allow the Ghanaian public to monitor what is happening in its vulnerable forests, EIA has built a webpage to be updated monthly – contingent upon data availability. The webpage shows volume and value of rosewood imported into China from Ghana every month. Given Ghana’s ban, the number should be zero. Yet, according to the September 2019 data, Ghana still emerges as one of largest exporters of rosewood in West Africa.

This is particularly significant in that Ghana is to become the first African nation, and the second country in the world, to issue Forest Law Enforcement, Governance, and Trade (FLEGT) timber licenses under its Voluntary Partnership Agreement (VPA) with the European Union (EU) in the coming months.

The persistence of the illegal rosewood trade also raises doubts about the implementation of CITES in the country. Since March 2019, the issuance of CITES permits for export of rosewood has been strictly prohibited in Ghana, nevertheless the species continues to be exported out of Ghana into China. Since March 2019, a total of 112,535 tons of Ghanaian rosewood has been placed on the Chinese market.

Kidan Araya, Africa Program Campaigner at EIA, says: “The data we are making publicly available is of utmost importance for the forests in Ghana and the communities that depend on them. It indicates that the illegal plunder of natural resources continues unabated in the country, despite public commitments made at the highest level of government.”

Many countries in West Africa are facing similar challenges, trying to combat rosewood tree poaching and enforce the CITES Convention. A regional approach – including the adoption of a zero export quota by all West African range states until they meet the CITES Appendix II requirements for sustainability and legality – should be one of several urgent measures taken.