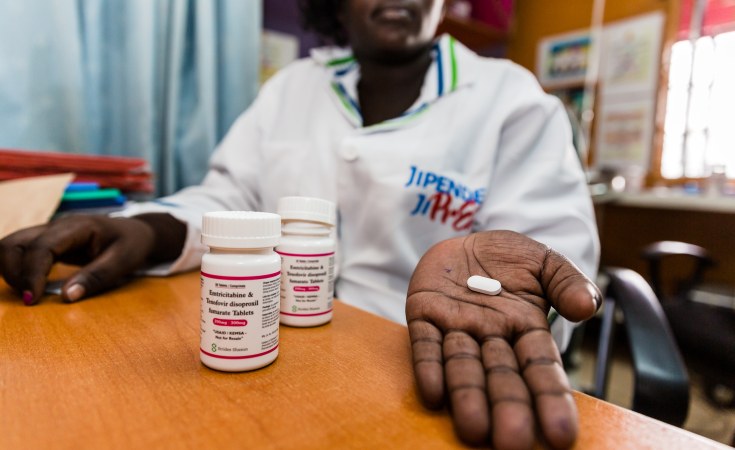 Nairobi — In June 2017 the World Health Organization (WHO) updated their list of medicines deemed essential, these are drugs that every person should have access to, should they need it, no matter where they are. Pre-exposure prophylaxis (PrEP) to prevent HIV infection made it to that list. Kenya is the second country on the continent, after South Africa, to have introduced pre-exposure prophylaxis guidelines.

About 1.5 million people are living with HIV in Kenya and about one million are on treatment. In an effort to to prevent new HIV infections and to improve the quality of life of millions of Kenyans, in July 2016, the Ministry of Health, released HIV treatment and prevention guidelines recommending provision of immediate initiation of  antiretroviral therapy (ART) and PrEP use among uninfected partners at high risk of contracting HIV. One of the biggest barrier to PrEP implementation across targeted population in Kenya has been the stigma associated with pills, mainly because of lack of accurate information.

"It is true, stigma is there, we can not run away from it but from the community dialogues that we hold, we are making communities aware that even if you continue denying and hiding our heads in the sand, our youths are sexually active as evidenced by a number of teenage pregnancies that we are getting, so it is high time that we start talking about issues of sexual reproductive health openly," says Faith Kiiruthi, PrEP Coordinator, at the health department in the Nairobi County. She says that people should not just associate sexual and reproductive heath services only with contraceptives because it also includes getting information on different health choices, prevention measures and counselling.

Having worked in Kenya for over 25 years, Populations Service International transitioned to a locally registered, independent, Kenyan entity in 2014. Populations Service Kenya works closely with the Kenyan government and other partners to contribute to the reduction of HIV incidence in Kenya. Both PS Kenya and the health ministry encourage men to get tested for HIV.  They are targeting partners of antenatal care and post natal clients, key populations and men in taxi ranks because usually men do not have time to go to health facilities unless they are sick. Natasha Sweeney/PSI
28-year-old Kevin Okonji is a Communications Officer and a PrEP Champion at Health Options for Young Men on HIV/AIDS/STI (HOYMAS) in Nairobi.

They have also established projects where safe spaces are provided for young people, key populations through peer support groups, community dialogues and outreaches where they are able to talk about any sexual issues without fear of being stigmatised.

"When I started using PrEP pills there was a lot of stigma and discrimination because of lack of information, some thought the pills were for HIV positive people," says 28-year-old Kevin Okonji, a sex worker and communications officer at Health Options for Young Men on HIV/AIDS/STI (HOYMAS).

The 2015 WHO guidelines for HIV prevention, treatment and care made recommendations that PrEP for HIV-negative people who are at-risk of HIV infection are essential. The populations at risk of contracting HIV include those that are unable to negotiate condom use like sex workers, men having sex with men, those in a relationship with someone living with HIV, and people who do not use condoms.

HOYMAS is an organisation based in Nairobi advocating for the rights of men having sex with men, sex work and support its recognition as work. It also advocates for universal access to health services, including primary health care, HIV and sexual and reproductive health services.

"We have outreaches where we take all the services to the community, mostly for follow up purposes because not everyone is in the position to come to the clinic. If we realise that someone who had started using PrEP and ART did not show up to collect their medicine we are are able to take the pills to them", Josephine Wanjuru, Clinical Team Lead at HOYMAS. 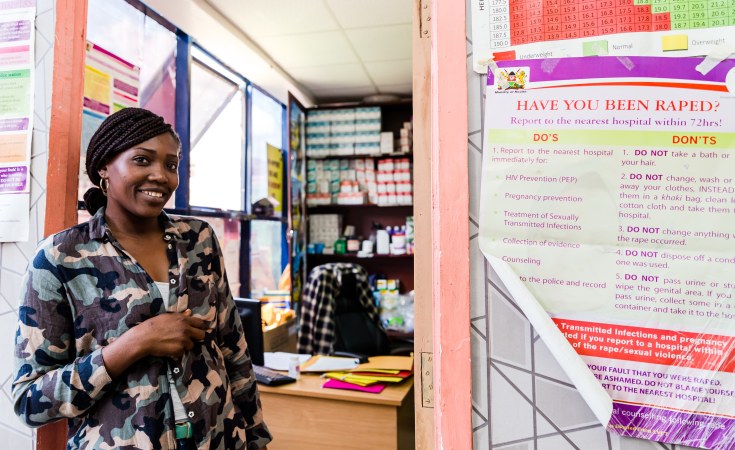 Natasha Sweeney/PSI
Lucy Adhiambo is a Peer Educator at Bar Hostess Empowerment & Support Programme (BHESP) which is an organization for and by sex workers, women having sex with women (WSW), women using drugs and bar hostesses in Kenya.

The organisation holds support groups to support young men who are on PrEP where they talk about challenges like stigma and side effects and how to to overcome them.

Kevin Okonji, who has been with the organisation for four years and has been using PrEP for the past two years, said he experience a number of side effects shortly after starting on the pills, some of them were insomnia, nausea and headaches which subsided after three months.

He cites stigma as one of the challenges he faced when he started taking the pills. Like Okonji, Slyvia Okoth said she also faced a lot of stigma from the community but now thing are better as communities have been sensitized. Silvia Okoth is a 24-year-old PrEP champion, peer educator on sexual and reproductive health and a sex worker working with Bar Hostess Empowerment and Support Programme (BHESP), an organization for and by sex workers, women having sex with women, women using drugs and bar hostesses in Kenya.

"Our advocacy team has done a good job in sensitizing the community about PrEP, they explain to communities that PrEP is just a preventive measure and that just because someone is taking PrEP it doesn't mean that they are HIV positive", Okoth says.

BHESP encourages sex workers to use dual protection - PrEP and condoms as a preventive measure because PrEP does not protect one from other STIs and pregnancies. The clinic also provided different types of contraceptives to sex workers and the most preferred measures are long term contraceptives like the implant which lasts for three years. She said when PrEP was first introduced some sex workers would get beaten up by their clients when they come across bottles of PrEP in their bags thinking that they may be HIV positive but now clients have knowledge of what PrEP is for. These days she is even able to take the HIV tests to encourage some of her clients to get tested.

Because sex workers are vulnerable and often don't have control and can't negotiate safe sex they usually get physically abused. The organization has a paralegal team that provides assistant for sex workers that may suffer any gender based violence and should they wish to open cases against their abusers, the paralegal team assists and guides them. The facility has a safe space where sex workers come in to relax and talk about their experiences, watch television, listen to music or even take a nap without any questions asked.

Worldwide, an estimated shortage of 18 million health workers is anticipated by 2030, a record 130 million people are currently in need of humanitarian assistance, and disease outbreaks are a constant global threat, according to the WHO.

Outreach work and peer educators play a vital role in organisations like BHESP and HOYMAS in bringing the clients to the health care services given the shortages of health workers and the stigma and difficulties people often face accessing information and services. These organisations train sex workers as peer educators to spread information to their peers on advocating for safe sex, reproductive health and other HIV prevention measures. These peer educators who are sex workers themselves go to places they identify as hot spots which are certain streets where sex workers would normally wait for client and bars.

Since the WHO describes self-care interventions as people-centred, these organisations are on the right path in improving health and well-being of those who use these services.

Uganda, Tanzania Top In East Africa for Antiretroviral Use
Tagged:
Copyright © 2019 allAfrica.com. All rights reserved. Distributed by AllAfrica Global Media (allAfrica.com). To contact the copyright holder directly for corrections — or for permission to republish or make other authorized use of this material, click here.