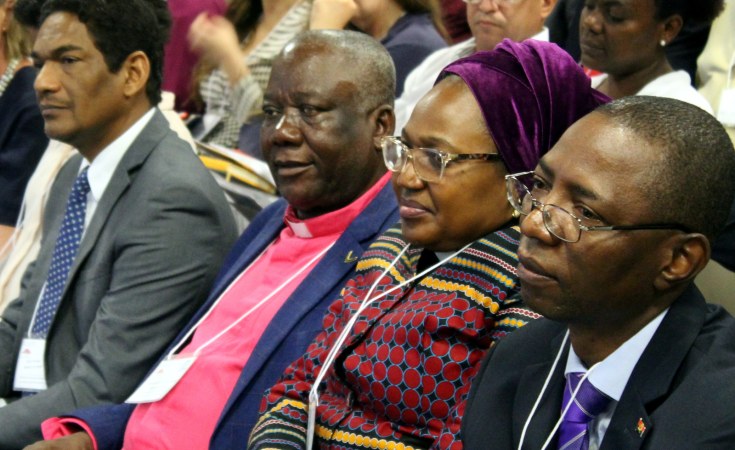 Luanda, Angola — The Angolan Council of Christian Churches (CICA) and the Anglican Diocese of Angola convene leaders from government and civil society to announce their leadership in advocacy for malaria elimination.

Anglican Bishop André Soares announced the formal launch of an Interfaith Commission for the Fight against Malaria on December 2 nd during a high-level panel featuring faith, government, and non-governmental leaders. He invited representatives from all faith communities to participate in this commission, spearheaded by the Anglican Church, CICA, and Caritas.

"We have come here today, on the 2nd of December, for the church to make a commitment, starting right now, to unite in the fight against malaria," said Bishop Andre Soares. We will consolidate our efforts, with all religious leaders united together."

The newly launched commission will advocate for the elimination of malaria – a preventable disease that continues to threaten the health and well-being of Angola, as noted in the 2019 World Malaria Report released last week;11,814 malaria deaths and over 5 million malaria cases were reported in the country in 2018.

Rev. Deolinda Teca, Secretary General of CICA, opened the event with the challenge that "Our unified presence today is a signal of what we want to achieve. We are willing to work. We have to work." She addressed an audience of more than sixty people, gathered to reflect on the critical role of religious leaders in advocacy and action for malaria elimination. Acknowledging their role in the broader African Union initiative 'Zero Malaria Begins with Me,' leaders and bishops from many Angolan faith communities took part, including representatives from Angolan Council of Christian Churches (CICA), the Episcopal Conference of Angola and São Tome (CEAST), Caritas, the Anglican Church, and the Evangelical Alliance. Non-governmental organizations active in Angola's fight against malaria also participated in the event, including ADPP, MENTOR, PSI, and World Vision, alongside Esso and Unitel from the private sector, and representatives from the United States Agency for International Development (USAID) and various United Nations agencies.

The participants recognized the essential role faith leaders are already playing within their communities through practical action in coordination with the Ministry of Health. Rev. Antonio Domingos, Anglican priest from Benguela, explained that the pastor has an essential role in shaping community understanding of malaria and its causes, and for him that means education even at a funeral: "I'm not going to do a funeral for someone caused by malaria and say 'God gives and God takes away life' when I know it is actually the mosquito who takes away."

In addition to advocating within their faith communities, Methodist Bishop Gaspar João Domingos said religious leaders have a role to play in supporting financial accountability for malaria elimination. "The churches can play a big role in monitoring fund use and ensuring that funds are being spent as their donors intended. We need transparency in order to have good partnerships, so that we can do the monitoring to ensure that the values spent on malaria efforts are spent in the intended way." 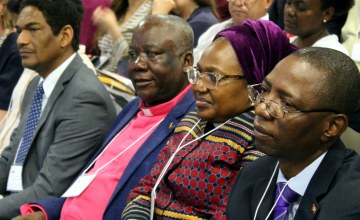 Rev Domingos's call for church involvement strengthened the insight shared by the Rt Revd. Michael Beasley, Liaison for Global Health for the Anglican Communion.   He shared theological reflections on the mandate of the church to engage in social action, helping bring about the flourishing that God seeks for human beings.

Church involvement in malaria is not new, as evidenced by the decade-long work referenced by Dr. Mufinda. He described efforts made since 2008 in remote communities near the Namibian border, in which the Anglican Diocese of Angola and CICA have partnered with faith leaders and civil society to end malaria cases and deaths, in partnership with the J.C. Flowers Foundation, the Isdell:Flowers Cross Border Malaria Initiative, and FLAME (Faith Leader Advocacy for Malaria Elimination).

Various partners, domestic and global, are highly focused on the fight against malaria in Angola. USAID Representative Julie Nenon declared that malaria is USAID's top priority in the country, and that USAID spends more than $22 million each year to fight against it. Through the President's Malaria Initiative, USAID works with the Angolan government and local partners. Nenon reflected, "It is important that communities have access to bednets. To that end we've been very happy to work with the J.C. Flowers Foundation on bednet distribution campaigns. It is in this type of partnership that we find success. We have the same goals, the same hopes, and the same aspirations."

Representatives from the Government of Angola, including Dr. Franco Cazembe Mufinda, Secretary of State for Public Health, equally voiced their commitment to malaria elimination and welcomed support from faith leaders. Dr. Mufinda noted "We take the fight against epidemics in our country so seriously that we see them as issues of national public security that threaten our people." He acknowledged a reduction in malaria cases and deaths and noted that even more work needs to be done to continue to strengthen prevention through indoor residual spraying, bednets, and ADECOS, who can do simple treatment of malaria. "We expect the support of the church in this," he said.

Participants left motivated by the words of the Executive Secretary of the Evangelical Pentecostal Mission of Angola, Rev. Abílio Francisco: "The enemy is identified. It is a common enemy. Where do we find it? In our streets. In our living rooms. And if that weren't enough—it has even come into our bedroom. So to be attacked, we need to put forth a very strong effort. We will have to put forth a united front to win against this enemy."

Tagged:
Copyright © 2019 J.C. Flowers Foundation. All rights reserved. Distributed by AllAfrica Global Media (allAfrica.com). To contact the copyright holder directly for corrections — or for permission to republish or make other authorized use of this material, click here.