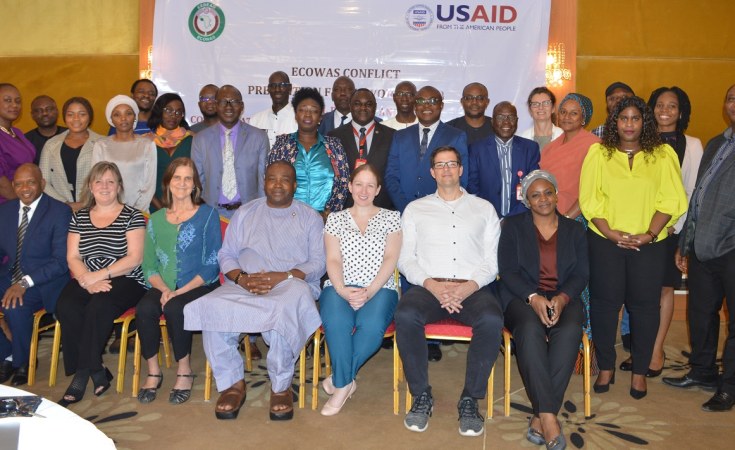 The Focal Points Directorates of the ECOWAS Conflict Prevention Framework (ECPF) are facilitating the coming into prominence of response planning strategies for emerging crisis situations in West Africa.

In this vein, a Five-Day retreat to strengthen collaboration and synergy in the implementation of the ECPF Plans of Action (PoA) began on the 20th of January 2020 in Abuja, Nigeria.

The retreat which is holding in collaboration with the United States Agency for International Development’s Reacting to Early Warning and Response Data (USAID REWARD), is meant to provide a platform of ensuring the institutionalization of structured processes for initiating and collaboratively planning of responses to crisis and conflicts, among others.

Welcoming participants to the retreat, the ECOWAS Commission’s Director of Political Affairs Dr. Remi Ajibewa stressed the importance of human capacity building and skills updating as essential elements in the regional community’s strategic planning efforts on peacebuilding and conflict prevention.

Represented by the Commission’s Head, Democracy and Good Governance Division Dr. Eyesan Okorodudu, he maintained that capacity enhancement for crisis response planning requires soul searching, progress assessment as well as putting the skills acquired proceeding 2020 to test with a view of determining how collaborations and synergies can be expanded while banishing working in silos and clinging onto spaces to the detriment of institutional deliverables and collective achievement of goals.

Speaking on the value of aggregating inputs from various Directorates, he stressed the need to plan around scenarios developed and also in response to certain political situations in the knowledge that when fundamental learning curves are missed, occurring crisis might end up being escalated rather than being prevented or ameliorated.

In his goodwill message, the Chief of Party of the USAID-REWARD Mr. Diallo Alimou stressed the importance of continuity in working with ECOWAS and its relevant Directorates, also through the ECPF Secretariat.
He stated that The USAID REWARD is poised to assist its Regional Peace and Governance Office in supporting ECOWAS, national as well as local actors to enhance conflict, early warning and response systems in order to reduce the risk of violence in West Africa.

He disclosed further that the USAID REWARD team intends to build on the two projects being supported in the region which has led to improvement in the ECOWAS response to early warning recommendations as well as the national and local stakeholders’ responses to electoral violence triggers.

Mr. Alimou expressed the hope that the tools formulated in aid of the ECOWAS peacebuilding processes will be used in addressing the pervasive threats to Human Security problems in the region while acknowledging the imperativeness of developing more effective and integrated approaches to promoting peace and stability besides collaborating with various stakeholders at the strategic level, and across sectors.

He called on ECOWAS to take ownership of these tools being developed and institutionalize them to address the human security agenda for the region through collective action demonstrative of the added value of joint collaborative engagement.

Apart from coming up with, recommendations for strengthening the operationalization and institutionalization of the ERPF, participants were equipped with developed coordinated responses to human security challenges in any one a particular context.

It also featured response planning for the Lake Chad Basin with a view of fostering a community of learning through After Action Reviews.

Read the original article on Ecowas.

Tagged:
Copyright © 2020 Economic Community of West African States. All rights reserved. Distributed by AllAfrica Global Media (allAfrica.com). To contact the copyright holder directly for corrections — or for permission to republish or make other authorized use of this material, click here.