West Africa: ECOWAS Commission and Spain to Strengthen the Voice of Women in Peace and Security 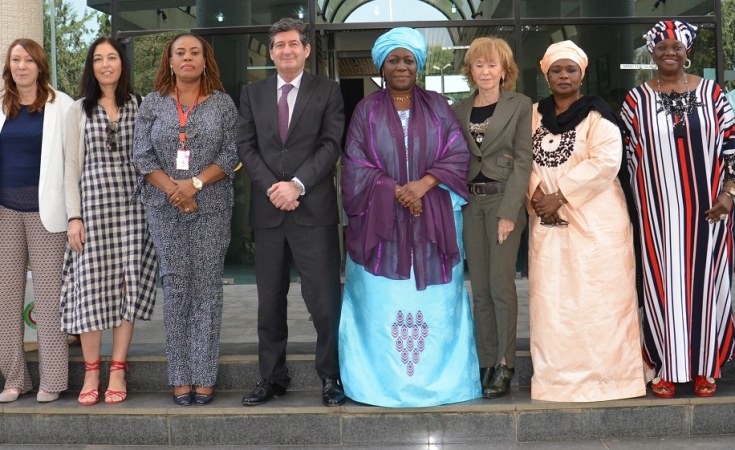 Photo: ECOWAS
ECOWAS Commission and Spain to Strengthen the Voice of Women in Peace and Security.
Economic Community of West African States (Abuja)

The Commission of the Economic Community of West African States (ECOWAS) and Spain are to strengthen women’s voice in furthering peace and security in West Africa.
The Commitment was given on the 17th of January 2020 in Abuja, Nigeria during a courtesy visit of the President of the Spanish Council of State Mrs. Teresa Fernandez and her team to the ECOWAS Commission.
Conferring with the Spanish delegation, the Vice President of the ECOWAS Commission Madam Finda Koroma reiterated the Commission’s recognition of the role of women in fostering peace and security in the region.
Noting that women, children and vulnerable groups are often caught in the middle of conflict, Vice president Koroma stated that beyond dealing with the issues of violent extremism and political instability, the ECOWAS Commission is interested in post-election issues and working with stakeholders and development partners to ensure women are involved in both peace building and conflict resolution activities to promote sustainable development in the region.
Acknowledging that the creation of a network of an active crop of women will be of help, Vice President Koroma stated that the involvement of the ECOWAS Women’s Forum will also be useful in galvanising the needed support in this regard, in addition to driving the process of administering the call for proposals as well as sharing of project documents.

Vice President Koroma also expressed concerns about the peaceful conduct of the elections that are coming up in six ECOWAS Member States and stressed the need for adequate preparations to be made in order to forestall possible attempts by terrorists to take advantage of the situation.
Madam Koroma cited the Gambian stabilisation Fund, as a laudable ECOWAS initiative set up with the support of partners in aid of humanitarian interventions meant to take care of social and economic issues that emerge in the political landscape.

Mrs Teresa Fernandez stated her delight about the Spanish collaboration with ECOWAS, the work being done for women and peace as well as the review of the existing Memorandum of Understanding between both sides on the subject matter.

Stating the high need for women to drive the peace processes, she noted that if the cost of conflict is worked out and invested in peace, a lot more can be achieved.
According to the former Deputy prime Minister of Spain, who is also now the President, Women for Africa Foundation, since women are always in the middle of conflict, they have to be trained to manage same.
Poverty and inequality were identified as the twin scourge that sustains conflict. Mrs Fernandez pledged to work with international organisations such as ECOWAS to continue to advance the cause of women as true mediators.

All stakeholders, she maintained, will need to join hands to train women and get them involved in peacekeeping and peace building while ensuring that they are integrated into the processes of resolving conflicts, among others.

She disclosed further that a project known as Woman’s Alliance for Peace is being put together and sought the support and buy-in of the ECOWAS Commission even as she expressed Span’s desire to get programmes running in all of the countries it is collaborating with in 2020.
She added in this regard: “Make women your mediators in conflicts. Support your women we want women to be heard now”.
The ECOWAS Commissioner for Finance, Mrs. Halima Ahmed, Director External Relations Mr. Jerome Boa, Head of Division, political Affairs and International Cooperation Dr. Onyiye Onwuka as well as Principal Programme Officer, Human Security and Social Affairs madam Raheemat Momodu were on hand to support Vice President Koroma in presenting to the Spanish delegation, efforts being made by the ECOWAS Commission on woman’s participation in peace processes as well as projections for the future.

Read the original article on Ecowas.

Tagged:
Copyright © 2020 Economic Community of West African States. All rights reserved. Distributed by AllAfrica Global Media (allAfrica.com). To contact the copyright holder directly for corrections — or for permission to republish or make other authorized use of this material, click here.