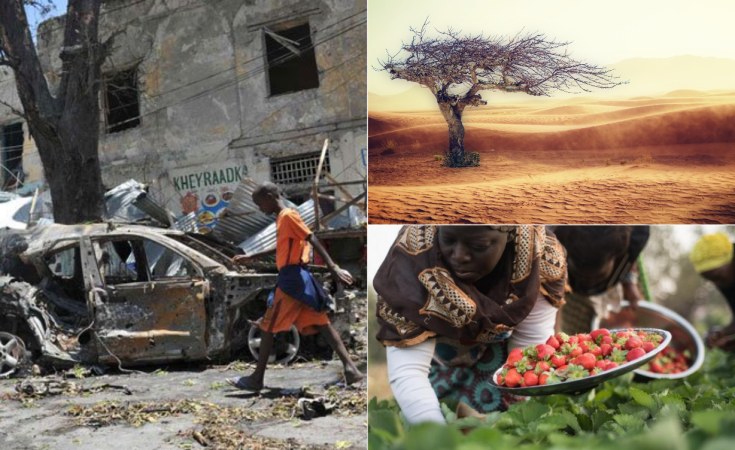 Pixabay/Dalsan Radio and Georgina Smith/UN Environment
This three-edged front of climate change, food insecurity and conflict is enough to shake the very foundations of peace in Africa, even ones established by institutions like WILPF for over 100 years, said Joy Ada Onyesoh, the International Board President of the Women's International League for Peace and Freedom.
allAfrica.com
By David Njagi

Nairobi — Former UK foreign secretary, Jeremy Hunt, linked climate change to the growing conflicts in Africa, during his five-day visit to the continent. Hunt stopped in Nigeria and raised concern about worsening poverty driven by climate change, and how this is becoming a significant contributor to instability in some countries.

He is not the first to highlight how the climate crisis is affecting peacebuilding efforts and he won't be the last - in 2019 The Economist published a piece that said "as global average temperatures rise, dry regions will get drier and wet regions wetter, with more extremes and greater variability". How this affects Africa, it further argued, was because it worsens poverty where, for instance, food crop growers struggling to adopt may find themselves locked in conflict with pastoralists when they herd their livestock into village farms or water sources.

And when such climate driven conflicts flare up, food insecurity balloons too, according to Joy Ada Onyesoh, the International Board President of the Women's International League for Peace and Freedom (WILPF).

"When there are conflicts certain communities are cut off completely, meaning they cannot farm because of the conflict and violence in that country or in that community. When they are not producing they will not have enough harvest," said Onyesoh while at the women, peace and security conference held in Nairobi.

Yet UN SDG Goal 16 states that there cannot be sustainable development without peace, stability, respect for human rights and effective governance, as Goal 2 aims to have everyone access quality food produced through sustainable agriculture.

This three-edged front of climate change, food insecurity and conflict is enough to shake the very foundations of peace in Africa, even ones established by institutions like WILPF for over 100 years, said Onyesoh.

One solution would be to end poverty and ensure there is zero hunger, another is to ensure that every child is fed and goes to school, while women, the youth and farmers are empowered to feed the continent, said Yego.

That could work if the continent harnesses the power of technology in peace building, using platforms like Youtube and Facebook, like Yego and team are applying them to implement SDG16 on peace, justice and security through influencers.

Yet technology uptake, especially in food production among African women is still low, according to the 2018-2019 digitization of African Agriculture Report, where only 25 per cent of them are known to use technology to boost production and revenue.

Such gaps are part of research that is being done at the African Women's Studies Center at the University of Nairobi (UON), as a way of giving voices to women in peace and security issues, said Dr Mary Akinyi Otieno, research associate.

According to Otieno, there are traditional platforms that can engage the African woman in peacebuilding where technology has failed to take.

She suggests that African countries can have their own Women Council of Elders, which can be decision-making platforms to fight off some causes of conflicts like early pregnancies, female genital mutilation and patriarchy.

"The Council of Elders is where decisions of the community at the grassroots are done. As women elders we can find ways and means of dismantling these causes of conflict which are a stumbling block to our development as a country, a nation and the world over," says Otieno.

She warns that although studies show that women are the majority all over the world, they should not use their numbers to perpetrate violence and become aggressors.

"We should protect what we give birth to and not destroy what we have nurtured for long. If women can be given a chance in the peace processes, then we would really develop a country because there are some perspectives that women have which men do not know," says Otieno.

Yego argues that social media platforms could be used by opinion shapers to gain the confidence of young people, on why economies built on decency and respect for human rights will be the pillars upon which Africa's peace agenda can be mainstreamed.

"We are telling the story of young people in the developing world who are doing something in their communities to better the lives of others through social media. It is proving to be a powerful advocacy tool," he said.

And Ann Atambo, president of WILPF Kenya chapter, is using technology to encourage women to share their experiences - telling the world what they've done to rise above their challenges on a podcast called Kenyan Women's Voices.

But more importantly, the podcast helps women in Kenya map their experiences in peacebuilding, where they can be able to look back 10 to 20 years later and take stock of what they have achieved, and perhaps use the documented evidence to plan what needs to be done differently, said Atambo.

That has helped women, even marginalized ones, to understand and own instruments that involve women in peacebuilding like the UN Security Council Resolution 1325, and SGD5 on achieving gender equality and empowering all women and girls, she said.

"The root cause of conflict for women varies. But if they can have access to power, resources, leadership as well as education, they can be able to improve themselves in order to get over all the barriers that are holding them back from self-actualizing," said Atambo.

Previous Story
'Conflict is Like a Cough, If You Don't Treat the Root Cause, It Comes Back'
Next Story
How Social 'Tipping Points' Could Limit Global Warming

'Conflict is Like a Cough, If You Don't Treat the Root Cause, It Comes Back'