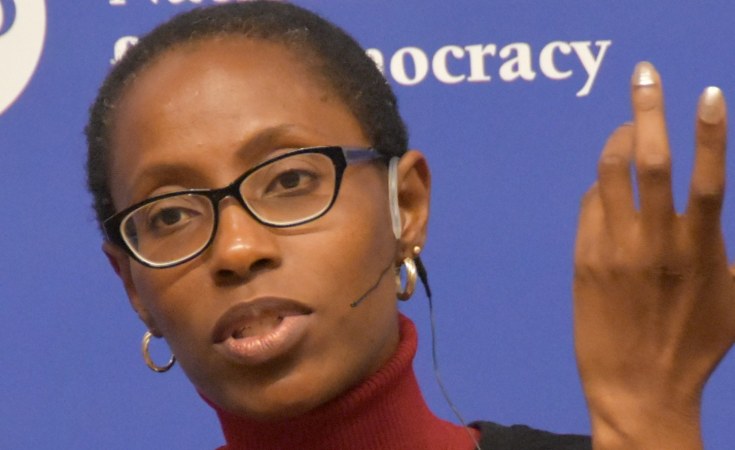 Africa's most populous country and largest economy has become fraught with insurgent attacks, kidnappings for ransom, violent protests over pollution and joblessness, and conflicts over scarce resources of land and water. Many citizens are asking, "Can Nigeria be saved?"  'Yemi Adamolekun, is executive director of Enough Is Enough Nigeria (EiE), aimed at ensuring that the country of over two hundred million people becomes an example of accountable democracy rather than a failed state. She spoke to AllAfrica about her work.

EiE is a small organization with few resources, yet you seem to be everywhere. You have hundreds of thousands of Twitter followers @EiENigeria – and a social media reach that is many times that. You have radio broadcasts in multiple local languages across Nigeria. You host public meetings. What's up with all that? How do you make it work?

EiE is a loose network working through and with partner organisations. It's a coalition of people focused on good governance and public accountability. We have a radio program called 'Office of the Citizen'. The concept is that, while Nigerians tend to look at elected officials as the most important citizens, we say that citizens are the highest office holders in the land. If not for citizens, elected officials would not have work to do. Because we're citizens, we get to vote them into office, and they are meant to represent us. It is we who employ them.

Officials are meant to represent citizens – we employ them!

Using that concept, we have broadcast radio programmes on stations in 25 states. The show is an hour. It's live, and it's a call-in program. We spend the first 10 or 15 minutes laying context on a topic - whatever it is - from local government autonomy to sexual-based violence to farmer/herder clashes. We look at the issues most relevant to that community. After the initial segment providing factual information, listeners call in for 45 minutes to ask questions on the issue, to talk about their concerns and to seek clarification. We provide as much information as we can.

The idea is to arm citizens with information to influence how they act. It's not a ranting-fest. The idea is not to call in to talk about everything that's wrong, and how you're tired of it all. The purpose is to help them channel weariness, or their anger, into specific actions communities can take.

How do the things you're doing relate to the possibilities for a peaceful Nigeria?

Part of why Nigeria is unpeaceful is the huge amounts of poverty, scarce resources available to the people who most need them, people fighting over those resources. Insecurity grows out of distrust - and people being desperate to survive. There are also biases that have been passed on, be it ethnic or religious or geographical, that affect how people relate to one another. In the work that we do, people have an opportunity to discuss all those beliefs, fears and concerns. And out of that, we hope, comes greater understanding and a willingness to work together to improve the prospects for everyone.

Part of why Nigeria is unpeaceful is people being desperate to survive.

During elections, for example, we did a lot to help with violence in Katsina. People talked about it on the broadcasts. There was a whole campaign in the area on voting and non-violence around elections. People involved in that work came on the programmes and gave feedback – so audiences just kept hearing that message, over and over again. It made them a bit more conscious of it.

Can you see other results from providing information to a community and from the conversations that result?

It's been very interesting. Citizens have used the platform very well to get results in their communities, for example, to obtain services that should be delivered. In Niger State, I believe it was, citizens got the roofs of schools repaired. Participants in the discussions got a health-care center reopened in Osun State. In Edo, they were quite vocal about joining the open government partnership. So, yes, we have been able to see a useful impact.

Another very interesting example is a community in Lagos State that wanted to be metered, so that they could access electricity. They had been appealing to the electricity company for over a year without success. When they came on the radio program and talked about their problem, the electricity company called them the next day and set up a meeting. So it's been really good to see people participate and to observe the response.

When threats of violence keeps officials from meeting citizens, EiE provides an on-air venue for dialogue.

Post elections, we have used broadcasts as an opportunity for members of parliament to engage their constituents, because they have been very averse to having town hall meetings – public town hall meetings to engage constituents. Opposition members and others can send in thugs to the physical venue. It can get violent. So we said. "Okay, fine, don't do physical meetings. But converse with your people – the people you represent, the people who elected you. Do a radio town hall." So public officials come on the radio for two hours, and they must explain and defend their policies and their actions – or their inactions.

What do you hope to do better?

We're trying to do better at the storytelling part of what we do. We see that when people hear success stories, they are more inclined not only to participate on the show, but also to take action themselves, in the communities. It is important for everyone to know that action on the part of citizens can achieve change – small change at first, but eventually large changes.

You have an elite international education. You could have a career anywhere. Why are you back in Nigeria?

Because I think Nigerians deserve better. Our country has enormous natural resources, but it also has enormous human resources. What Nigeria need is officials – both elected and appointed – who are accountable to the citizens they are required by law to serve. I want to do everything I can to ensure that happens. If all Nigerians determine to hold their public officials accountable, Nigeria will be a prosperous, peaceful country.

There is so much pessimism in Nigeria. Despite courageous people working for peace, entrepreneurs starting businesses, a wealth of cultural creativity - music and art, many people seem to be losing hope. Do you believe Nigeria can be saved?

Yes, we must believe. And we must act. We have no choice.

'Yemi Adamolekun  has worked in public and private sectors for two decades. Besides heading EiE and sitting on its board, she also sits on the board of Kaleyewa House, an NGO founded by her late mother focused on the elderly and other boards. In 2018, she was named one of the Most Influential People of African Descent, by MIPAD, a global civil society initiative. She has a mathematics and economics degree from the University of Virginia; an MSc in Development Studies from The London School of Economics, and an MBA from Oxford University's Said Business School.

AllAfrica's reporting on peacebuilding is supported by a grant from Carnegie Corporation of New York, a philanthropic foundation.