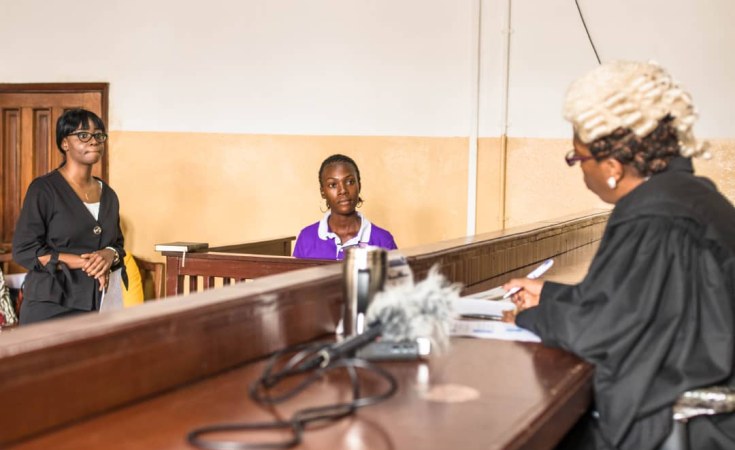 Mariatu Sesay was still a schoolgirl in Sierra Leone when she fell pregnant. Had it not been for her principal and class teacher, she would not have been able to finish her education because a draconian government ban excludes pregnant girls from class and from taking their exams. Her principal’s and class teacher’s defiance, however, gave her the support she needed to persevere. “Some of my schoolmates used to provoke me, but I summoned up courage because it was not my wish to be like that. I took my final exams and I was promoted to JSS2 with a 74 average,”  she says.

Teenage pregnancy in Sierra Leone is widespread. By age 19, almost half (45%)  of all girls will be mothers. The governmental policy banning visibly pregnant girls from attending school is thus effectively preventing a whole generation from getting an education. The ban is illogical, immoral, and contravenes a huge number of regional and international mandates and commitments. But victory in ending the school ban is in sight.

Since the government of Sierra Leone made the ban official in 2015, a coalition of grass-roots groups, girls activists and their adult allies have been advocating for its wholesale revocation. Being able to draw on the collective skills and expertise of its members, the coalition, under the leadership of Equality Now and WAVES, a local community based organisation, ultimately managed to take the Sierra Leone government to the ECOWAS Regional Human Rights Court.

Perhaps most importantly, however, the coalition has provided a powerful platform for girls impacted by the ban to make their stories heard. At the end of last year it took over a Courtroom in Central Freetown to convene a special People's Court. A feminist legal team and special judge heard case after case of girls who had been denied access to the classroom because of their pregnancy  - but also from girls, parents and teachers who had found ways to push back against the ban and show us all that another way is possible.

Like Mariatu, Juliet YS Brown became pregnant while at school. Although Juliet’s mother wanted to remove her, her principal encouraged her to remain and when she took her final exams a week after she gave birth, she passed with flying colours. She says: “I was called a lot of names but I focused.” Today she is a qualified social worker.

In December last year, the ECOWAS court ruled in our favour, declaring the Government of Sierra Leone’s policy “discriminatory and a violation of girls basic human rights” - an extraordinary victory for Sierra Leone’s girls movement. And yet, this fight is more than just a legal one. It is very much a social, cultural and political fight, too.

From the outset opposition to pregnant girls in school has been rooted in paternalistic judgements on female sexuality, which largely ignore or misinterpret the evidence. With our legal victory backing us up, our campaign needed to double down on challenging these misconceptions - the most persistent one being the idea that pregnant girls in school are an uneconomic and immoral Western idea that is at odds with Sierra Leone’s traditional culture and values. A view which our research and our work around the country shows, is far from the truth.

Our high teen pregnancy rates are caused by a complex mixture of patriarchal violence and gendered poverty, in which an environment of transactional sex, child labour and overcrowded living conditions are set against a culture of female subordination. This is reflected in high rates of Female Genital Cutting, child marriage and gender-based violence, and borne out by figures showing that poorer uneducated girls in rural communities are most likely to become teen mothers.

As Mariatu’s experience shows, support for the ban even within the Sierra Leonean education system is far from unanimous. Prior to the government’s first directive in 2010 and subsequent 2015 policy, grassroots communities and their schools managed cases on an individual basis, often with great sensitivity. They knew that with the right support structures pregnant schoolgirls do not have to be left behind.

Our experience proves that change is possible but it has to be fought for. President Maada Bio of Sierra Leone recently announced a “radical inclusion” approach to education and under the leadership of his new Minister of Basic and Senior Secondary Education, Dr Moinina Sengeh, has asked for a genuinely evidence-based policy. In response, Dr Sengeh has constituted a broad-based Task Force, with other ministries, civil society and academia among others, to draft a new policy that will guarantee all girls full access to their education and schooling rights. Purposeful in collaboration with other local Coalition Members are working on innovative ways to bring girls into the process, co-designing and validating the policy with them - for them.

Even with a new policy, the culture of entrenched patriarchy will not disappear overnight, but when our government joins us – the citizens and civil society - to declare that all girls must be supported to reach their full potential and provides the basis to challenge and dismantle the harmful stereotypes and attitudes that undermine girls, we feel hopeful that change is possible. The Sierra Leone government made Free Quality School education for all its signature policy. Working with us to finally guarantee this laudable initiative for all girls brings all of us closer to achieving our collective goal.

Chernor Bah is Co-Founder/Chief Executive Officer of Purposeful, a hub for grass-roots groups, girl activists and their allies in Sierra Leone who have spent the last 5 years campaigning to overturn a draconian ban that prevents pregnant girls from attending school