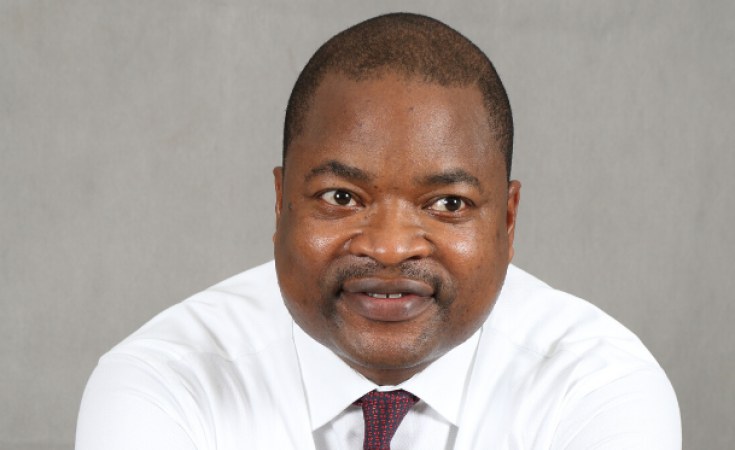 Widely considered as one of the success stories of African democracy with its peaceful political transitions, Benin has lost its shine since President Patrice Talon came to office in 2016. From controversial Halloween night's constitutional changes to going after political opponents including his predecessor President Boni Yayi, there is growing fear that the West African nation is headed down the wrong path.

In late July 2019, the Talon Administration released a list of "wanted" political figures it accused of evading justice in the country with   a decree stopping authorities from issuing identification documents for anyone who did not answer police summons, in a move seen as targeting Talon's opponents abroad.

Four people were killed during the demonstrations. Benin's status declined from Free to Partly Free in the Freedom in the World report, because a new electoral code and a series of decisions by the courts, electoral authorities, and the government resulted in the exclusion of all opposition parties from the April 2019 parliamentary elections.

According to Heritage Foundation 2020 report, Benin continues its slide toward less economic freedom, with scores dropping steadily from a high-water mark in 2016. Its economy is now well entrenched among the mostly unfree.

While fighting corruption in Africa is critical and should be applauded, it becomes very troubling when targets are real and perceived political opponents of a seating President. Such seems to be the case in Benin, where most of those targeted are known to be people with presidential ambitions of their own.

On Saturday April 3rd,   2020 Benin's Court for the Repression of Economic Offenses and Terrorism (CRIET) sentenced in absentia   Former State Minister of Finance Komi Koutché, Talon's top Challenger's   to twenty 20 years in prison and a 100 million CFA francs fine for embezzlement of public funds and abuse of office.

Koutché's sentence made him the latest victim of President's Patrice Talon relentless persecution of opponents perceived to be formidable challengers in the 2021 Presidential election in Benin. Earlier on, in October 2018, multimillionaire Sebastien Ajavon, who had voiced his ambitions for the top job, was sentenced in absentia to 20 years for drug trafficking. Former President Thomas Boni Yayi was kept under de-facto house arrest for 52 days after he criticized one-sided parliamentary elections that sparked bloody street protests. And in August 2019 a court in Benin court banned presidential rival and former Prime Minister Lionel Zinsou from polls for 5 years and   with a suspended 6-month jail term over 2016 campaign breaches.

For those sounding the alarm bells, one of the most cited examples is the frenzied manner in which the Talon administration has gone out to forcefully saddle embezzlement and corruption charges on former Finance Minister Komi Koutché.

Young, dynamic, and hardworking, Komi Koutché is one of the most persecuted members of the previous Administration. Accused of embezzling public funds and corruption, the abrasive manner in which the government has gone about the case , trampling on existing rules and creating new ones has only helped in fueling the feeling that there is more to the case than meets the eye.

To Koutché's camp, the attempts to indict him at all cost are nothing short of attempts by President Talon to take out a potential and formidable rival. In a recent statement from Mr. Koutché's team chronicling a timeline of his judicial travails, the former Minister is painted as victim and the whole process described as a sham and a political witch hunt. 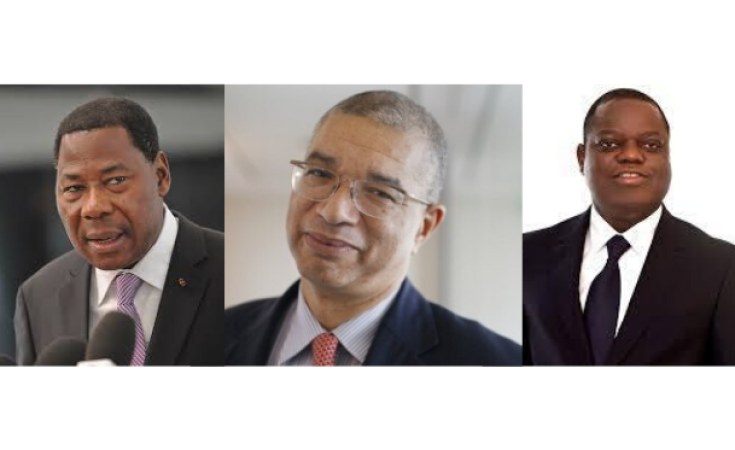 US-Africa Cybersecurity Group
From left to Right, Former two term President of Benin Thomas Boni Yayi, Lionel Zinsou, economist and investment banker who was Prime Minister of Benin from 2015 to 2016, and former presidential Candidate who finished second behind Talon in the 2016 elections, Sebastian Ajavon, Businessman and Former Presidential candidate who finished third in the 2016 presidential race and asked his supporters to vote for Talon are some of the victims of President Talon’s witch hunt.

From the statement, the judicial woes and persecution It all started in July 2017 when the Council of Ministers presided by the Head of State Patrice Talon, released two audit reports. The first audit report was about Benin cotton industry and the second about the management of the National Microfinance Fund (NMF).

The council of Ministers was transformed for the occasion into an indictment court. The council pronounced a staunch indictment on Komi Koutché's Management of the National Microfinance Fund and alleged misconduct by the audit reports.

Joseph Djogbenou, then Minister of Justice, and personal lawyer to President Patrice Talon   and was instructed to initiate legal proceedings against Mr. Koutché. This procedure was faulted by Mr Komi's team as due process was not followed and he was not heard in the proceedings as auditing rules and regulations require.

In August 2017, Komi Koutché filed a complaint before the Benin constitutional court on two counts (the Cotton's audit and the National Microfinance Fund's audit) alleging the violation of his rights to be heard during the audit proceeding as required by law. In December the constitutional court, presided by Professor Theodore HOLO, squashed the cotton audit ruling and declared that the government violated constitutional provisions. The appeal about the National Microfinance Fund (NMF) is yet to be reviewed because the government hasn't responded to the investigatory measure indicated by the Court.

In a bid to better control the judicial proceeding, the current administration saw that Joseph Djogbenou, Minister of Justice responsible for prosecuting Komi Koutché became President of the Constitutional Court, the statement says, and it didn't take that long for him to bring back Komi Koutché's NMF appeal ushering a complete turnaround in the case.

He argued that the lack of hearing during an audit procedure is not a violation of the Constitution. This led to the convocation of Komi Koutché who at that time was out of the country and could not be present within that designated timeframe.

This immediately resulted in the signing of an arrest warrant by the judge. On April 06, 2018, Komi Koutché appeared before a judge who found no reason to arrest him as requested by the prosecutor. By order, he set aside the arrest warrant of April 4, 2018, and stated that disciplinary proceedings will be opened later against Komi Koutché.

July 2018 saw the creation of the Criminal Enforcement of financial and Terrorism Offences Court, CRIET, described by Komi's partisans as a body designed to do the government's bidding. To back this up, they point to the fact that Komi Koutché's files were immediately transferred to the CRIET.

On August 27 after canceling Komi's passport and ordering for his extrajudicial arrest while on visit abroad, Komi Koutché was arrested in Madrid on December 14, 2018, on a fraudulent notification to Interpol of the loss of his passport.

Recognizing their blunder in utilizing a canceled arrest warrant, a new arrest warrant for regularization was issued under the pretext that Komi Koutché did not respond to a CRIET convocation on December 18. Note that at this time, Komi was incarcerated in Madrid. An additional extradition request was made to the Spanish courts.

After close scrutiny of the case, Komi Koutché regained his freedom on January 17, 2019, and the Spanish proceeded to reject the extradition request without the possibility of an appeal, stating that the CRIET could not offer guarantees of a fair trial. 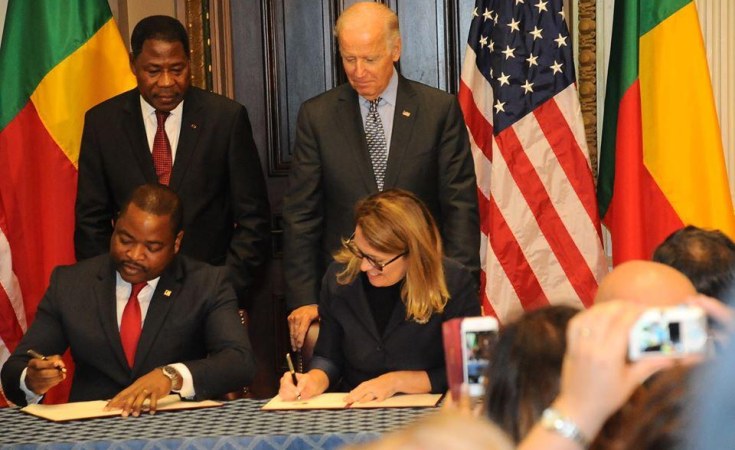 At its 109th session, on July 2, 2019, Interpol, upon reviewing the issue through its legal department, concludes it's a political file and decides to delete all the data in its database about Komi Koutché and moved to notify all its operations worldwide that any police collaboration under the pretext of international cooperation would be a violation of the constitution of the organization. This position applies as well for the French and the Guinean criminal police.

Despite the verdict by the international court and Interpol's decision against proceeding with the verdict, Komi was in September referred back to the CRIET criminal chamber.

The African court of human rights orders the Beninese government to report the abusive decision to cancel Komi Koutché's passport and shall refer the rest of the claims to the fund and in December 2019, the U.S. administration after conducting its findings concluded that the lawsuit is based on political persecution and not corruption charges as claimed by Benin government.

Getting into the new year, Komi Koutché's lawyers were convened on the first appeal. It should be recalled that the lawyers mentioned the regularization warrant of December 27, 2018, issued under the pretext their client had not responded to convocation on December 18, 2018, was pointless since the issuers knew that Komi Koutché was already incarcerated in Madrid during this period.

The appeal was dismissed with the lawyers requested to convene at the Supreme Court for the second appeal.

During a press briefing on the criminal session which opened on March 16, 2020, Special Prosecutor of the CRIET evoked the NMF file for which Komi Koutché is subject to legal actions, among the dossiers to be studied…However this dossier was still the subject of a cassation procedure and the hearing on the cassation was on March 13, 2020. Apparently, the Special Prosecutor without any statement from the Supreme Court already knew the decision which would be taken the day after its press conference.

Unsurprisingly, the Supreme Court dismissed the appeal and returns the file to the CRIET prosecutor. Komi Koutché's lawyer receives a summons to appear for his client on March 24, 2020, but the summoned could not be honored due to the global shutdown enforced so as to curtail the spread of the coronavirus pandemic.

And with all airports limiting or completely halting flights, Komi's lawyers say honoring the summon was not possible and have rather picked on the government for failing to comply with the demand of the African Court on Human Rights which requested that Komi's travel documents be reinstated.

"Even if Komi Koutché can travel, he risks extrajudicial arrest once he steps into the country" his defense team is quoted to have said as they struggle to vindicate their client against the unjust political prosecution he faces.  Nevertheless   late at night from Friday 03 to Saturday 04 April 2020 Komi Koutché was finally tried in absentia by the judges of the Court for the Repression of Economic Offenses and Terrorism (Criet) and sentenced to   20 years' imprisonment and 100 million F CFA fines .

In the face of his judicial woes, and relentless persecution, Komi Koutché has continued to speak out on seminal issues concerning Benin. From castigating President Talon for confiscating power, to calling on the international to help rescue democracy in Benin, Komi Koutché seems to be sending the message that if judicial persecution was the way to silence him, the government of Benin got it wrong as he is still very much in the political game.

Tagged:
Copyright © 2020 US-Africa Cybersecurity Group. All rights reserved. Distributed by AllAfrica Global Media (allAfrica.com). To contact the copyright holder directly for corrections — or for permission to republish or make other authorized use of this material, click here.

Solutions to Africa's Digital Divide Must Include Satellites