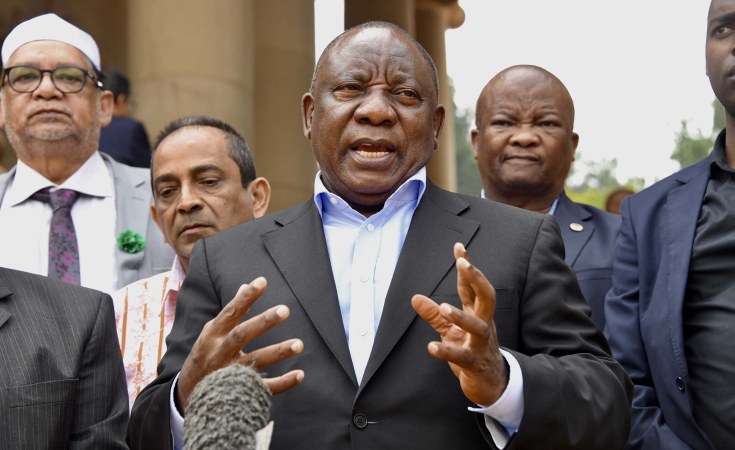 GCIS/Flickr
President Cyril Ramaphosa addresses the media after an earlier meeting on the novel coronavirus.
allAfrica.com

Cape Town — South Africa's President Cyril Ramaphosa has extended the country's coronavirus lockdown by another two weeks, effectively closing down free movement and much of the economy until the end of April. He also announced a temporary 33 percent pay cut for himself and members of his Cabinet and appealed to business executives to follow their example.

In a live broadcast to the nation, Ramaphosa said the two-week-long lockdown, initially due to end on April 16, was working.

He said this represented "real progress", although he acknowledged that "a better picture of the infection rate" would emerge only after the expansion of a drive to screen, test, trace and treat people.

"We are only at the beginning of a monumental struggle that demands our every resource and our every effort," he added. "Simply put, if we end the lockdown too soon or too abruptly, we risk a massive and uncontrollable resurgence of the disease."

But he said the government would take steps to enable what he called "a phased recovery" of the economy under which some sectors of the economy would be allowed to operate under strict conditions.

He called on businesses to continue paying their workers and their suppliers where possible.

"In support of this effort, we have decided that the President, Deputy President, ministers and deputy ministers will each take a one-third cut in their salaries for the next three months... We are calling on other public office bearers and executives of large companies to make a similar gesture and to further increase the reach of this national effort."

COVID-19 - Top Parties Differ On South African Lockdown Extension
Tagged:
Copyright © 2020 allAfrica.com. All rights reserved. Distributed by AllAfrica Global Media (allAfrica.com). To contact the copyright holder directly for corrections — or for permission to republish or make other authorized use of this material, click here.