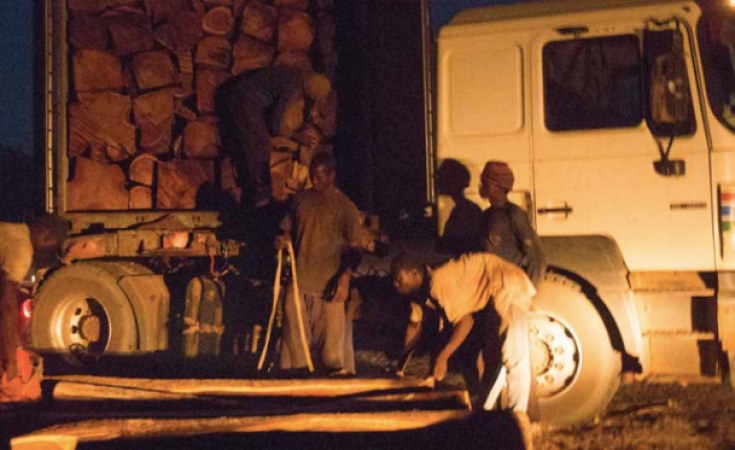 The Environmental Investigation Agency (EIA)'s new report, Cashing-In On Chaos , conclusively establishes links between timber trafficking controlled by Senegalese armed rebels; the decade-long smuggling of an estimated 1.6 million trees from Senegal to The Gambia; and the illegal re-export of the disappearing rosewood trees to China, in violation of the Convention on International Trade in Endangered Species of Wild Fauna and Flora (CITES). Some of EIA's findings are featured in the BBC's documentary The Trees That Bleed: How rosewood is smuggled from Senegal into Gambia , released in March 2020.

As The Gambia contends with the impact of COVID-19 on its people and economy, and the reported misuse of COVID-19 relief funds by some government officials, the destructive role of its underground timber sector is becoming increasingly evident. From 2010 to 2018, timber products represented on average over 30 percent of total national exports in value (in 2017, timber accounted approximately for half the value of Gambian annual exports). But there is an enormous gap with The Gambia reporting USD$444 million less in timber exports than their trading partners, principally China and Vietnam, declared as imports over these years (or approximately USD$50 million/year unaccounted for on average). This massive discrepancy has been primarily triggered by a handful of well-connected traders who maintain an unparalleled regional rosewood smuggling and laundering scheme.

Despite the fact that the West African rosewood tree (Pterocarpus erinaceus) was declared nearly extinct in The Gambia in 2012, the country has been one of the largest exporters of the species to China over the past ten years. According to traffickers who talked to EIA investigators, the vast majority of the timber exported from The Gambia to Asia has been smuggled from the neighboring country Senegal, in violation of multiple Senegalese laws.

Traffickers further explained to EIA investigators that the illegal trade has been largely controlled by the Movement of Democratic Forces of Casamance (Mouvement des forces démocratiques de Casamance –MFDC), an armed group that for decades has been at the heart of the longest violent uprising in West Africa. Lisa Handy, Director of Forest Campaigns at EIA said: "According to traffickers, who explained their modus operandi and their deal with the rebels in detail, timber smuggling operations are the main source of income for the insurgents. It is a fact that those involved in timber trafficking networks continue to jeopardize governance in the region."

Adama Barrow, the Gambian president who succeeded dictator Yahya Jammeh in 2017, early in his term announced policy reforms that would put an end to the regional smuggling operations. According to EIA's investigation, those measures have had little effect on the trafficking. The ban on exports has been undermined both by traffickers who have threatened Gambian officials unwilling to turn a blind eye to the illegal trade and by allegedly corrupt high-ranking officials, such as the Minister of Environment, Climate Change and Natural Resources (MECCNAR), Mr. Lamin Dibba. EIA did not receive a response to its inquiries from Minister Dibba.

On the rosewood issue, it appears that the new Gambian government has been unable to decisively break with the past. According to EIA's findings, the private company Jagne Narr Procurement & Agency Services ("Jagne Narr") was created as the exclusive interface between traders and the authorities, succeeding the Westwood Gambia Limited ("Westwood") company that operated under Jammeh. Westwood is expected to be investigated by the Swiss War Crime Unit after the non-governmental organization TRIAL International filed a criminal complaint against the company and one of its alleged owners, Swiss national Nicolae Bogdan Buzaianu, in June 2019. Westwood has denied wrongdoing and EIA did not receive a response to its inquiries from Jagne Narr's representative.

Since 2017, Pterocarpus erinaceus has been included on CITES Appendix II. The Convention presents a unique opportunity to stop the ongoing illegal trade between Senegal, The Gambia, and China. The Gambia has the power to stop this illegal timber trade almost instantly, by publicly establishing a zero export quota for the species and giving notice to all CITES Parties, including China, who would have the obligation under the Convention to stop any shipment reaching their shores. According to Kidan Araya, Africa Program Campaigner at EIA: "This could be a game-changer for The Gambia, as well as for the people and forests of Senegal, and it would pave the way for a coordinated West African approach to save one of the most trafficked wild species in the world, and to combat desertification and climate change."

It is imperative that international organizations, bilateral and multilateral efforts converge to accompany the Gambian government's shut down of one of the most active tropical timber trafficking hubs in the world that has undermined West African stability for almost a decade.

Tagged:
Copyright © 2020 Environmental Investigation Agency. All rights reserved. Distributed by AllAfrica Global Media (allAfrica.com). To contact the copyright holder directly for corrections — or for permission to republish or make other authorized use of this material, click here.