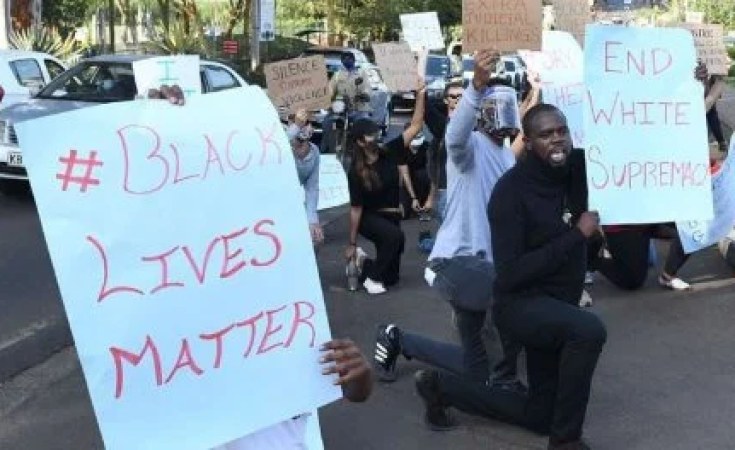 Kigali — George Floyd's case is just one out of millions that take place literally every single day in our unjust world.

The level of agony and pain of this assault are also not very different – the only difference in this case – thanks to the technology and social media – is that the story could not be hidden and left in the dark.

Police brutality and gross mistreatment across the justice system, discrimination across public services, unwelcoming gestures (micro aggressions) in the school hallways and so on, are just some of the daily phenomena that black people face all around the world. This case is representative of all of the black men and women who die at the hands of the police for doing mundane activities – walking dogs, jogging,  a broken tail light, and watching TV in one’s own home. Racism (and more specifically anti-Blackness) is at the helm of societies all around the world.

Racism is also not limited to countries in the Western world of U.S., Europe, Australia or Canada.  In these places systemic racism is practiced, protected, encouraged; it extends beyond to the multilateral and bilateral development and aid agencies, higher education institutions, and other international professional institutions where “merit” and “performance” are abstracted from systemic conditions of racism. Racism, as an instrument of white supremacy, has always eroded the intellectual integrities of institutions.

As men or women of color, especially black people, one has to prove his or herself exponentially more than a white counterpart who is privileged by his or her color in order to access and succeed the same opportunities. Alternatively, some choose to surrender to the white Godfather i.e. to be an “Uncle Tom” in exchange for protection and promotion as one who is complicit with the system. Should you opt for the former, you are always on your toes and rigorously striving to be ahead of the curve in order to simply survive. Even in that situation, if your success is found to set a different precedent, it becomes a threat to the system of white supremacy. (See Black Panthers, Black Wall Street, the assassination of Dr. Martin Luther King Jr. and various post-colonial African independence leaders).

Anti-Blackness often first becomes a reality for black children in schools. Black kids must perform exponentially harder to win not only the trust and confidence of racist teachers in the class, but also for their white classmates who are conditioned by their racist families. To this day capable, hardworking, and joyful black children have to consider dynamics of uncomfortable integration with white kids at school while also dealing with the usual academic and social strains of early school years. Condescending conversations around affirmative action, racialized athletics teams, and Eurocentric beauty standards are just a few of the other difficult experiences that children of color navigate through. Black kids must face an unimaginable amount of barriers in comparison to their non-black classmates and counterparts.

Around the world, we are all sick and tired of racial violence. Racism of any form should not be tolerated anymore. To use the words of Angela Davis, it is no longer enough to not be racist; it is now the time to be actively anti-racist. Murder, physical assault, or any type of harassment we go through every day are clearly vindictive and hurtful. Moreover, systemic poverty, disenfranchisement, underfunded public services, and mass incarceration are other forms of racial violence that have become normalized to the detriment of black people all around the world; this is black genocide. These forms of violence may not appear so starkly but are fundamental to the system that enables them. The world will know that we will never have peace when such levels of apparent or tactful injustices still exist.

As systematic as the subjugation may be, the remedies should also aim for structural changes. The anti-dote of the lethal poison should include naming and shaming, among other social pressure. The media plays a central role in this regard and is able to show leadership in defending the rights of minorities all around the world. Media and activists’ alignment should go beyond promoting political interest. Nepotism, conspiracy against black intellectuals, through information asymmetry, all other forms sabotages should by no means be tolerated in international institutions where racism is a common practice. Aid and grants should by no means be used as a weapon of threat or a condition for submissiveness on those who stand for their rights and for the rights of others. We call for rejection of such resources that have hidden motives of undermining our natural pride and dignities.

Racism is a present and imminent threat to humanity. Its consequence is a catastrophe like all other global threats, such as terrorism and pandemic. Thus, it requires a similar conviction and commitment across the globe. Racists should not have heaven anywhere to hide in.

Systemic racism is a sophisticated action, designed and devised by capable actors. It is all about conditioning one’s habits of thought, hence training or reforming of institutions as such is a futile exercise. All efforts in change should abe backed by legal action with strong enforcement. It is time for revolution.

Racists have no morals or mercy. They are as sick as bloodsuckers that are keen to do anything to protect their interests, especially if they feel your action will fundamentally shake their supremacy. They are capable of doing anything from defaming to false allegations to writing fake histories, which serve their purposes. It is very unfortunate, our peace and tranquility have always been at risk, just because some want to be more equal than the others. Our democracy, civilization, and all advancement that we brag on are futile and are proving to be incapable of securing our coexistence.

We are determined now more than ever not to be manipulated, divided, subdued and to not accept others' approval for our existence. Enough is enough. This has to be stopped.

It is time for Black people all over the world to unite in this cause.  Yes, Black lives matter! So do Black Pride and Dignity!

Previous Story
George Floyd - A Wound at the Heart of our Humanity, A New Symbol of the Fight against Racism and Police Violence
Next Story
Here We Are Again - Will Racist Violence in the United States Ever End?

George Floyd - A Wound at the Heart of our Humanity, A New Symbol of the Fight against Racism and Police Violence

Here We Are Again - Will Racist Violence in the United States Ever End?

Next Story
Tagged:
Copyright © 2020 Sustainable Development Goals Center for Africa. All rights reserved. Distributed by AllAfrica Global Media (allAfrica.com). To contact the copyright holder directly for corrections — or for permission to republish or make other authorized use of this material, click here.