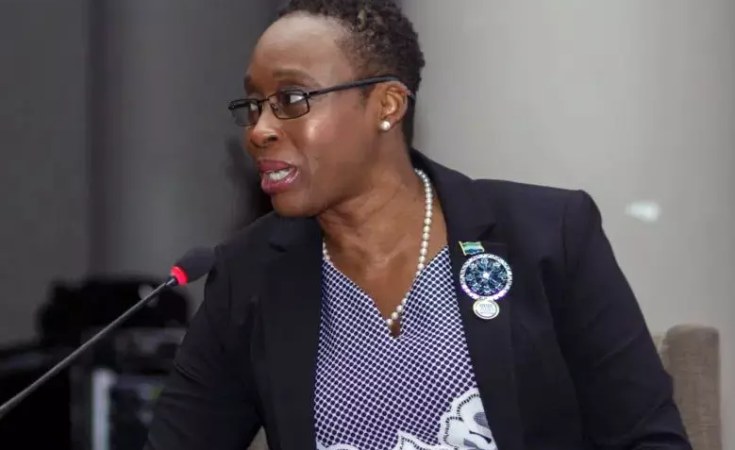 This article originally published in the UK-based Sierra Leone Telegraph is reprinted with permission. According to another story in the paper, the Magistrate conducting the June 12th hearing adjourned the case for a ruling on June 17th.

It was a sight to behold at the Freetown magistrate court No.1 when popular Sierra Leone female presidential aspirant and leading Journalist Dr. Sylvia Olayinka Blyden, lectured the country’s  Minister of Justice and Attorney-general Dr. Priscilla Schwartz, on key aspects of the Laws of Criminal Libel. Blyden, is representing herself against seven counts of criminal libel brought by the state through the consent of the Attorney General.  Four of the seven counts are about publications allegedly done by the female presidential aspirant against the current President, Julius Maada Bio.

It was on one of those four counts that Dr. Blyden lectured the country’s Attorney General on the Law. “Had it been any outright sacking of Priscilla Schwartz should have occurred before the end of today,” lawyers who witnessed the way Dr. Blyden phenomenally exposed the legal incompetence of Attorney General Priscilla. This is how Dr. Blyden presented today:

“My lady, Magistrate section 34 of the public Order Act of 1965 is what the Attorney – General says id her authority for giving consent for me to be prosecuted under section 33 of the said Act. In her own words, with her personal signature signed by herself, Dr. Priscilla Schwartz wrote that she is “satisfied that there is sufficient evidence to warrant a prosecution” of Sylvia Olayinka Blyden “under section 33.” Now, the same section 34 from which she takes her authority to prosecute me, also says “No prosecution for an offence under section 33, shall be begun except within 6 months after the offense is committed” but here is the Attorney General sending a state lawyer to help prosecute me under section 33 for an alleged crime committed 21 months ago in October 2018. Twenty one months ago my Lady. My Lady, the particulars of offence for count 7 of the information charge sheet defies logic, defies the established Law of the land and should be thrown out. The Attorney – General misadvised herself into consenting to the prosecution of a legally defective criminal charge that is tautology out.”

At this point, the Attorney – General’s officer said he will not argue that the charge is legally defective. He said that instead Dr. Blyden was “too late” to protest and should have protested on the first day. To this point, Dr. Blyden Quoted section 105 and 112 of the criminal procedure Act of Sierra Leone to buttress that she can point out a defective charge “at any stage of the court proceedings” but the magistrate refused to give Dr. Blyden a second bite argument. The magistrate said the issue brought to her attention against the Attorney general was so serious that she was going to stop the court case, with draw the file from the court and do research on the matter. She then adjourned the matter until another six days to June 17th 2020 for a ruling.

Sylvia Olayinka Blyden / Facebook
Sylvia Blyden, a former minister and to ex-President Ernest Bai Koroma, who was detained by police on May 1, 2020.

The police has also confirmed under cross – examination that they drove the inhabitants of Dr. Blyden’s residence away from her compound and took possession in full of her entire compound from the day they kidnapped her on May 1st 2020 until May 15th 2020. The police identified the formal handing – over Note which they did of Dr. Blyden’s house on 15th may 2020. So it is no w in evidence that since May 1st 2020 on to May 15th 2020, the only people who had been in 24hours full possession of Dr. Blyden’s residence was the Sierra Leone police. According to the police witness, they took over the compound for 15days in order to “protect and safeguard the contents of Dr. Blyden’s house after we took her away from the house on May 1st 2020.”

“The implications of this open confession of the Sierra Leone Police are enormous” said Lawyer Kamara, a barrister in Sierra Leone.

In an open letter to the government and people of Sierra Leone, Dr. Blyden's mother, Mrs. Sylvia Editha Jolliminah Blyden - a dual Sierra Leone and British Citizen living in the United Kingdom, appealed for her daughter's release, according to Awareness Times, a newspaper published by Dr. Blyden:

"My daughter has been held in rather deplorable conditions which are highly detrimental to her health. We are extremely worried as a family, especially with the COVID-19 pandemic which is spreading throughout the world for her well-being. Furthermore, no protective measures from COVID-19 were taken during the interrogations and statement-taking that lasted for several hours.  Dr Sylvia Blyden is in precarious health and without the support, time or strength for a proper defence of her Human Rights. Consistent with its commitment to International Human Rights instruments and Constitution of Sierra Leone, the Sierra Leone Government must heed the urgent advice of Medical Doctors from Sierra Leone and abroad, and allow my daughter Dr Blyden to access appropriately specialised and expert hospital setting outside prison, before it is too late. If the Sierra Leone Government fails to heed doctors’ advice by urgently granting bail to Dr Blyden on Medical Grounds, I will hold the Government fully responsible, if anything happens to my beloved daughter’."