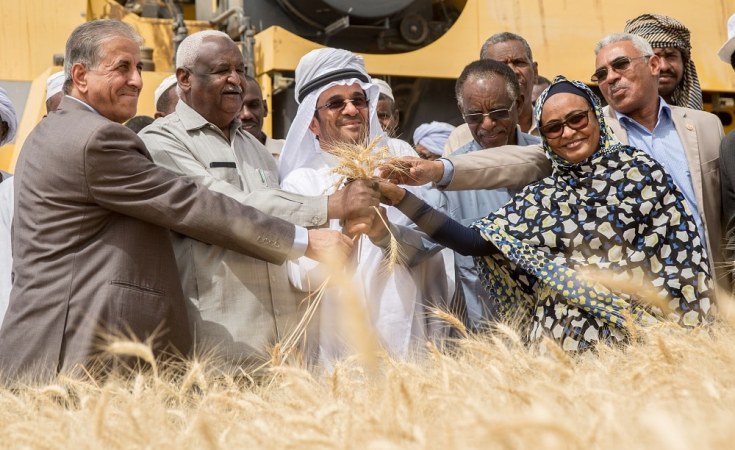 Sudanese wheat farmers are in a joyous mood.

They are celebrating the success of new heat-resistant wheat varieties which have transformed their country’s food landscape.

Thanks to the scaling up of proven technologies by the Wheat Compact of Technologies for African Agriculture Transformation (TAAT), the farmers can now boast of new cultivars such as Imam, Zakia and Bohain.

According to the Sudanese Minister of Agriculture and Forestry, Nahar Osman Nahar, the high productivity and wheat area expansion witnessed during this season has led to a record high production expectation of around 0.85 million tons of wheat, covering up to 45% of the national demand.

Wheat is one of the most important agricultural commodities in Sudan for food security in terms of quantity and calories consumed.

It is grown on approximately 201,000 ha under irrigation with an average productivity of 2.5 t/ha. The annual wheat production stands at 513,000 MT, representing about 22 % of the total national requirement of 2 million MT.

The ever-widening gap between local production and consumption led to a huge shortfall that is primarily met by imports, which drains the Sudanese economy of over 500 million dollars per year in foreign exchange.

In 2018, Farmers and other players in Sudanese agricultural sector were hit by a severe bread shortage and sharp price increases last year.

The citizens blamed the bread shortage on a lack of foreign currency, which deepened a crisis that was triggered after the government halted wheat import subsidies.

Technologies to the rescue

Recent experiences to promote these heat tolerant wheat varieties in Sudan through the AfDB-funded SARD-SC (wheat) project revealed that technology-adopting-wheat farmers at project intervention sites increased their wheat productivity to 4-7 t/ha, while farmers with their traditional varieties rarely exceed 2.5 t/ha.

Despite this potential, Dr Solomon Assefa, the TAAT wheat compact leader said the lack of improved wheat seed in sufficient quantity and quality at affordable price was widely regarded as a driving factor significantly contributing to the poor adoption and weak performance of wheat in Sudan.

These and many more prompted the scaling up of heat-tolerant wheat technologies to farmers in Sudan.

“The technologies comprised many new wheat varieties with heat and drought tolerance, and stem rust resistance. These traits allow for expansion of wheat production in Africa, including the Sahel during its cooler “winters”, Dr Assefa said.

“It is fast-tracking this next generation variety release through national programs. It offers expertise in land preparation including raised beds, furrow and deficit irrigation, and sprinkler systems. It promotes low-cost mechanized planting within conservation agriculture,” he added.

From technologies to high yields

Following reports that the TAAT’s wheat programme was already yielding significant results in the El-Gezira region of Sudan, the government in collaboration with TAAT, organised a travelling workshop from the 25 to 29 March 2019.

The workshops featured visits to women groups who received training on wheat value chain during the SARD-SC programme and are now earning a living through the several income yielding opportunities that wheat provides; to farmers harvesting wheat planted and watered in line with proven technologies.

The workshops also had in attendance, a broad range of stakeholders in the wheat sector including policy makers, private sector, credit institutions, input providers, processors, civil society, youth and women’s associations and thousands of farmers showed up to witness the Sudanese success story.

IP sites are selected by the TAAT wheat team for scaling up and widely promoting the impact of proven wheat technologies to farmers and stakeholders along the value chain.

At the event, Abdelaziz Mahmood and Idriss Al-Hassan, both technology-adopting farmers expressed their happiness with the impressive performance of heat tolerant wheat varieties.

“We are expecting to realize yields of 4-6 t/ha this season, as compared to 2t/ha we are used to before joining the TAAT programme,” Al-Hassan said.

At Wadelneim village, a group of innovative farmers who adopted the heat tolerant varieties (Zakia and Imam) shared their views with field day participants that they are expecting to achieve yields of 6-7 t/ha from their farms. They further indicated that the hands-on training at farmers field school and proper application of the recommended packages were the key to their success.

Between 2012 and 2016, Sudan only produced 24% of the country’s national wheat demand, leaving it heavily reliant on imports of over 1.5 million tons of wheat each year.

Heat stress in sub-Saharan Africa is a major constraint to wheat production. In places like Sudan temperatures often exceed 38°C. Climate change is expected to worsen the situation.

In response to the food crunch, the African Development Bank decided to intervene to boost one of the most vital food sources in Sudan.

TAAT as a delivery vehicle

Technologies for African Agricultural Transformation (TAAT) therefore became a vehicle of delivery for the bank.

Within the framework of the TAAT programme, the wheat compact established close collaboration with all concerned partners along the wheat value chain in Sudan to scale up proven wheat technologies with the objective of achieving a widespread and transformative impact.

In concrete terms, the compact went to work on enhancing productivity, farmers’ income, job creation, and value addition; all leading towards attaining wheat self-sufficiency before or by 2025.

During the 2018-19 season, a number of activities were implemented as the compact established 6 Innovation Platform (IP) sites, including the production and delivery of high quality seeds, scaling up and adoption of proven wheat technologies and capacity strengthening of different stakeholders along the wheat value chain.

Funded by the bank, TAAT’s main objective is to improve the business of agriculture across Africa by raising agricultural productivity, mitigating risks and promoting diversification and processing in 18 agricultural value chains within eight Priority Intervention Areas (PIA).

The programme increases agricultural productivity through the deployment of proven and high-performance agricultural technologies at scale along selected value chains.

TAAT operates as a network of interacting “Compacts” with nine devoted to specific commodity value chains, and six others serving as “Enablers” that provide needed specialist services.

According to Hon. Nahar, the Sudanese Agric minister, the growing partnership between the private and public sectors engaged in seed production and other technologies could result in a record amount of certified seed, enough to cultivate around 420,000 hectares of wheat next season.