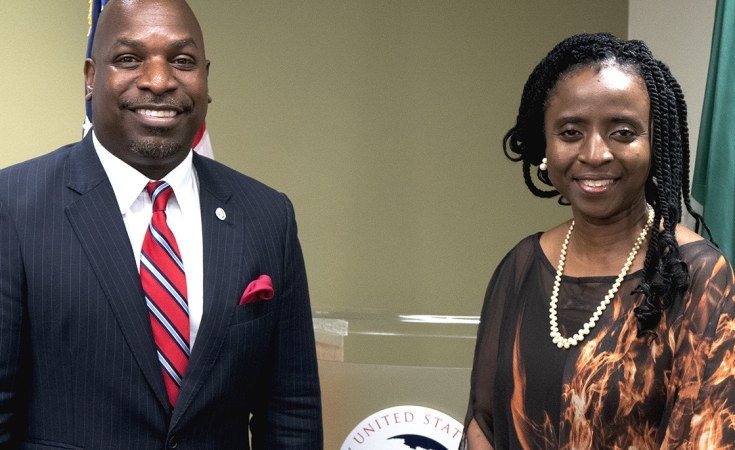 Lagos — Last week in Lagos, Nigeria's Lagos State Employment Trust Fund (LSETF) and the United States African Development Foundation (USADF) held a grant signing ceremony as part of their $10 million, five-year partnership to address youth unemployment in Nigeria. To kickoff this partnership, LSETF and USADF will invest in eleven vocational training and employment centres (VTCs) to train unemployed youth in Lagos State and empower them to find jobs and improve their livelihoods.

Speaking at the grant-signing ceremony where the VTCs that will implement the youth-led enterprise initiative were announced, Yetunde Arobieke, the state's Commissioner for Wealth Creation and Employment, said the partnership with USADF is aimed at building the capacity of 15,000 young people in Lagos State over the next five years.

"Today, both parties are here to validate the Memorandum of Understanding signed in May 2019 and to take deliberate steps to fulfil our promise to our young and productive population with the award of grants to eleven vocational training centres following the completion of the project development phase," said Arobieke.

"The implementation of relevant industry training will be our next focus within this programme" she said. "I'm glad about the robustness of this programme, as industries and sectors to be covered under this initiative include but are not limited to technology, creative arts, agriculture value chain, transport and logistics, renewable energy, and construction.

It is our hope that beyond the total number of youth who will benefit from this programme, many others will be inspired to embrace self-development based on the positive impact of this initiative on their peers."

The Lagos State government, represented by the LSETF, in May 2019 signed a five-year, U.S. $10 million commitment with the USADF to increase youth employment in Nigeria through financial investments, job training and placements, and entrepreneurship opportunities. Each party is expected to contribute $1 million annually over the period.

The VTCs are expected to receive between $10,000 and $100,000 each through the LSETF and USADF partnership.

"The expectation from the Lagos State government is very high, so I implore all the VTCs that we are passing the responsibility for successful implementation of agreed curricula that will equip our youth with relevant skills, enabling them to hold their own against their peers anywhere in the world," Mrs. Arobieke continued. "To the beneficiaries of this training, I urge you to take full advantage of this opportunity to advance your career, realise your dreams, and become beacons of hope for our friends and loved ones."

USADF is an independent U.S. government agency established by the U.S. Congress to invest in African grassroots organizations, entrepreneurs, and small- and medium-sized enterprises. The Foundation provides seed capital and local project management assistance to early-stage enterprises and entrepreneurs addressing local challenges, such as food insecurity, insufficient energy access, and unemployment, particularly among women and youth.

USADF President and CEO C.D. Glin said the partnership with the Lagos State government is part of the Foundation's model of using local partners to provide solutions to local problems.

"Our model is very much African-driven, African-led," said Mr. Glin. He said the partnership with Lagos government "was an easy opportunity for us to build on the LSETF momentum." He urged the VTCs to be "guiding forces and mentors" to the young people they will serve.

"So many times we think about the U.S. government working in Africa and bringing in our own solutions to African challenges, but here in Lagos State, we found a programme already running, already going, and we were able to match that momentum," he said.

LSETF board chair Ifueko Omoigui-Okauru, a fiscal reform advocate who was the first women to head Nigeria's national Inland Revenue Service, as well as the first woman to chair the Joint Tax Board of Nigeria, said she believed the partnership with USADF would make significant contributions to solving the youth "employability challenge".

Glin agreed with the emphasis on financial responsibility to achieve results. "It's the U.S. taxpayer's dollars," he said. "USADF is a U.S. government agency, but we invest in Africans and their ideas, their innovations and solutions, to the challenges that face the continent." "When we are successful here, this is going to be transformational, not only for Lagos State but for the other 35 states in Nigeria - and then the 50-plus countries on the continent - because we are all facing the same challenges around this need for employment, job creation and entrepreneurship."

Ben Ezeamalu is an Assistant Managing Editor and the Head of Lagos Operations/Metro Editor at PREMIUM TIMES. A graduate of Microbiology from the University of Jos, Ben won the 2015 Africa Fact-Check Awards and was a runner-up in the 2014 CNN/Multichoice African Journalists of the Year. Twitter: @callmebenfigo.

The U.S. African Development Foundation (USADF) is an independent U.S. government agency established by Congress to invest in African grassroots organizations, entrepreneurs and small- and medium-sized enterprises. USADF's investments promote local economic development by increasing incomes, revenues and jobs and creating pathways to prosperity for marginalized populations and underserved communities. Utilizing a community-led development approach, USADF provides seed capital and local project management assistance, improving lives and impacting livelihoods while addressing some of Africa's biggest challenges around food insecurity, insufficient energy access, and unemployment, particularly among women and youth. Over the last five years, throughout Africa, with an emphasis on the Horn, Sahel and Great Lakes regions, USADF has invested more than $114 million dollars directly into over 1,000 African-owned and operated entities and impacted over four million lives.