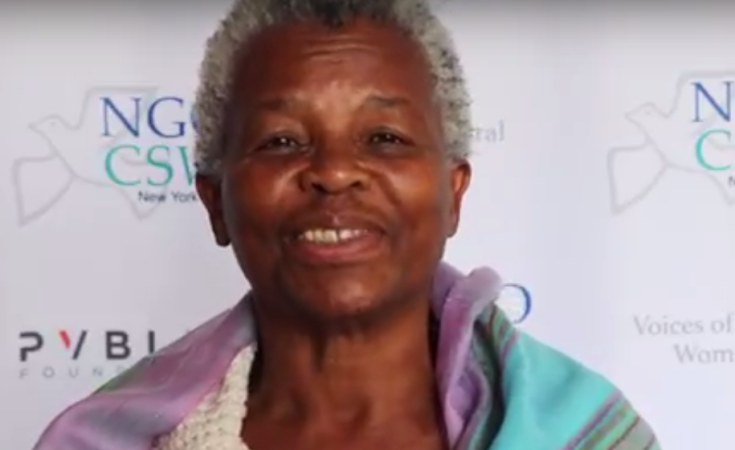 Cape Town — South African women's land rights activist Sizani Ngubane has died, according to the Rural Women's Movement (RWM) - an organisation of which she was the director and founder.

There were several attempts on Ngubane's life during her 40 years of activism. At the time of her death she and her organisation , along with rights groups, were challenging the Ingonyama Trust in Pietermaritzburg High Court, Thomson Reuters reported in November2020.

Their work so far includes finding housing for evicted women and children, helping grow food on communal land for the hungry and sick, and campaigning for better legal protection of women's land rights.

She was recently one of three finalists for the 2020 Martin Ennals Award for Human Rights Defenders, which is referred to as the Nobel Prize for human rights.

" We are saddened to share that our Founder and Director, uGogo Sizani Ngubane has passed on. She transformed countless lives. A lifelong freedom fighter, first against the brutal apartheid regime, uGogo, alongside other rural women, would later charge forward towards the promises of democracy.

"Tirelessly working for women's land rights and equality, uGogo also laboured against gender-based violence and other challenges facing rural women.
Originating in a non-partisan, women-led peace building movement, we have become a leader-full movement inspiring countless across KZN, South Africa, and the globe.
"She was really beyond a special person. Fearless. Creative. Kind. Determined like no other. An unwavering belief in others and an endless reservoir of empathy and ubuntu.

"Reflecting on the life of uGogo Sizani we are reminded of Cornel West's proclamation that, '...justice is what love looks like in public'. For decades, spanning minority-rule to the present, uGogo Sizani was a freedom fighter for love both in public and in private.

"She will be missed deeply by all. Hamba kahle, Gogo."

This tribute was followed by one from Nomboniso Gasa, in which she wrote: " Mam' Sizani Ngubane has died. She was a gentle giant. My heart's breaking.
Last time I spoke to her, she was fatigued from a govt hell-bent on destructive Bills,TCB & TKLB.
Can't imagine Rural Women's movement - which she found in 1990 - without her energy, courage and vision."

The Council for the Advancement of the South African Constitution (Casac) added their condolences by calling today "very sad among many sad days".

" Our condolences to the family of Gogo Sizani Ngubane & members @RWMKZNSA - we will continue the fight for land tenure security in your memory @LRC_SouthAfrica ".

The Ennals Award ceremony was to be streamed live from Geneva on February 19, 2020, and the Martin Ennals Foundation said about Ngubane after it decided to recognise her work with a nomination: " In South Africa, women face discrimination, the worst expression of which is widespread gender violence. In rural communities, they frequently have their land expropriated and are deprived of access to education and justice. Sizani Ngubane founded an organisation of more than 50,000 women from rural areas in her country and has fought successfully for over 40 years for the recognition of their rights."

On hearing of her death, the award organisers tweeted: " A lifetime #HumanRights giant is gone. #SouthAfrica #WomenRights champion and #MartinEnnals finalist #SizaniNgubane has passed away. Generous, determined, loving, resilient, she was the very essence of a #HRD . She will be dearly missed. #WomensRights #LandRights #KZN @RWMKZNSA".