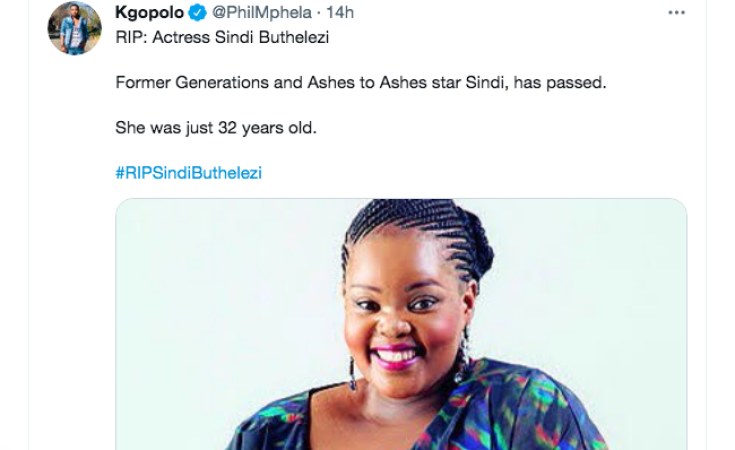 Cape Town — The entertainment industry has lost yet another talent as actress Sindi Buthelezi has died.

Buthelezi was popular for her role as Zinhle Mathe - Chopper's girlfriend, played by Mandla Gaduka on the Generation soapie.

Details surrounding the cause of her death are still unknown.

Buthelezi was born and raised in the East Rand in a small town called Ratanda where she pursued her love for acting at a local community hall.

She played the role of Ntombi in the 12th season of SABC 1's HIV/Aids drama Soul City in 2014. She also briefly portrayed a news reporter in Isibaya.  In 2016, she appeared as Patience Khumalo in the E.TV serial Ashes to Ashes as a guest performer.

Celebs, fans have taken to social media to share their heartfelt condolences.

@Silvah_ So so so sad to learn of the passing of Former Generations actress Sindi Buthelezi who was known on screen to be Zinhle, dating Choppa (Mandla) in the original Generations! Ayi, siyaphela isizwe. Just 32 years old… #RIPSindiButhelezi

@Ncuthukazi_11  - May your bubbly Soul Rest In Peace #RIPSindiButhelezi wow 2021

@8mbalee8  I will always love you. Thank you for everything. Rest in peace sthandwa sam, until we meet again my love. #RIPSindiButhelezi