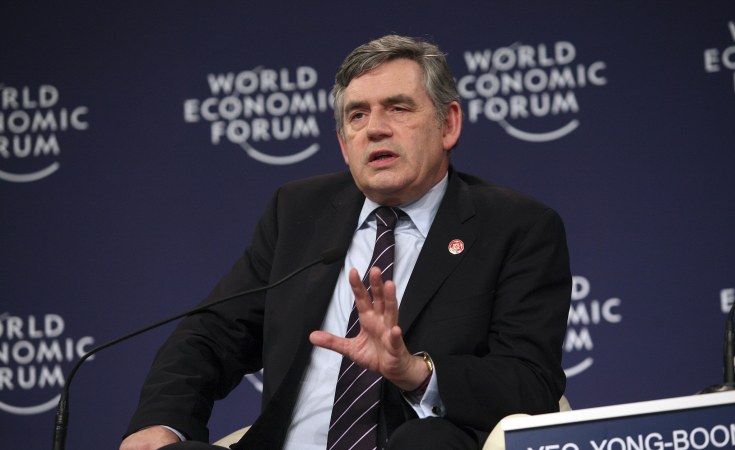 WEF
Ahead of a Special Session of the World Health Assembly focused on the proposal for an international agreement on pandemic preparedness and response, Gordon Brown, the WHO Ambassador for Global Health Financing and the former Prime Minister of the United Kingdom, argues the upcoming assembly summit offers a "unique opportunity to address these gaps by serving as a launchpad for a process that will urgently develop a legally binding international agreement under the auspices of the WHO Constitution."
allAfrica.com
opinion By Gordon Brown

Five million lives worldwide have already been lost to Covid, and the WHO/ACT-A grimly predict another 5 million more lives will be lost in months to come. Alarmingly also, Covid cases will swell from the 260 million confirmed so far to 460 million by the end of 2022.

In the words of WHO Director General, Dr Tedros Ghebreyesus, a new agreement should be underpinned by a high-level commitment to health for all grounded in equity and solidarity between nations. Not only should all people have fair access to what they need for their health, irrespective of their wealth or their income, but the international community should ensure the equitable use and distribution of available medical resources. For that to happen, we need a fully functioning global surveillance system, the fast tracking and sharing of support in emergencies and predictable finance.

Nothing illustrates the need for this more clearly than our collective failure, as an international community, to meet our promise to secure the equitable distribution of vaccines. For whilst, thanks to brilliant science and a strong manufacturing performance, we will have produced 12 billion vaccines by Christmas - enough to vaccinate every adult in the world -  95% of adults still remain unprotected in low-income countries. This is perhaps the greatest public policy failure of our times.

The WHO's internationally agreed adult vaccination target for every country - 40% by December - is set to be missed by 82 countries. On current trends, it will take until Easter at least to get close to the 40%, and even then, dozens of countries may miss out. In fact, since June's G7 meeting, where leaders pledged the whole world would be vaccinated by 2022, the gap between the vaccine haves and the vaccine have-nots has widened rather than diminished. In high-income countries, vaccination rates have risen from 40% in June to 60-70% now, but they have moved at a glacial pace in low-income countries - from 1% to less than 5%. Indeed, six adults are receiving their booster shots in middle- and high-income countries for every one adult now being inoculated each day in a low-income country and 90% of African health workers remain unprotected.

Although important regional initiatives like the Africa Union's vaccine purchasing facility AVAT, have taken steps to address the inequity gap by purchasing 400 million single-shot vaccines from Johnson & Johnson and another 110 million doses from Moderna - 50 million coming between December and March - it is still not enough to meet the needs of a continent of 1.3 billion people.

This inequality is simply explained: 89% of all vaccines have been bought by the G20 - the world's richest countries,-  and today they retain control of 71% of future deliveries.  Promises from the Global North to gift vaccines to the Global South have fallen short: only 22% of the donations promised by America have been sent. Europe, the UK and Canada have performed considerably worse and have despatched only 15%, 10% and 5% respectively. Covax, the global vaccine distribution agency, which had hoped to send out 2 billion vaccines by December, now expects to deliver just two-thirds of that number. Such is the scale of the stockpiling of vaccines in the richest countries that health data research group, Airfinity, estimate that by the close of 2021, 100 million unused doses in the G20 stockpile will pass their 'use by' dates and be wasted.

World Health Organization
The 74th World Health Assembly was held virtually from May 24 to 31 2021.

For G20 countries, to have and to hoard life-saving vaccines and deny them to the poorest countries, is morally indefensible. To allow tens of millions of doses to go to waste is an act of medical and social vandalism that may never be forgotten or forgiven. An urgent, ongoing, month-by-month delivery plan and airlifting of vaccines, coordinated by the G20 countries, is now needed to put the unused capacity to use where vaccines are most needed.

But the vaccine inequities show why more fundamental changes are needed in the international architecture of health decision making. Of course, few international organisations have been given the freedom and independence to make binding decisions which national governments are obliged to follow.  The discretion available to the Appeal Court of the World Trade Organisation and to the International Criminal Court, whose decisions are final, are areas where an international organization can overrule nation states and because of that they are under assault from a coalition of anti-internationalists.

While there is a global health treaty focused on reducing the demand and supply of tobacco, and a 2011 agreement to ensure the WHO can commandeer supplies of flu vaccine when needed, the binding worldwide agreement that has been called for to enable world health authorities to do more to prevent, detect, prepare for and control a pandemic still eludes us.

The special World Health Assembly summit offers us a unique opportunity to address these gaps by serving as a launchpad for a process that will urgently develop a legally binding international agreement under the auspices of the WHO Constitution.  They can build on important reports – the G20 report of Larry Summers, Tharman Shanmugaratnam, Ngozi Okonjo-Iweala, the Mario Monti report to the European region of the WHO and, the recommendations of the WHO review led by former Liberian President, Ellen Johnson Sirleaf and former New Zealand PM, Helen Clark.

First, our global health leaders must have more authority to develop and upgrade health surveillance Second, we need to build on the pioneering work of ACT-A and Covax (the global vaccine allocation agency), to ensure equitable manufacturing and distribution of PPE, tests, treatments and vaccines so that all countries can detect, respond , treat and protect against current and future pandemics.

Third we need a global pandemic preparedness board. But all this will work only if we devise a sustainable financing mechanism to address the glaring global inequalities in health provisions across the world. Too often, in times of global crises - even those where we face life and death decisions - we are reduced to passing round the begging bowl or convening ‘pledging’ conferences in a way that is more reminiscent of organising a whip-round at a charity fundraiser.

Ideally, pandemic preparedness needs to be financed by a burden-sharing formula where the costs are shared between the countries with the greatest capacity to pay. Even now, just less than 20% of the WHO's budget is covered in this way. The eradication of smallpox in the 1960s and 1970s made history not least because the final push to eliminate the disease was initiated by a burden-sharing agreement under which the richest countries shared the costs.

Considering the trillions of dollars of trade lost due to Covid - an estimated $9 trillion, the $10 billion a year budget for pandemic prevention and preparedness, deemed necessary by the G20's high-level independent panel,  would offer one of the greatest returns on investment in history.  But we must act now - and this week's World Health Assembly is the place to start - if we are to be prepared for all future eventualities.

Gordon Brown is a WHO Ambassador for Global Health Financing and is former Prime Minister of the United Kingdom.

WHO's Special Envoys Call for Support for Pandemic Preparedness Treaty