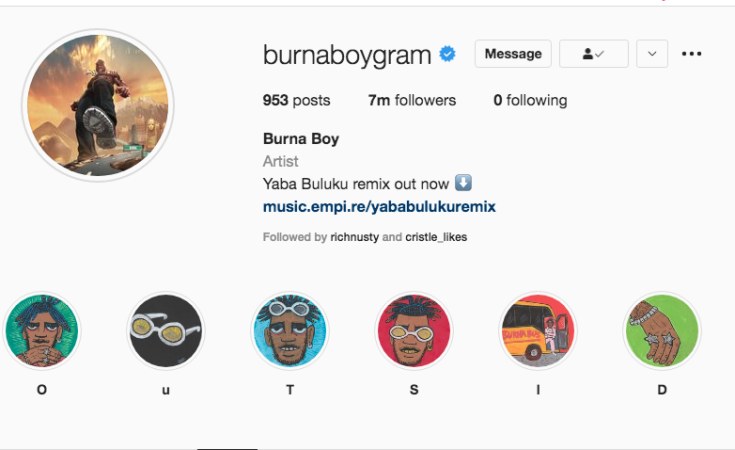 Though Burna was already an international Rockstar, his performance during the sold-out Madison Square Garden concert elevated him to music immortality, as the name of King Kong can now be spoken in the same breath as all the great performers before him.

Just six days after it was held at the Legendary Madison Square Garden, New York, Burna Boy's "One Night in Space" concert hit a million viewers on YouTube (Thousand of viewers around the world streamed the show live too).

In case there are people still dithering whether Burna Boy is the real King Kong of afro-fusion (some prefer Afrobeat or Afropop), that record-making feat was more than enough to thaw their indecisiveness.

Apart from silencing naysayers, in "One Night in Space", Burna finally claimed a permanent position at the table of musical greats across all times. I have read several reviews of his awe-inspiring performance in perhaps the world's most prestigious arena. One thing many of them have in common is the cursory analysis or complete neglect of how his performance on the night was a tribute to some of these greats - dead or alive - whom the Port Harcourt-born bard now dines.

"If I have seen further, it is by standing upon the shoulders of giants", wrote English physicist and astronomer, one of the brightest minds that ever walked the earth, Isaac Newton, in a letter to fellow scientist Robert Hooke in February 1675.

For the African Giant, as he christened himself via the title of his fourth studio album, to "stand twice as tall" as his contemporaries, he stood upon the shoulders of giants before him, and "One Night in Space" was a testament of how they helped mould his craft into the jewel on this play on the night.

The show kicked off with an introductory speech from one of hip hop's greats, Busta Rhymes. The Flipmode Squad frontman spoke about the cultural significance of the concert and how the fact that Burna Boy was headlining a concert in the legendary arena was the start of a new era in music.

The concert proper kicked off after a short saxophone routine by one of the more visible members of Damini's (Burna Boy was born Damini Ogulu) band, the Outsiders, Bishop, who put up a fleeting but strong guitar-aided saxophone routine. Aside from getting the raving audience ready for what would be one of the greatest performances they had ever watched, it was also a worthy precursor to the electrifying performance by one of Africa's most recognisable voices; Youssou N'dour.

The Senegalese griot put up an exhilarating rendition of his album-topping collaboration with Burna Boy, "Level up". The iconic voice held the mostly young audience at the arena and millions of others streaming the show at home spellbound.

Music aficionados have often come hard on the live performances of Nigerian popular singers, which they often describe as tawdry and poorly put-together. It is common to hear showgoers complain, regrettably, about how they were mostly noisy, mediocre, and DJ-garnished recitals of their songs. It is in the light of this that one cannot gush too much about the significance of the Outsiders to Burna Boy's live performances, especially on the night. In fact, Damini has told whoever cared to listen that his band was the fuel that propels his stagecraft.

"At this point, I just want to live and die on stage with my band, the Outsiders. I've achieved all the dreams I ever personally had. Money gives me no satisfaction, nothing really does, except being on stage with my God sent band," the singer tweeted barely a month before the Madison Square Garden concert.

The Outsiders' effortless blending of Burna Boy's ad-lib reminds one of the smooth spreading of margarine on the steaming softness of a loaf of oven-fresh Agege bread. Music critics do not appreciate the individual brilliance of members of a band. True, the skill of every member of a band complements the skill of others. Without collaboration, a band ceases to exist. But it is increasingly difficult to overlook the genius of three members of the Outsiders - Folahan Olaniyan, the lead saxophonist, Christina Matovu, the lead vocalist, and Emmanuel Laj, the drummer, if one is a loyal follower of Burna Boy's live performances. The evening was another proof that the trio were the primary stars in Burna's constellation.

The prominence of the saxophone in Burna's live performances holds a deeper meaning to his music than just something to complement other instruments. The horn is at the core of his music. Of course, Burna's music and stage performances copy copiously from the legendary Fela, the creator of Afrobeat (this comes as no surprise as his grandfather, Benson Idonije, was Fela's manager and his mum was a dancer in Fela's band at a time). The sax was the eminent instrument in Fela's Afrobeat.

When interviewed on The Bridge podcast, which is co-host by perhaps the greatest emcee in hip hop, Nas, a few days after the Madison Square Garden concert, Burna further revealed how the instrument was the foundation of his sound:

"Before he even became Fela's manager, he was a radio DJ in Lagos. I wasn't even born this time. He has all these records. Every vinyl that ever came out of any Nigerian was in his possession and he has been passing them down to me and stuff. I used to think my voice was shit. He is the one that used to tell me that no, your voice can be compared to a saxophone. If the saxophone doesn't have the right melody, it sounds shit. So I started making melodies from the saxophone and everything from the saxophone."

Perhaps the only low point of the evening was Burna Boy's dowdy first outfit on the evening - a black spar dotted jacket on a nondescript white shirt. If the aim was wearing such a sleepy attire was to veil the unforgettable performance he was about to put up, it worked perfectly well.

After the legendary N'Dour bowed off the stage, Burna Boy stepped on with some of the mellow tunes on his Twice as Tall album, starting off with "Wetin Dey Sup" and "Pull Up" from his African Giant album. This afforded the bard to feel the stage and fraternise with the audience.

That mingling with the audience was not without its gains. By the time Burna Boy started singing "Rock Your Body", his sensual joints off the Outside album, and "Onyeka (Baby)" off the Twice as Tall album, ladies in the audience were already taking off their bras and throwing them on stage. Burna, the lady's man, picked up a few of those bras (this sent the ladies in the audience raving even louder) and held them for some time during the concert.

Aware that the show was being watched by millions of his fans across the world, Burna Boy, the salesman, did not allow the opportunity to pass by without milking it to promote his music. He paused from his on-stage shenanigans with the ladies in the audience to announce the release date of his next album, Love Damini, which he said will be released on his birthday on 2 July 2022. He sang a joint from that album while directing his fans to scan a QR Code to pre-order the album. Smart.

About midway into the two-hour-long show, Burna, the sales agent, gave way to Burna, the social justice crusader. It was at this point in the show that he imbibed the spirit of Fela which songs like "Collateral Damage", Another Story - which was introduced by footage culled from Jide Olanrewaju's documentary "Real Story of Nigeria".The chorus of "Another Story" also sampled Stereoman's "Dey pain Me Gaga", which is also a song about social justice and equity.

Burma then spent a moment ad-libbing about recent social issues and corruption in Nigeria such as the stealing of Covid-19 palliatives by Nigerian political elites.

Fifty-five minutes into the show, Burna stepped aside to allow his dancers, who had been hiding behind his silhouette up to that moment, to enjoy a glimmer of the limelight. A group of masked drummers and a trio of theatrical dancers in red followed them and together they performed a military-style interlude, which I call the Burna Parade.

But it was not altogether altruistic as it was a chance for the showman to change from his drab black jacket to a flowing red and white jacket on top of a colourful long-sleeve t-shirt. From that point, Burna switched to his hit songs and party jams like Ye, Dangote, Killing Dem and his recent collaborations with other African musicians like "Sungba", with Asake "Second Sermon" with Ghanaian musicians Black Sherif and Kweku Frimpong, and "Jerusalema" remix with South Africans, Master KG and Nomcebo Zikode.

Though Burna was already an international Rockstar, his performance during the sold-out Madison Square Garden concert elevated him to music immortality, as the name of King Kong can now be spoken in the same breath as all the great performers before him.