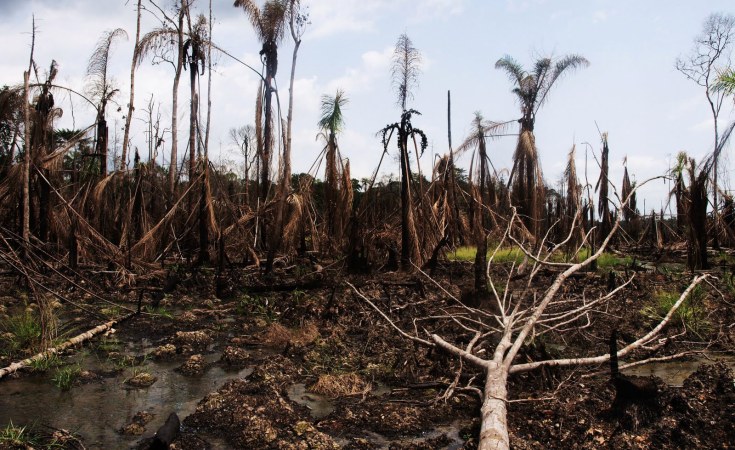 Cape Town — Climate activists have demanded answers from Standard Bank for its involvement and continued support for oil and gas projects on the African continent, even as the worst effects of the climate crisis are being seen and felt.

Activist shareholders and NGOs attended the company's annual general meeting to question executives about the East African Crude Oil Pipeline (EACOP), it's involvement in gas extraction in Mozambique and support for future oil and gas projects in the region. This comes amid increasing pressure on the financiers of fossil fuel projects such as banks, insurers and other financial players who are key to future development projects.

The heated crude oil pipeline is planned to run from Hoima in Uganda to the port of Tanga in Tanzania, covering an area of 1,443km. It will run near Africa's largest freshwater reserve - Lake Victoria - posing a huge threat to local livelihoods and biodiversity in the region. According to 350.org, more than 100,000 people are being forced off their land and are facing expropriation.

While oil producers often point to jobs and income for host countries, this seldom translates to benefits for citizens.

The Bureau of Investigative Journalism has reported that the deal between the Ugandan government, TotalEnergies and the China National Offshore Oil Corporation would see most of the benefits go to the oil majors. The deal "much of which remains secret" ...  "would override some national laws and ... "grants the companies a 10-year exemption from income tax, and circumvents Ugandan laws that would ensure jobs and contracts go to local people and companies".

But the cost of fossil fuel extraction extends far beyond mining and transportation to the heavy and ongoing cost often borne by the poorest communities of polluted water, air and land that can no longer be used for sustainable livelihoods.

Nigeria has long faced the challenges of being resource-rich, with its abundant oil and gas reserves, but has also struggled with the suffering caused by pollution from oil leaks and spills, as well as gas flaring. Communities have for decades struggled for justice from oil companies for their polluted lands and loss of income and culture.

Nigerian environmental rights lawyer Chima Williams, who for 20 years held transnational companies accountable for the oil pollution in these communities,  was recently awarded the Goldman Environmental Prize 2022 for his work.

Gas developments in Mozambique also came up for discussion during Standard Bank's AGM. Ilham Rawoot of Justiça Ambiental (JA!)/Friends of the Earth Mozambique says "although many other financiers are doing a full reassessment of their involvement in these LNG projects, Standard Bank continues to fund them. Despite the claims that gas production would improve Mozambican government revenues, support wider economic development, and address energy needs, Mozambicans are poorer than they were a decade ago and the country will be left with stranded assets and no resources to support an alternative development pathway".

Standard Bank says it has not yet decided whether to fund the pipeline. The company also says it supports the Paris Climate Agreement and a just transition, and argues that developed countries should make the biggest cuts to emissions as they are the "largest historic emitters and bear the most responsibility." The bank says fossil fuels are needed to "support access to reliable energy that supports economic growth and poverty alleviation".

Activists say "this position is not in line with climate science, nor with the reality of fossil fuel extraction in Africa. The financial benefits of this extraction are overwhelmingly exported to developed nations, while Africans bear the brunt of the devastating social and environmental impacts".

More than 20 banks, including most of TotalEnergies' largest bankers, have said that they will not join the project loan.

A court case by a Peruvian farmer against a German energy giant asking for compensation for future climate impacts due the company's historic emissions could pave the way for greater accountability by corporate polluters.

But how do we transition from fossil fuels?

African countries have profound challenges with access to energy for its citizens. According to a report by the Economic Commission for Africa (UNECA), about 600 million people do not have access to electricity and nearly 900 million people have no access to clean cooking fuel, while power access rates in 24 countries are below 50%.

While renewable energy is not without its own challenges in terms of accessibility, and the upfront costs needed for technology it is by far the cheapest and safest option for long-term energy sustainability without completely compromising the conditions on earth needed for human survival.

A young Sierra Leonean entrepreneur has created an energy company that is providing free electricity to rural communities who previously had no access to safe, clean power. Jeremiah Thoronka and Optim Energy have harnessed piezoelectricity to create a sustainable source of electricity. This form of electricity makes use of kinetic or movement energy when pressure is applied to certain materials. So for example, when mechanical pressure is applied to a crystal, which is a piezoelectric material, it generates a current.

Thoronka's design uses heat, movement and pressure. It absorbs the vibrations from pedestrians and traffic to generate an electric current and create clean and affordable power. This invention won Thoronka the Varkey Foundation's Chegg Global Student Prize 2021 in November.

Biodiversity, or the diversity of plants, animals and microbial life is essential to human survival and health, food production and good livelihoods. As more species disappear at an increasingly rapid rate we face the possibility of being unable to produce enough food to feed the world as insects such as bees, butterflies and wasps are facing a health and food crisis of their own.

Biodiversity also presents an immense opportunity for indigenous and rural communities to be the innovators and creators of new and sustainable products made from plant and animal sources.

A report by the Montpellier Panel says that "bio-based innovations can offer technological solutions to many of the economic, social, and environmental challenges facing Africa. The use of renewable biological resources, primarily from the agricultural sector, provides a platform from which to accelerate a global transition toward greater sustainability. A vibrant bioeconomy can increase agricultural productivity and support the expansion of agro-industries, both of which are vital for sustainable economic growth, employment generation, and enhancing economic competitiveness".

"... Africa's agricultural processing waste is being used in novel ways. These by-products - typically the leftover pith, husks, stems, leaves, and so on from commodity crops like sugarcane, coffee, and cotton, can be turned productive, including as bio-energy sources to replace fossil fuel and even for packaging. This reduces overall carbon emissions as food waste is a major greenhouse gas emitter," Dr. Ousmane Badiane and Prof. Joachim von Braun write in an article related to the report.

While these type of energy intervention are usually hyperlocal and on a small scale it also provides an opportunity for community-led and owned energy solutions that bring skills and jobs to areas often overlooked for development, as seen in the case of Optim Energy.