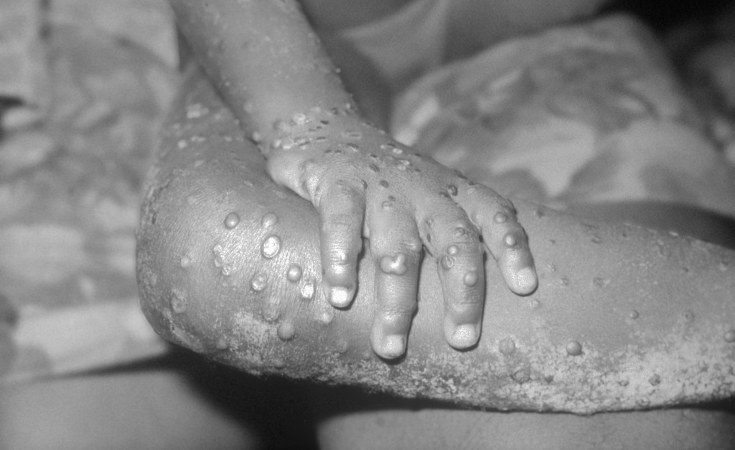 Centers for Disease Control and Prevention
Close-up of monkeypox lesions on the arm and leg of a female child. Human infection with monkeypox-like virus in 4 year-old female in Bondua, Grand Gedeh County, Liberia. This infection was caused by a pox virus of the vaccinia, variola, monkeypox type.
Premium Times (Abuja)
By Mariam Ileyemi

Mr Adetifa said Monkeypox is not a plot to cause lockdowns like COVID-19 and that there is no evidence of the release of the virus from a laboratory.

As Monkeypox continues to spread globally, the Nigeria Centre for Disease Control (NCDC ) has decried what it described as widespread misinformation about the infection, especially in Nigeria.

The Director-General of the NCDC, Ifedayo Adetifa, said this on Tuesday at a virtual media dialogue on the infection, noting that more than 3,000 laboratory-confirmed cases and one death have been recorded globally as of June 22, 2022.

Mr Adetifa, however, admitted that there is an uptick in Monkeypox cases in Nigeria, and concluded that if not contained, it could exceed the peak number of cases seen in 2017 when the infection re-emerged.

The NCDC boss added that contrary to the belief in some quarters, "monkeypox is not a plot to cause lockdowns like COVID-19 and there is no evidence of the release of the virus from a laboratory."

He said, though rare, Monkeypox is not a novel disease.

"In Nigeria, there has been no observed change in transmissibility of the virus nor changes in its clinical manifestation documented (including symptoms, profile, and virulence) nor is there evidence of sexual transmission," he said.

The latest Monkeypox update by the World Health Organisation (WHO) shows that from January to June 22, 2022, 50 countries across five regions have reported a cumulative total of 3,413 confirmed cases with over 90 per cent recorded in non-endemic countries.

According to the data, the WHO European Region topped the infection with 2,933 cases, representing 86 per cent of the total cases, followed by the Region of the Americas with 381, amounting to 11 per cent.

The African Region came third on the log with 73 cases, representing 2 per cent of the global cases reported from six countries, with Nigeria topping the list.

Nigeria is followed by the Democratic Republic of the Congo, the Central African Republic, Ghana, Cameroon, and Congo.

Apart from misinformation, Mr Adetifa explained that the discrimination and stigmatisation that come with the Monkeypox infection need urgent intervention.

He said: "Prevailing media perception and misinformation on monkeypox has fuelled false narratives about the virus, the potential risk of discrimination and stigmatisation from this requires urgent social and behaviour change intervention.

"Since its sudden resurgence in 2017, a multi-agency Technical Working Group (TWG) coordinated at the NCDC has led Nigeria's efforts to improve the detection, prevention, and control of monkeypox

"Importantly, we have gained a better understanding of the epidemiology of the virus to inform preparedness and response in-country," he said.

He also added that genomic sequencing is ongoing at NCDC's National Reference Laboratory to identify possible mutations and the epidemiology of the virus.

Speaking further, he noted that NCDC is supporting the global effort to respond to the disease as well as pushing for the renaming and re-classification of the virus to a "non-discriminatory and non-stigmatising nomenclature".

"Monkeypox is a priority despite being neglected for years, especially during outbreaks as we have had in Nigeria and neighbouring countries such as DRC a few years back

"While it is unfortunate that it takes such a global spread for the needed attention to be given, here in Nigeria, it has remained a priority for us," he said.

In his remarks, the WHO Country Representative, Walter Mulombo, urged journalists to address misconceptions about Monkeypox disease which has continued to fuel false narratives about Nigeria globally.

"What is important is to avert any potential inequitable access to vaccines experienced by African countries including Nigeria in the early stages of a pandemic," he said.

Mr Mulombo added that the rumours and misinformation would cause more harm and loss of lives than the monkeypox disease itself.

According to Mrs Amao, from January 1 to June 26 2022, there have been 204 suspected cases in total, 62 confirmed cases from 19 states and one death in a 40-year-old man with co-morbidity that was receiving immunosuppressive drugs.

Describing the suspected cases, she explained that it comes with an acute illness with fever >38.30C, intense headache, lymphadenopathy, back pain, myalgia, and intense asthenia.

One of three days later, it follows with a progressively developing rash often beginning on the face (most dense) and then spreading elsewhere on the body, including the soles of feet and palms of the hand.

For the probable case, she said a case that meets the clinical case definition, is not laboratory-confirmed but has an epidemiological link to a confirmed case, while the confirmed case is a clinically compatible case that is laboratory confirmed.

She further explained that Monkeypox can be contacted directly or indirectly with a confirmed case through skin lesions, oral secretions, urine, faeces, vomitus, blood, sexual contact and sharing a common space.

In the latest situation report, spanning June 20 to June 26, 2022, the NCDC reported 42 suspected cases of Monkeypox, with 21 newly confirmed cases from 13 states.

Speaking on the NCDC mandate, Mr Adetifa said: "As the national public health institute, the Nigeria Centre for Disease Control and Prevention is mandated to prevent, detect and respond to events of public health importance.

"As we continue to ensure that all infectious diseases receive adequate attention using a One-Health approach, we remain grateful to our partners including the WHO-AIRA (Africa Infodemic Response Alliance) and Breakthrough Action Nigeria for the support they provide to institutionalise a system for effective management of infodemics associated with these outbreaks in the country.

"This birthed the National Infodemic Management Team (NIMT) domicile in NCDC that conducts active social and community listening to identify information gaps relating to the monkeypox outbreak, with critical support from partners."