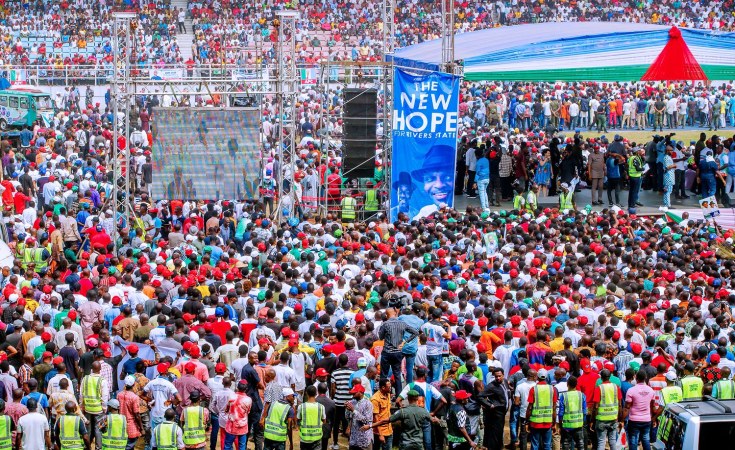 BashirAhmaad/Twitter
The APC political party at a rally in Port Harcourt.
Vanguard (Lagos)
By Miftaudeen Raji

For the umpteenth time, the Ogun State governorship candidate of the Allied Peoples Movement, APM, in the 2019 general election, Adekunle Akinlade, has dumped the ruling All Progressives Congress, APC in the State.

In separate letters addressed to the State Chairman and the Agosasa Ward Chairman of the APC, Akinlade cited failure of the National Leadership of the Party to intervene in the internal crisis rocking the Ogun State Chapter of the Party as the rationale behind his resignation from the party.

Akinlade, a former member of the House of Representatives, said his conscience could not allow him to continue to participate in a process he described as devoid of justice.

Vanguard recalls that Akinlade, who is the preferred candidate of the former Governor Ibikunle Amosun of the State also dumped the APC to contest the election on the platform of the Allied People's Movement, APM in 2019, a development that followed the declaration of Governor Dapo Abiodun as the candidate of the APC in Ogun State.

After the 2019 governorship election, Akinlade emerged the first runner up behind Abiodun, who won the election with about 19, 000 votes.

Akinlade had since returned to the APC after losing the election upon the intervention and reconciliation moves by the national leadership of the ruling party.

The former lawmaker also participated in the primaries of the APC ahead of the 2023 general election, but polled zero votes.

The letter addressed to the State Chairman reads, "This is to formally notify you of the resignation of my membership from the All Progressives Congress, APC.

"In fulfillment of Article 9, Sub-section 9.5 (i)(ii) of the APC Constitution that deals with cessation of membership, I hereby state that I do not have any item or property of the Party in my possession.

"This decision became necessary because of the failure of the National Leadership of the Party to intervene fairly in the internal crisis rocking the Ogun State APC.

"As a principled and forthright individual, I cannot in good conscience continue to participate in a process that is devoid of justice."

Akinlade, in a separate letter to the dated 28th June, 2022 addressed to his ward Chairman in Agosasa area of Ipokia Local Government, said, "In 2018, I was given the opportunity to contest the gubernatorial primary on the platform of our great party and won on the 2nd of October, 2018, but the result was manipulated by the Comrade Admas Oshiomole-led NWC.

"I left the Party temporarily to contest the gubernatorial election and returned in December 2019. I have since remained loyal to the Party both here at home and National level

"It is unfortunate that despite our loyalty and efforts to prevail on the party for justice and fairness, the leadership of the party at the National HQ has continued to ignore our pleas and complaints that bother on the lopsided State Congresses, Local Government Elections, Party Executive Elections, the Delegate List, and recent Party primaries.

"Then, the refusal of the Ogun State Party Leadership to uphold the sharing formula as agreed by the various stakeholders and parties.

"It is on this end that I have decided to resign my membership in the All Progressives Congress," the letter said.

Meanwhile, there are speculations that Akinlade and other foot-soldiers of the former Governor might be on their way to the opposition Peoples Democratic Party, PDP.