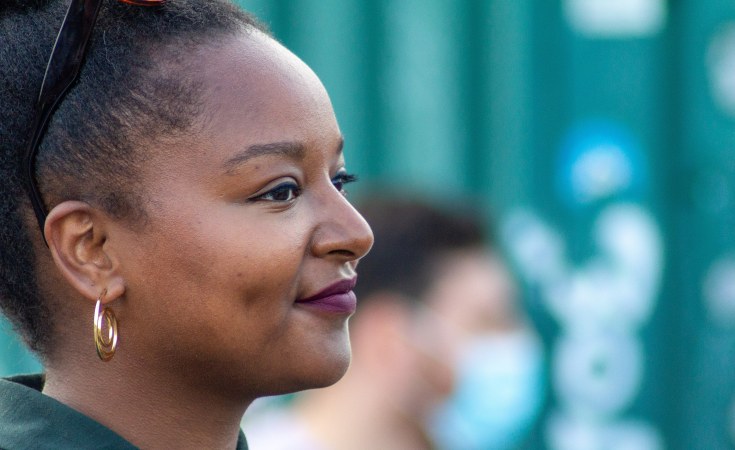 Michael Brandtner / Wikimedia Commons (CC BY-SA 4.0,)
Aminata Toure is the first Black member of a state government in Germany. She is the daughter of refugees from Mali.
Deutsche Welle (Bonn)
By Cristina Krippahl

Aminata Toure became the first Black member of a state government when she was sworn in as the social affairs, youth, family, seniors, integration and equality minister in Germany's northernmost state of Schleswig-Holstein in June.

A Green and the daughter of refugees from Mali, Toure told German media that she sees her role as "special" given the numerous messages she has received from people who say her appointment has meant "a lot to them."

The 29-year-old Toure said she would also take the opportunity to fight for equality and against right-wing extremism.

These issues have been her hallmark since she was first voted into Schleswig-Holstein's state parliament in 2017.

It's not the first time that Toure has achieved a political first. In 2019, she was elected as the state parliament's deputy speaker, becoming the first Black person and the youngest politician to hold such a position in any of Germany's 16 states.

Toure was born in 1992 in Neumünster, a medium-sized industrial town in Germany's far north, where her parents had settled after fleeing from Mali.

She spent the first five years of her life in a refugee shelter, eventually gaining German citizenship when she was 12.

Toure uses the term Afro-German to refer to herself; it defines her as a person with roots in Africa but at home in Germany, she told DW earlier this year.

"I have always had both worlds in me," she said. "At some point, I didn't want to have to choose between countries anymore. So I use a term coined by a feminist movement of Black women here in Germany: Afro-German."

Her family's fears of being deported shaped her decision to start being politically active, and she joined the Greens in 2012 -- the same year she started studying political science and French at university in Germany.

Toure has long pushed for the better and swifter integration of refugees in Germany. This stance has earned her enemies and resulted in anonymous threats.

But the young star of German politics said she wouldn't allow that to intimidate her.

Her will to succeed in politics was strengthened by her parents, who never tired of telling her that, as a member of a minority group, she would have to give 200% when others gave 100%, she told German RND media ahead of her inauguration as minister.

"But I would like to see a society in which there is no need to give twice as much just because you're different in some way," she said.

"Everyone should have the same opportunities and possibilities."

Her experiences have fortified her belief that German politics needs more diversity.

Policies, she said, should also be made by people who understand the perspective of those who are still poorly represented in society.

And, although "biography is no substitute for politics," what a person goes through "has an influence on how political decisions are made," she told DW.

The need for more diversity in politics

As someone who has experienced racism, but also had strong support from people who believe in the importance of her work, Toure wants to set an example for others from minority ethnic backgrounds.

As she wrote in her book, "We Can Be More: The Power of Diversity," Germans should be proud of all who have contributed to turn the country into a democracy and those who are still fighting to strengthen the rule of law.

Hugo Flotat-Talon contributed to this article.