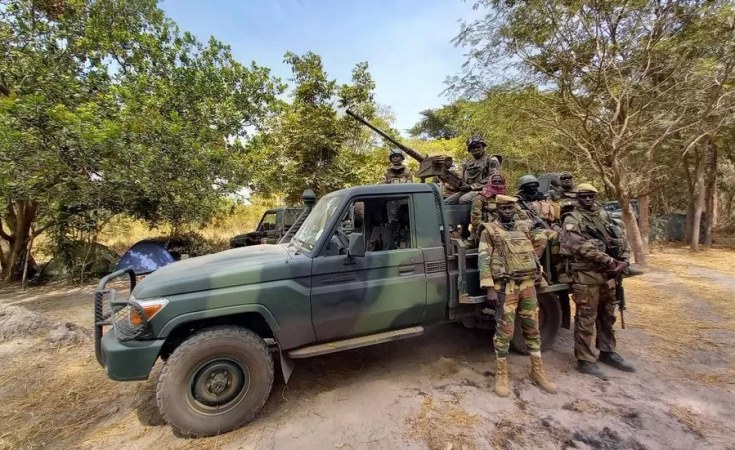 The recent Senegalese military raid in the southern Senegal of Casamance has mentally traumatised a 10-year-old boy residing in a Gambian community in Foni bordering Casamance.

This is according to findings revealed by Mbassi Sanneh, a staff member working for the National Disaster Management Agency (NDMA).

Sanneh's documents the negative impact of the crisis in the affected communities in Foni and how a decision can influence positive actions and interventions, which was shared with this medium on Monday, July 4, 2022.

Madam Sanneh also disclosed that a 70-year-old woman always hide under a bed when she hears gunshots or sees a uniform man passing by.

Below are the findings of Mbassi Sanneh produced in verbatim:

The Gambia is geographically surrounded by Senegal; on three sides except for the West. The Foni region of the Gambia borders the Southern Casamance region of Senegal, where a separatist Movement of Democratic Forces of Casamance (MFDC) is claiming independence from mainland Senegal. This has caused a political impasse between the Senegal government and MDFC for over 40 years.

There have been incidences of clashes of forces on both sides and insurgences. This border is so porous and uncontrollable that rebels move in and out of the Gambia, causing security threats, especially during regional clashes.

Recently there have been incidences between the Senegalese Army, and the Separatist Movement, resulting in causalities on both sides.

On March 13th, 2022, the Senegalese Army launched a major raiding on the rebels, and the people on the border were forced to flee to the neighbourhoods in Foni and Gambians living near the Casamance border.

People were internally displaced. Consequently, the government of The Gambia, through the Office of the Vice President, instructed the National Disaster Management Agency (NDMA) with development and humanitarian partners to conduct a rapid and detailed assessment to establish the immediate needs of the displaced persons.

When it happens, it exceeds the capacity of the affected people, place, or area to cope.

Therefore, the impact of crisis prevails over underlying risk factors. When disaster strikes, the consequences are immeasurable.

In the Foni incident, women, girls, children, and the elderly are most affected disproportionately by menfolk. These groups are confronted; with the effects of human-induced disasters and exposed to hazards and risks.

The report established that the crisis disproportionately affects female-headed households more than males. The impact of the crisis and the frequent trend has forced these people to accept the new normal in their respective host communities.

Doubtlessly, disaster instigates traumatic stress of constraining power in lives, deprivation, displacement, grief, and at times sceptical about the future possibility of recovery. The assessment manifested the case in terms of vulnerability, needs, and response to the host and the internally displaced families.

In dialogue with the host and internally displaced families, as the situation unfolds, the crisis affects the health, agriculture, education, and social and economic conditions of women, girls, children, and the elderly. Some mothers are left without the infant welfare cards for their children.

There are inadequate drug supply and nurses at health centers and unaffordability of transport fares accessing health facilities.

Insufficient water supply and access is a challenge like-wise latrines. The water points are not enough in communities due to a surge in water pressure and unaffordability payment to E-water service to fetch water. Males and females in schools have shared latrines while the provision of WASH is deteriorating because of overcrowding.

The lack of proper or no latrine in some compounds inclines to open defecation. Quote "I am afraid of using the latrine at night because of the risk of sexual violence or other risk factors"; these are some emerging threats to vulnerable groups.

Worth noting that the crisis doesn't stop monthly period. As part of social cohesion to break the menstrual stigma, the adolescent girls opted to share sanitary products with their internally displaced counterparts.

These promulgated to experiencing income loss to afford the pad, which can augment the risk of infection and reproductive health complications. There are overcrowding in homes and a lack of privacy using latrines and bathrooms. These are problems managing their periods hygienically.

Some internally displaced sleep on the floors and can develop pneumonia, especially in children. Vector-borne diseases like malaria can disrupt some communities because rains are approaching with increased growth of grasses and stagnant water for mosquitos to breed.

There are children, the elderly, pregnant and lactating mothers with a tendency for malnutrition. A woman delivered just two days after arrival in one of the communities. Food availability and access are constraints, and food intake is reduced to two meals instead of three as a coping strategy to economise food stock.

Naturally, when disaster stroke, relief is significant but there is a need for psychosocial support. There are common panics in host communities and the internally displaced especially when their living context is not the same quotes from the discussions with some women. A ten-year boy is mentally traumatised by the gunshots and explosives. A 70-year-old woman is always hiding under the bed when she hears gunshots or sees a uniform man passing by.

A number of them were inflicted with injuries, broken hands, and a leg on their way to a haven. The "change of environment contributed to children having fever and vomiting" was mentioned by a mother. They are left with trauma and post-traumatic anxiety syndrome.

Physical and environmental impact damages to property, gardens, cashew farms, water tanks, and roofs. They are economically destabilised and bankrupt. They were engaged in petty trading, gardening, and farming, and some were employed by the baby corn project GICAF.

They cannot meet their needs anymore. Horticultural activities are the source of income, and everything is at standstill and alarming for food insecurity. The hosts have depleted their food, material, and financial resources for social cohesion.

There is an immense social distraction of internally displaced women, girls, children, and elderly from the Gambian borders to the communities of Foni pursuing sanctuary. Rains are approaching, and accommodation is a concern. Some of them live in mud shelters which can be washed by a heavy downpour or strong windstorms exacerbating the situation for families. Secondly, the risk they are challenged with is military attack, domestic and wild animals from nearby bush lamented.

Misfortune happens! The conflict seized the rights to education of the school-going children. Schools have been closed since the 13th March 2022, attack. Parents are worried about the children and early marriage if the girls are not going to school, and they can be victimised by the new environment inviting unwanted pregnancy for fulfilling socio-economic needs for financial gain as a coping strategy. And also can be a trailblazer to sexually transmitted infections such as HIV/AIDS and STI because of overwhelming responsibilities.

The Government of the Gambia provided five million dalasis ($96,154) through the National Disaster Management Agency for response to the victims and the host families. The UN Country Team, committee-based organisations, NGOs, and individuals gave technical, financial, food, and non-food items assistance.

Appreciation to the government, stakeholders, and the entire team of data collectors for unflinching support and for risking their lives facilitating the registration of the displaced families for rapid intervention.

Reminiscences of the conflicts between the Senegalese Army and the MDFC group left women, girls, children, and the elderly challenged with the threatening responsibility of protecting their families together in displacement, not providing for the health, food, education, shelter, and clothing.

These groups are predominantly recipients of the consequences of the crisis. The situation is worsening to a great extent, and farmlands are damaged as their source of income for the maintenance of families.

Women, men, youth, and elderly expressed emotion in resolving peace in the Southern part of Senegal, Casamance, and its people through the Government of Senegal, the Gambia and the MDFC group.

This conflict is terrifying people's insecurity and stability at the border belts because the crisis caused immediate impacts at the beginning in the Foni's and later spilled over to indirect secondary implications to Kombo East and North as the problem evolved into new phases.

Everyone is terrified by the conflict exacerbating the education, psychosocial, and well-being of the inhabitant's at the border and to the general public. There is a loss of livelihoods, property, lands, and other valuable assets which would not be recovered.

It is long overdue to enhance the security resilience at the border belts, eradicating future crises by investing in good governance, disaster risk reduction, and response. Hopes and aspirations are dashed because of the situation and they need urgent peace and conciliation.

Eternal prayer for the Gambia our homeland for urgent peace and tranquillity rekindle to the Gambian borders!!

Disclaimer: This article aims to share some of the findings on the negative impact of the crisis in the affected communities and how a decision can influence words into actions.

Tagged:
Copyright © 2022 FOROYAA Newspaper. All rights reserved. Distributed by AllAfrica Global Media (allAfrica.com). To contact the copyright holder directly for corrections — or for permission to republish or make other authorized use of this material, click here.