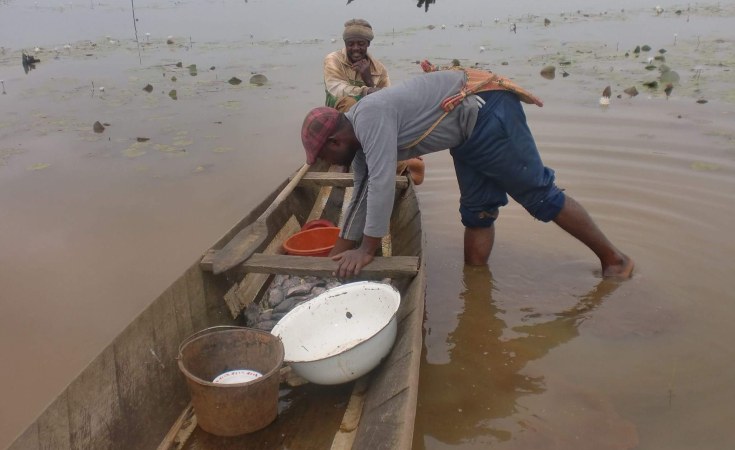 Entrepreneurs in Cameroon's anglophone region have found a way to provide local, fresh fish to customers, despite a lack of a river and an ongoing armed rebellion. Their efforts could be a game changer for Cameroon's fisheries sector, which faces numerous challenges.

Bamenda, the capital of the north-western anglophone region of Cameroon, is landlocked, and for six years the region has been roiled by an armed rebellion of militias seeking to separate the Anglophone areas from the French-dominated central government.

Lockdowns and militia action has limited access to commodities coming from elsewhere, including fish.

So Amah Wilson looked for another solution: ponds.

"In Bamenda, we don't have a river that can provide fish for the entire population, so we had to develop a means of feeding our local population with fish, which is healthier than meat," says Wilson, an environmentalist and founder of Kissisky Biomass, Energy and Engineering Services.

"We grow black flies and use their larvae to feed the fish, that we feed with rice from the Ndop plain and with vegetables."

Electrical engineer Ayere Levis raises catfish in three fish ponds in the village of Widikum - which he did out of necessity.

"What actually motivated me to go into fisheries was because there wasn't a constant supply of fresh fish in Wikdikum, due to the instability of the country," he says.

"We could have lockdowns for about one month, and with that we could not have fresh fish."

While these entrepreneurs are opening their fish ponds, most of the population still relies on fish that comes from Lake Bambalang, to the east of Bamenda.

"People like Bambalang fish because it is quite nutritive and it is natural. This is not fish from ponds," says Ernest Mukrongho, who sells smoked tilapia from Bambalang and has been in the fish business for over ten years.

He says over-fishing and a dam have reduced fish populations, which limits supplies and sends prices soaring.

The Anglophone crisis has had an impact as well.

"Bambalang has so many islands, and because of this crisis, children run and hide there, so fishing has increased as there is no school," explains Nuibougho Isidore Tih, who sells fresh Tilapia and catfish from Bambalang in Bamenda in the evenings.

Fish ponds as a solution

Cameroon's fishing sector faces numerous challenges, including a lack of data on fish stocks, an influx of industrial fishers from other countries, subsidy-driven fishing and illegal, unreported and unregulated fishing.

The state has recognised that local ponds can help. In Bamenda, the government has opened its own pond to produce fingerlings - baby fish - to be distributed to farmers.

The Nkwen/Bambui Fish pond is the only functioning fingerling station near Bamenda, as others in Bamessing and Komomi have been shut down because of the violence.

Customers and chefs are being convinced by local fish that does not need to be trucked far, which preserves its freshness.

"I find it very nutritive, because they use natural feed to feed the fish, not like the sea food and when you eat, the flesh is not too soft, like the other species of fish," says grill chef Stella Selamo.

With some home-grown ingenuity even amidst all the insecurity and challenges, entrepreneurs are succeeding in providing quality fish for local customers.

This story was originally heard on the Africa Calling podcast.