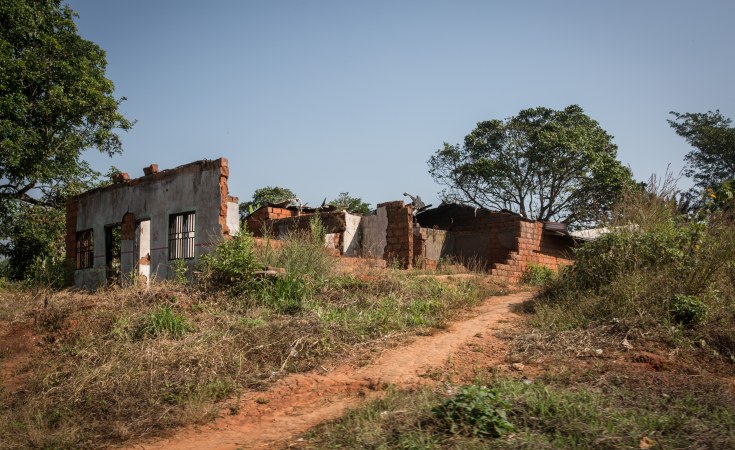 Ingebjørg Kårstad/Norwegian Refugee Council
In November 2019, the road leading from the small airport outside Bamenda and into the city had been the site of intense fighting and the area was mostly abandoned. Burned and destroyed houses and cars were everywhere to be seen in Mankon village.
Voice of America (Washington, DC)
By Moki Edwin Kindzeka

Yaounde, Cameroon — Cameroon is asking for international help to fund the rebuilding of western regions that have been destroyed in five years of conflict with separatists. A plan to construct roads, schools, hospitals, markets and homes was launched in 2020 but has been hindered by ongoing fighting and budget woes.

The reconstruction plan has raised only $18.2 million of the $150 million needed to rebuild the English-speaking Northwest and Southwest regions, the government said Thursday. Officials in the mainly French-speaking country also say intense fighting between separatists and troops is making it very difficult to rebuild infrastructure in towns and villages where relative peace has returned.

Paul Tasong, coordinator of the Presidential Plan for the Reconstruction and Development of Cameroon's Northwest and Southwest Regions, noted what countries like Japan have allocated in terms of Cameroonian francs.

"Today only Japan supports us with 1.5 billion ($2.3 million) and we are currently actively working with them for an additional 900 million ($1.3 million) from Japan," he said. "We don't want to underestimate the very important and significant contribution from the national private sector where we recorded 1.2 billion ($1.8 million). What are the other partners doing? We are still waiting and we continue to wait with hope."

Tasong said the government of Cameroon contributed 70 percent of the money put forth for the reconstruction plan.

When the government launched the plan in 2020, it promised to reconstruct 12,000 private homes and public buildings that were destroyed by fighters. So far, only 40 schools and 20 hospitals have been rebuilt.

According to Tasong, hundreds of farmers and fishers also received funds to restart activities in towns and villages where there is relative calm. The government said at least 15 markets have been reconstructed.

Elsie Ambe, a businessperson in Cameroon, attended a meeting Wednesday in Yaounde as a potential donor. She said donors are reluctant to contribute because separatists continue to torch government property and houses of people suspected of sympathizing with the central government in Yaounde.

"Those who destroyed the infrastructure we already had are still there and if their minds are not rebuilt, they will likely (continue to) destroy," she said. "So I think that moral rearmament and harmonious living together should be considered as a priority. From there, you (government) can think of any other need. Reconstructing the mind is a fundamental base of reconstruction."

Separatists on social media platforms, including WhatsApp and Facebook, say they intend to disrupt the plan, developed by President Paul Biya in 2020. This month, the government said fighters either chased or abducted road workers from several towns and villages in the Southwest region.

The government said it must continue with the plan to revive the economies of the troubled regions and bring back people who have fled the crisis. It also said a majority of the 700,000 children whose schools were burned down five years ago will be able to return to the classroom to resume their education.

Cameroon's government said separatists will be defeated if civilians report fighters who are hiding and destroying public edifices in English-speaking areas.

Biya created the reconstruction plan and said he was implementing a resolution approved in October 2019 when he organized a national dialogue to solve the crisis in western regions. Separatists who are seeking to carve out a republic called Ambazonia did not attend and said they will only be ready to discuss terms of their quest for independence.

Separatists have been fighting since 2017 to split the English-speaking Northwest and Southwest from the rest of the country and its French-speaking majority.

The United Nations says the separatist conflict has killed more than 3,300 people, with about 750,000 fleeing their homes to safer French-speaking towns and to neighboring Nigeria.

Previous Story
Tagged:
Copyright © 2022 Voice of America. All rights reserved. Distributed by AllAfrica Global Media (allAfrica.com). To contact the copyright holder directly for corrections — or for permission to republish or make other authorized use of this material, click here.