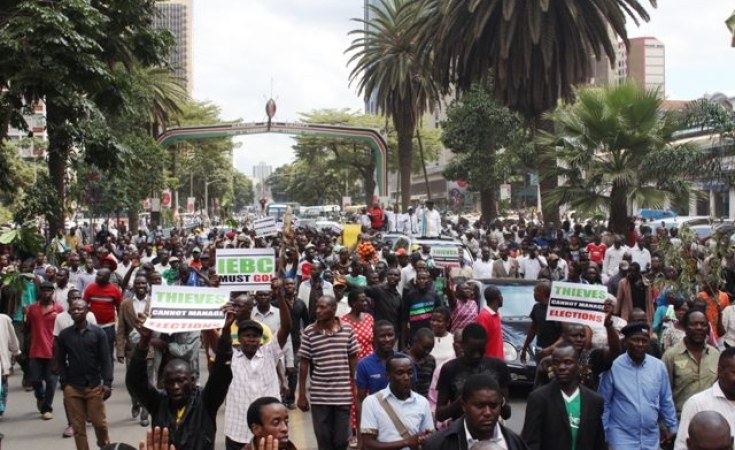 Kenya has four presidential candidates in the August 2022 general election. They recently launched their manifestos and one thing ties them together: the economy.

In no other Kenyan election has the economy been such a key subject, not just for those seeking power, but for voters, too.

There are two reasons: a maturing democracy and recent developments that are affecting Kenyans' pockets.

The candidates have made numerous promises. These include stipends to poor families, access to cheaper credit, land reform, unorthodox exports, farm subsidies and other interventions. But realistically, the country's economic challenges will be difficult to overcome and there's only so much that a government can do about them.

Shift of focus to economy

As a country develops, economic issues take centre stage. Kenya's political leaders are shifting the campaign focus from personalities and ethnicity to economic well-being and growth. Having analysed politics in Kenya through an economic lens for more than 20 years, I have witnessed this shift.

Kenya rallied to register 7.5% economic growth in 2021 - higher than the 4% average recorded in sub-Saharan Africa. The World Bank has projected a moderation of this "remarkable recovery" in 2022. It expects the middle-income economy to grow 5.2%.

The lingering effects of the pandemic and the war in Ukraine have made life difficult for ordinary citizens. This has centred the state of the economy in daily conversations.

The rise in oil prices has led to inflation - where too much money chases too few goods. The World Bank projects that crude oil and natural gas prices will increase by 81% in 2022. And in June, the Kenya National Bureau of Statistics reported that the country's year-on-year inflation rate had hit 7.9%.

This situation has especially affected the poor. For instance, the price of maize flour, a staple in Kenyan households, rose from Sh150 to Sh200 between mid-May and June 2022. Yet, no salary or wage has gone up by 33% over a similar period to protect consumers' purchasing power.

There are others factors driving inflation. Elections in Kenya are expensive, which means there is a lot of money circulating. There are also jitters over the impending change of government, lowering investor confidence and reducing production.

What's more, the rains in Kenya have been unreliable, leading to food shortages and a subsequent rise in prices.

The presidential candidates have noticed that voters are angry about the high costs of living, rising public debt and corruption. They are looking to offer economic solutions through their manifestos.

Former prime minister Raila Odinga is the Azimio One Kenya flagbearer. The coalition has promised a stipend of Sh6,000 (US$50) per month for vulnerable families. The World Bank puts the poverty line at US$57 a month. It's not clear how these vulnerable families will be selected or how long the stipend will be in place for.

Kenya Kwanza - a coalition that's fronting Deputy President William Ruto for the presidency - promises to make Sh50 billion (US$417 million) in credit available to "hustlers", the men and women at the bottom of the economic pyramid. It hasn't said how often this amount will be made available.

In Kenya, 83% of employers are in the informal sector, where "hustlers" work. Access to credit and job growth opportunities in this sector are limited. These "hustlers" make up the majority of the country's 22 million voters, yet many of them live below the poverty line. The World Bank reports that 33.4% of Kenyans are poor.

Land reforms are targeted by both parties. Land ownership is an emotive issue in Kenya and is marked by inequalities that date back to colonialism.

Both manifestos are inward looking, focusing on local challenges and largely ignoring regional or international issues.

Roots Party's George Wajackoyah launched a largely outward-looking manifesto, with China identified as a key source of export earnings. Should he be elected president, Wajackoyah expects to sell the Asian country hyena parts, and dog and snake meat. The party also wants cannabis legalised to allow for the crop's export.

The party additionally says it would deport idle foreigners, hang the corrupt, shut down the Standard Gauge Railway and implement a four-day work week.

Roots Party's economic ideas have brightened the campaign trail and captured the frustrations of ordinary Kenyans. During economic hardships, citizens are drawn to the extremes.

Agano Party has as its flagbearer David Waihiga. Its manifesto is both inward and outward looking. While it calls for the repatriation of Sh20 trillion (US$169 billion) stashed abroad, it also plans to offer tax waivers, subsidise maize and reduce corruption.

All four manifestos promise to create economic opportunities and lessen the suffering of ordinary Kenyans. But they need to be more realistic.

The current budget deficit is 8.1% of the country's gross domestic product - the value of what it produces in a year. A budget deficit increases a country's need to borrow. The World Bank estimates that if public debt gets to 77% of gross domestic product, then more borrowing reduces growth. Kenya will not raise the money it needs to turn the economy around if productivity doesn't rise too.

Three, politicians are constrained by the constitution, international obligations, vested interests and an ever-changing environment. Who foresaw COVID-19 or the war in Ukraine?

Four, the manifestos assume that the government drives the economy. The reality is that it's citizens who do it through taxes. Yet, there is little focus on what individuals can do to uplift themselves.

Five, the manifestos are quiet on deeply entrenched issues that gnaw on the economy, such as tribalism, a culture of seeking handouts and population growth despite limited resources like land. These issues hinder the country's productivity.

The four presidential candidates haven't fully addressed the four factors of production: land, capital, labour and entrepreneurship. Land has been highlighted not as a factor of production, but for political reasons. Capital has been given the least attention - where will it come from beyond debt and taxes? Azimio la Umoja and Kenya Kwanza mention improving labour through education, but fail to detail the plan to make Kenyans more productive and entrepreneurial.

When the voting results are announced, reality will dawn. No jobs will be created overnight. Prices will not drop overnight. Voting is a sprint, economic growth is a marathon.

Waiguru Says Karua Went Against People's Will in Supporting Odinga