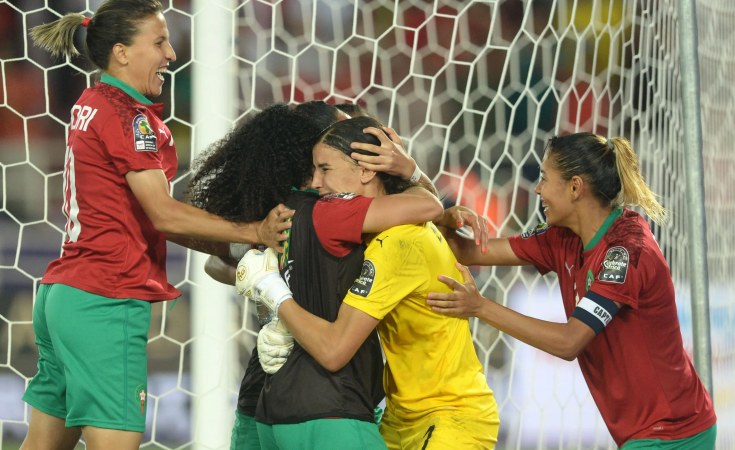 Hosts Morocco stunned ten-woman Nigeria 5-4 on penalties to book their place in the final of the TotalEnergies Women's Africa Cup of Nations for the first time in their history at the Complexe Sportif Prince Moulay-Abdellah on Monday.

The Atlas Lionesses reached the final after beating the Super Falcons in a post-match penalty shootout following a 1-1 draw after extra-time in the enthralling semi-final match in Rabat.

Goalkeeper Khadujah Er-Rmichi emerged the heroine for the home side after saving Nigeria striker Ifeoma Onumonu's kick during the shoot-out.

The save was what separated the two sides after extra-time ended 1-1 as the Lionesses failed to make their numerical advantage count as two Nigerian players were sent off during regulation time.

Morocco had a bright start into the game at the early stages in the first but the Nigerian defense were able to deal with the threats that came along the period.

The hosts were close to breaking the deadlock in the early stages of the second half but for a stupendous clearance by Plumptre Ashleigh Megan denied the Lionesses the lead.

Fews minutes later Halimatu Ayinde was given the marching orders as she was sent off in the 48th minute after a dangerous tackle on a Moroccan player.

Despite being down by a woman, the Super Falcons got the breakthrough of the match in the 62nd minute after Yasmin Katie Mrabet put the ball into her own net following some brilliant effort by Rasheedat Ajibade.

Nigeria were reduced to nine women in the 70th minute when Ajibade was sent off for another cynical challenge that gave the Moroccans the desire to attack.

The Lionesses failed to capitalize on the numerical advantage to steal a win as they fluffed the chances that came their way coupled with some saves by goalkeeper Nnadozie.

Substitute Gift Monday almost fired the Super Falcons into the lead but her effort from the edge of the box struck the woodwork.

Morocco scored all five of their shootouts with Yasmin Katie Mrabet, Ghizlain Chebbak, Zineb Redouani, Nesryne El Chad and Rosella Annie Ayane getting on the scoresheet.

Experienced midfielder Rita Chikwelu scored the first kick for the Super Falcons and was followed by the miss by Onumonu.

Otu Obianang, Plumptre Ashleigh Megan and Gift Monday converted their kicks perfectly but it was not enough as the holders crashed out.

Morocco will face South Africa in the final with both teams looking to clinch the Women's Africa Cup of Nations title for the first time.