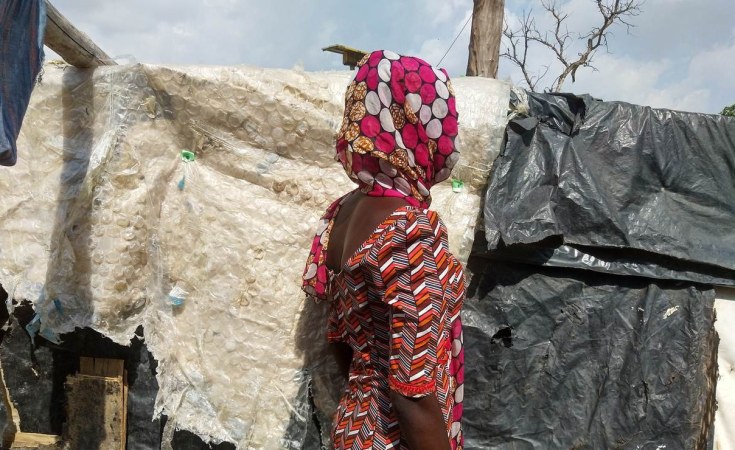 Abuja — As camps for the displaced close in Borno state, thousands of people are at risk of extreme poverty and labour exploitation, aid workers say

When Aisha found out she would be evicted from her camp for displaced people in northeastern Nigeria, the only thing she knew for certain was that she could not go home to the town devastated by Boko Haram militants five years earlier.

The 15-year-old is one of millions of people driven from their homes into camps due to an Islamist insurgency that has killed nearly 350,000 people, with many now facing an uncertain future as local authorities close the makeshift settlements.

"What will I be going back home to meet? Boko Haram militants destroyed our homes, our schools, our farms and our markets. We no longer have our houses to return to," said Aisha, asking to use a pseudonym to protect her identity.

When the militants raided her town, Baga in the northeastern state of Borno, Aisha became separated from her mother, who she has not been in contact with since, and she arrived at the Teachers Village camp in Maiduguri with neighbours.

Despite the hardships of life in Teachers Village, it had become a home of sorts for Aisha and more than 30,000 other internally displaced people (IDP).

So when, in January, the Borno state government shut the camp on the grounds of improved security in conflict hotspots, Aisha was plunged into uncertainty.

At least 100,000 displaced people around Maiduguri face evictions, according to the U.N. Office for the Coordination of Humanitarian Affairs (OCHA), but aid groups say most families are unwilling to return to their ancestral lands, especially in northern parts of Borno, which they deem unsafe.

"The future of IDPs is so uncertain. By allowing them to return to danger zones, authorities are ... cutting them off the support they need to be able to stand on their own," said Salome Gambo from the Caprecon Development And Peace Initiative.

Philip Obaji Jr / Thomson Reuters Foundation
An internally displaced 17-year-old girl, who worked on a tomato farm near the northwestern city of Kaduna, poses for photo at an informal camp in Abuja, Nigeria on July 11, 2022.

"There's no concrete plan in place and I fear things may become worse for IDPs in their home towns than they were while in camps in Maiduguri," said the project supervisor, whose charity supports abuse and trafficking victims in IDP camps.

She said residents were not consulted on the camp closures prior to the announcement, and that local authorities should pause the evictions so residents can prepare for the move to their home towns or elsewhere.

Caught in limbo and cut off suddenly from government and humanitarian aid agency support, former camp residents are at high risk of labour exploitation as well as homelessness and extreme poverty, experts warn.

After leaving Maiduguri, Aisha found work and housing on a millet farm near the northeastern city of Gombe, but the conditions were harsh and she earned as little as 400 Nigerian naira ($0.96) for a 10-hour day without breaks.

"If you're seen resting or even standing without working, they'll take something out of your money or not even pay you at all," said Aisha, who escaped the farm early one morning and fled to an informal camp near the country's capital, Abuja.

Another teenage girl living in one of the squalid and cramped Abuja settlements said she had a similar experience on a tomato farm near the city of Kaduna.

The 17-year-old, who asked not to give her name, said she was confined to a small room without a mattress along with six other girls working at the farm. They were often subjected to beatings and deprived of food, she added.

"Sometimes, they'll lock you up in a room without food or water," she told the Thomson Reuters Foundation.

The Borno state government has offered IDPs up to 100,000 naira in cash when they leave the camps, but many say it is not enough to help them move on with their lives.

Philip Obaji Jr / Thomson Reuters Foundation
S'aidu Mustapha Umar, who was shot and mugged by armed men inside his tent in the New Kuchiguro IDP camp, poses for photo in Abuja, Nigeria, on July 8, 2022.

There were more than 59 million internally displaced people globally last year, with those in sub-Saharan Africa making up nearly 80% of all displacements caused by conflict, according to the Internal Displacement Monitoring Centre (IDMC).

About 3.2 million of those displaced by violence were in Nigeria.

Despite a U.N. warning in June that Boko Haram insurgents remain a threat, Borno state authorities say the Maiduguri camps are no longer necessary due to security improvements, and have become a hotbed for drug trafficking and prostitution.

"So many of these IDPs have farmlands in their communities and if they go back home they'll be able to cultivate those lands and eventually live normal lives," said Mohammed Ibrahim, an official at Borno's Ministry of Reconstruction, Rehabilitation and Resettlement (MRRR).

"If they remain in camps in Maiduguri, they'll keep being idle and continue to depend on humanitarian assistance which isn't helping them move forward," he said, adding that no one would be forced to return to their homes.

Aid for displaced people is all the more urgent as soaring food prices linked to the Ukraine war and climate change impacts raise the risk of mass hunger in northeastern Nigeria, the U.N. humanitarian office OCHA warned last month.

At another camp for displaced people in Abuja, S'aidu Mustapha Umar - who moved to Teachers Village after fleeing the northern Borno town of Konduga five years ago - said he feared he might soon have to move again.

The new Kuchiguro camp where he lives is located on private land, whose owners could decide to evict the occupants at any time, he said.

"We don't even know where we'll go if those who own the land that this camp is built on decide to chase us away," said Umar, who was recently shot by robbers who stole the contents of the small shop he had started running from his tent.

"This would not have happened if the (Borno state) government didn't leave us in a very helpless situation."