Congo-Kinshasa: How Conflicts Intertwined Over Time and Destabilised the DRC - and the Region 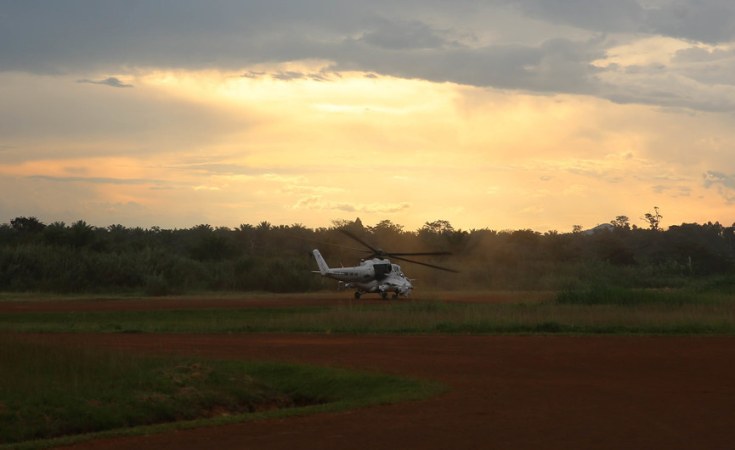 Abel Kavanagh/MONUSCO
A helicopter takes off from a MONUSCO base in Beni, North Kivu, for a reconnaissance mission (file photo).
The Conversation Africa (Johannesburg)
analysis By Jacob Cloete

The conflict in the eastern Democratic Republic of Congo (DRC) is one of the deadliest the world has ever witnessed. One report estimates the death toll at 5.4 million while a more conservative count puts it at one million dead. Much of the conflict is centred in North Kivu and South Kivu provinces, which lie on the DRC's eastern border. The provinces border on Uganda in the north-east, Rwanda and Burundi to the east and Tanzania towards the south-east.

Different scholars have attributed the recurrent conflict to ethnicity and nationality. In recent years much of the focus has been on the illegal exploitation of Congolese natural resources. However, this does not explain the prevalence of the other two drivers of the conflict.

For this reason, I set out to rethink the ongoing conflict in North Kivu and South Kivu as part of my PhD research. I sought to establish whether the conflict can be considered as a political struggle between indigenous Congolese and Kinyarwanda-speaking Congolese. I also sought to investigate the contest for survival between Hutu and Tutsi elites.

Most scholarly works identify a conflict in North Kivu that dominated headlines in 1993 as the starting point of violence in the region. But based on my research, I have concluded that the conflict is two distinct conflicts that became intertwined over one-and-a-half centuries. The first is a much older conflict which started during colonialism and has as its source a local struggle for belonging.

The second is relatively new, and is a regional contest for survival between the Hutu and Tutsi elites.

The first conflict is rooted in Belgian and German colonialism in present-day DRC, Rwanda and Burundi. Based on a racist notion popular among African colonists at the time, the two colonial administrations gave privileged status to some of the local population based on ethnicity. This explains how the Tutsi became the intermediate rulers for German and Belgian colonial powers in Ruanda-Urundi, the colony that gave birth at independence to Rwanda and Burundi.

In addition, when Belgium became the sole colonial power following Germany's exit in 1917, Tutsi overlords were brought into North Kivu as rulers over the Hutu-dominated Banyarwanda. The aim was to recreate the system in Ruanda-Urundi where the Hutu were deployed on menial jobs and hard labour under the watch of Tutsi overlords holding a brief for Belgian colonisers.

Since the 20th century Banyarwanda (or "those from Rwanda") was the common identity for Kinyarwanda-speaking Congolese in eastern DRC. As the latest arrivals from Ruanda-Urundi, the Tutsi transplanted in the 1930s were also considered Banyarwanda by the indigenous Congolese - primarily the Hunde, Nyanga and Nande.

It became clear after the second world war that colonial powers would not be able to hang on to their colonies. The African elites who instigated the independence struggles needed the support of the rural masses. This is the point at which the postcolonial contest over who had a right to belong began to shape the politics in the Great Lakes region.

Ethnic groups which claimed to have belonged to the region first - or the autochthones - branded others as foreigners even though they had lived in the region before Belgian and German colonialism. These so-called foreigners had to leave and return to where they came from.

Struggle between Hutu and Tutsi elites

The second conflict is postcolonial. As Belgium left the scene, Ruanda-Urundi was split into Rwanda and Burundi. In Burundi, the Tutsi maintained their control over the postcolonial state. However, in Rwanda, the Hutu gained control after a period of ethnic conflict between the majority Hutu and the Tutsi. The so-called Social Revolution lasted between 1959 and 1962.

Many Tutsi in Rwanda were subjected to violence, fleeing to neighbouring countries such as Uganda, Burundi and DRC to escape death. This sparked the start of an inter-regional conflict of survival between Hutu and Tutsi elites. Subsequent events of political violence (from 1972 to the present) resulted in wave after wave of refugee migration between Rwanda, Burundi and the DRC.

The result is that ethnicity, nationality, allegiance, place of origin and current place of residence are not neatly separated; the question of who "belongs" where cannot be solved. But people continually try to do so through violence.

The subsequent events of political violence in Rwanda and Burundi resulted in a contest for survival between Hutu and Tutsi elites. Power changed between these two ethnic groups in Rwanda and Burundi. Up to the 1994 Rwandan Genocide, the Hutu were in control of the Rwandan state and the Tutsi of the Burundian state.

However, after 1994 the Tutsi took control of the Rwandan state and the Hutu of the Burundian state.

'Foreigner' is a complex word

The consequences of years of conflict are twofold.

Therefore, in the Kivus, the Banyarwanda and Barundi identities evoke a politics of belonging.

Both these identities make them indigenous to Congo and evoke a counterclaim of belonging to the DRC.

At the second level is the notion that the Tutsi are not from the Great Lakes region. But this is not true.

The first level is restricted to the DRC, and the second level is regional. However, this complex regional politics of belonging is playing itself out in the eastern DRC, and it was here that it became intertwined after some time.

Will there be an end to the violence? It is possible if the geographical scope of the conflict is broadened to include all neighbouring countries and if the focus is a negotiated settlement followed by a period of reconciliation.

Previous Story
The UN Is Under Attack in Eastern Congo. but DRC Elites Are Also to Blame for the Violence
Next Story
Death Toll From Deadly Anti-UN Protests Rises

The UN Is Under Attack in Eastern Congo. but DRC Elites Are Also to Blame for the Violence