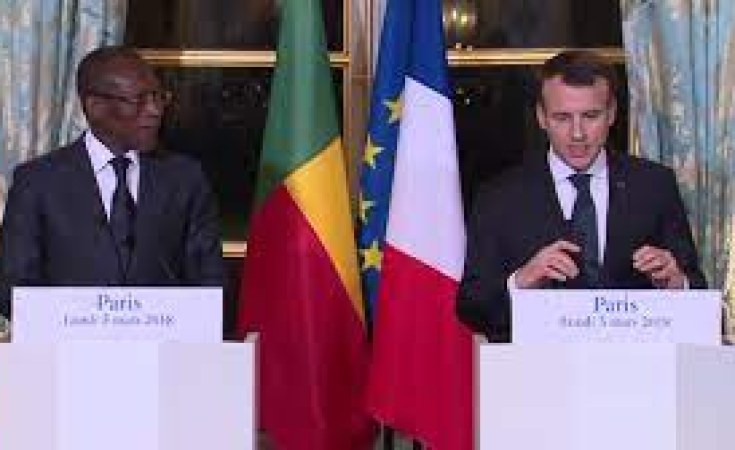 This week's visit to Benin by French President Emmanuel Macron was marked by the release of 30 opposition figures, imprisoned during the April 2021 election campaign. Macron's host, President Patrice Talon, comfortably won that election, from which the vast majority of opposition candidates were barred.

The 30 men were freed during the visit by French President Emmanuel Macron.

Benin was long praised for its vibrant multi-party democracy, but critics say freedoms have been eroded under Talon, a 64-year-old cotton magnate, first elected in 2016.

The special court for economic and terrorist crimes, known as Criet, freed 30 people who were arrested during the election, placing them under temporary judicial supervision.

Among those freed were leaders and youth activists of the opposition Democrats party, the party itself has confirmed.

'There are no political detainees in Benin'

The announcement came hours after Talon dismissed suggestions that his government was holding political prisoners after the jailing last year of two top opposition leaders.

"In Benin, there are no political detainees, no one is detained in Benin for their political opinion," Talon said, answering questions from journalists with Macron at his side.

"But people are detained for having acted, for having committed offenses and crimes in the political field, that is true," Talon continued.

Macron did not mention the political situation in Benin during his speech.

Talon said it was possible that an amnesty or pardon may be given to detained opposition figures.

"We have to be able to adjust the political situation so that it gives a good image, favourable to economic development," Talon said.

"Our image is a little tarnished by the political situation that Benin has experienced lately. I am not ashamed of that."

Benin opposition leader Reckya Madougou was sentenced in December to 20 years in prison for terrorism by a special court in the capital Porto-Novo after a brief trial that her attorneys condemned as a "political attack".

Madougou was one of several Benin opposition leaders banned from running in last year's election in April in which Talon won a second term with 86 percent of the vote.

A former justice minister, she was arrested in Cotonou in March -- just weeks before the election. She was accused of financing an operation to assassinate political figures to prevent the vote and of trying to "destabilise" the country.

Another opposition leader, Joel Aivo, a professor who had been held for eight months, was also found guilty last year of plotting against the state and of money laundering.

Aivo was also barred from running in the election.

Both were tried by the special court dealing with terrorism and economic crimes. Critics say the court, created by Talon's government in 2016, has been used to crack down on political opponents.