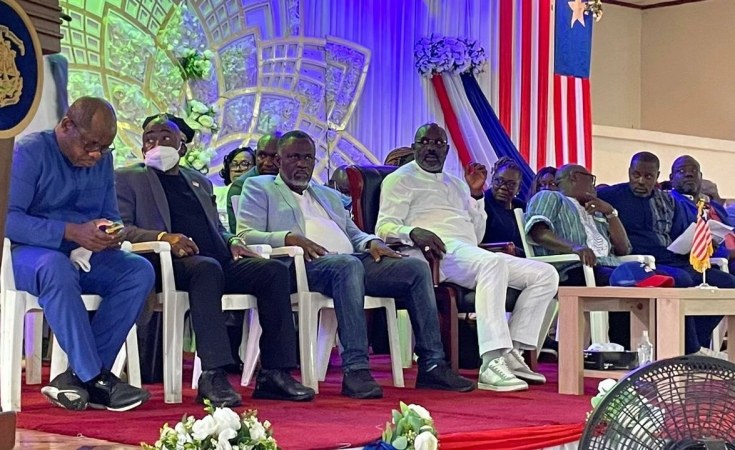 Authorities here appeared to be tightlipped on the U.S Treasury's Office of Foreign Assets Control (OFAC's) designation of three top officials of the Weah administration for involvement in ongoing public corruption, thus sanctioning them from entering the United States.

Attempts by The New Dawn to solicit comments from the affected officials immediately after the United States Ambassador to Liberia, Michael McCarthy, announced the sanction in a press conference on Monday, August 15, 2022, in Monrovia proved unsuccessful, as calls were neither answered nor returned.

The news broke here as President George Manneh Weah embarked on a tour of Montserrado County that hosts the seat of government on Monday, accompanied by his officials in the last leg of a nationwide tour that began last year, ahead of presidential and legislative elections in 2023.

However, sources close to the Presidency confided in this paper that the Government of Liberia is expected to respond officially, to the sanction that has also slammed two senators and a former passport director.

He says following rigorous inter-agency investigation, the U.S. Treasury Department determined that these three officials engaged in corrupt acts, and they are now subject to U.S. financial sanctions and visa restrictions.

"This is a decision that the United States Government does not take lightly because corruption is not a light topic. As Treasury Secretary Yellen put it, "Corrupt acts take resources from citizens, undermine public trust, and threaten the progress of those who fight for democracy", Ambassador McCarthy emphasizes.

He says when a newborn child fails to achieve standard growth benchmarks, doctors term that a "failure to thrive", noting that in the United States, both the Legislative and the Executive agree 100 percent on Liberia in calling for action on the primary cause of Liberia's "failure to thrive", which the ambassador describes as a long-term infestation of rampant and pervasive corruption.

The U.S. says corruption steals from the poorest, it blunts or negates impact of development projects, defeats initiatives before they are even launched, and it raises risk and uncertainty to drive away foreign investment.

Additionally, The U.S. says the Chief of Staff to President Weah, has used government funds allocated to other Liberian government institutions to run his own projects, made off-the-books payments in cash to senior government leaders, and organized warlords to threaten political rivals.

According to the U.S. Treasury's Office of Foreign Assets Control, Solicitor General Cephus has developed close relationships with suspects of criminal investigations and received bribes from individuals in exchange for having their cases dropped.

It cites that particularly, Cephus has worked behind the scenes to establish arrangements with subjects of money laundering investigations to cease investigations in order to personally benefit financially, adding, "He shields money launderers and helps clear them through the court system and has intimidated other prosecutors in an attempt to quash investigations as well as utilized his position to hinder investigations and block prosecution of corruption cases involving members of the government, among others.

It says Twehway secretly formed a private company to which, through his position at the NPA, he later unilaterally awarded a contract for loading and unloading cargo at the Port of Buchanan, in Grand Bassa county.

"The contract was awarded to the company less than a month after its founding. Twehway and others used family members to obfuscate their own involvement in the company while still benefitting financially from the company", the U.S. adds.

Meanwhile, the U.S. Government explains that as a result of Monday's action, all property and interests in property of the three officials that are in the United States or in the possession or control of U.S. persons must be blocked and reported to the OFAC.

Besides, it maintains that any entities that are owned, directly or indirectly, 50 percent or more by one or more blocked persons are also blocked and that OFAC's regulations generally prohibit all dealings by U.S. persons or within the United States (including transactions transiting the United States) that involve any property or interests in property of blocked or designated persons.

It further warns that persons that engage in certain transactions with the individuals and entities designated may themselves be exposed to sanctions or subject to an enforcement action and that unless an exception applies, any foreign financial institution that knowingly facilitates a significant transaction for any of the individuals or entities designated similarly risk to U.S. sanctions.

Next Story
Tagged:
Copyright © 2022 The New Dawn. All rights reserved. Distributed by AllAfrica Global Media (allAfrica.com). To contact the copyright holder directly for corrections — or for permission to republish or make other authorized use of this material, click here.