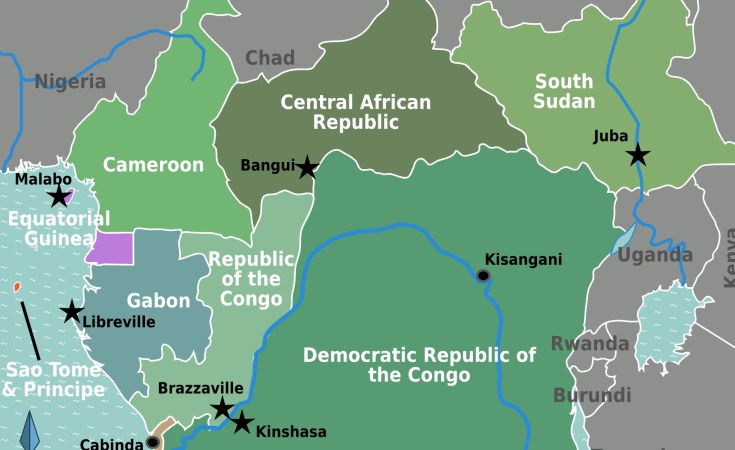 Yaounde — Officials from Cameroon and Congo-Brazzaville have agreed to demarcate their 100-year-old border to reduce border communities' disputes over forestry and wildlife. The deal follows similar agreements with Gabon in May and the Central African Republic in June. Conservationists say having better defined borders will help crack down on wildlife poaching that has plagued the Congo basin.

Congo-Brazzaville and Cameroon say they want to make their common border an instrument of peace and shared development, and stop potential border communities' rivalry over natural resources.

Jacques Essissongo, Congo-Brazzaville's director general of territorial administration, says experts from Cameroon and Congo who are meeting in Yaounde, are members of the technical sub-commission in charge of border demarcation. He says the experts must lay the groundwork for an effective and efficient demarcation of the over 460 kilometer Cameroon Congo border.

Essissongo said according to the document signed in Berlin, Congo and Cameroon share a 140-kilometer land border and over 320 kilometers of maritime and fluvial boundary.

Nji says from Yaounde, experts will move to the border to make sure that demarcation begins within the shortest possible time.

"The experts will go to the field to mark the pillars and to give a comprehensive report on all the border issues between the Republic of Cameroon and the Republic of Congo. We have been working closely under the leadership of the two heads of state. They have given us all the support for us to do our job, they have given us all the facilities and we are very comfortable in exercising this mandate which has been given to us."

Nji said their mandate includes planting boundary pillars destroyed by erosion and floods. He said some of the markers were either destroyed by rival communities, or crumbled with age. He said Congo and Cameroon have agreed to retrace their border in a way that will satisfy both states.

The two countries said they will use the border map drawn by former German and French colonial powers in 1908 as a guiding document.

Congo, Cameroon, Central African Republic, Equatorial Guinea, D.R Congo and Gabon belong to the Congo Basin which the U.N. says is the second largest rainforest in the world.

The U.N. says the Congo basin teems with unique animal and plant species whose protection is vital in preventing global warming.

Ofir Drori is director of Eco Activists for Governance and Law Enforcement or EAGLE NETWORK, an international conservationist group that fights wildlife crimes. He says the Congo basin is one of the world's highest poaching areas and border communities fight for resources.

Drori says wildlife knows no boundary, but if borders are demarcated, conservationists will be able to know where there are more wildlife crimes to finetune their anti-poaching activities.

"The poaching situation in north Congo is quite severe and we have many arrest operations in the area. Some of it is moving towards southeast Cameroon. We try to tackle especially the poaching of pangolins and illegal trade in pangolin scales moving from the Central African Republic to Cameroon in industrial scale [quantities]. EAGLE is taking care of these aspects in arrest operations with the governments in Cameroon and in Congo."

Cameroon, Gabon, Equatorial Guinea and Central African Republic have already launched the demarcation of their borders established by German and French colonial powers in the late 19th century. The boundaries have not changed since the states gained independence in 1960, but there are frequent clashes among border communities.