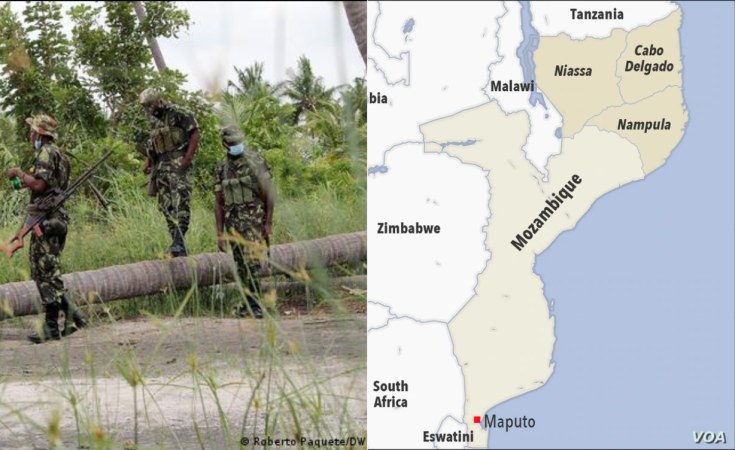 Insurgents attacked in two districts of Nampula province, Erati and Memba, in the past two weeks, in the biggest move south from Cabo Delgado. They moved from Ancuabe thorough Chuire districts in Cabo Delgado, south to Erati and Memba in Nampula. They killed at least 17 people, including an Italian teaching nun who had lived in Mozambique for 59 years.

In June insurgents moved south into the previously safe Ancuabe district, then for the first time south of the N1 road (to Pemba) and into Chiure district, and finally over the Lúrio River into Memba district of Nampula, carefully following a route likely to provide support (see https://bit.ly/Moz-602 and https://bit.ly/Moz-599). Fighting continued only in Ancuabe, but a bigger group of 20 insurgents this month (September) followed the same route attacking Memba (the district in the north east of Nampula on the Lúrio River and the coast) and Erati (inland from Memba and south of the Lúrio).

The march south
Ancuabe district
28-29 Aug: Insurgents attacked Nacuale and Mbonge villages, 10 km west of Ancuabe town in Ancuabe district, killing at least four people in their fields. This forced the cancellation of celebrations on 31 August in Ancuabe town to mark the 51st anniversary of its elevation to a "villa".

29-30 Aug:Insurgents then moved south, crossed the N1 main road and attacked Metor and Megaruma villages on the Megaruma river. Eleven bodies were found.

Chiure district
29 Aug - 1 Sept:
Micolene and Muamula, villages about 10km from Chiure towns, were attacked. In Micolene, the insurgents beheaded a man who sold nipa, a local alcoholic spirit. In Muamula they burned houses and cars.

Erati district
2 Sept: Insurgents crossed the Lúrio River to Nampula province and attacked Kutua village, on the southern bank of Lúrio river in Erati district. They burned a dozen houses and government buildings, including the local health post and a school. Government quickly acknowledged the attack. By 6 September 38,000 people had fled their homes in Erati; some were already displaced and had previously fled south from Cabo Delgado. But some people who had fled Kutua had quickly returned, said district administrator Manuel Manussa.

6-7 Sept: Insurgents attacked the Comboni mission in Chipene. (details below). Defence forces (FDS) flew in by helicopter and set up a base 8 km from Memba town. The Secretary of State for Nampula, Mety Gondola, challenged the Mozambican Defence and Security Forces (FDS) to step up their vigilance and talk more to local people to track insurgent movements.

11 Sept: Many civil servants fled Memba and have not returned, fearing for the safety of themselves and their families, so some state institutions remain closed.

President Nyusi, speaking in Xai-Xai of 7 September, said that "six citizens were beheaded, 3 kidnapped, six terrorists were captured and dozens of houses torched in the districts of Erati and Memba." Insurgents are known to have been recruiting in Memba and other zones of coastal Nampula, and the president said that a recruiter had been arrested in coastal Mogincual district with 16 young recruits. He added that Mozambican forces recently recaptured an insurgent base in Ancuabe.

The movement of the insurgents was being tracked by local people and thousands of people fled as they advanced. On Tuesday 6 September, 78 of the students at the Comboni mission school in Chipene, Memba, were sent home for fear of attack.

At 21.00 on Tuesday sister Maria de Coppi saw the insurgents and yelled out to warn others. She was shot in the head and killed - "to shut her up" said Savana (9 Sept). Two other nuns, two priests, and 12 remaining students fled to safety. No one else was killed or injured, but much of the mission was burned.

Sister Maria de Coppi had been in Mozambique for 59 years, since before independence, and was a respected teacher. She was 83 years old and born in Italy.

Comment: Islamic State (IS) social media reports on the war in Mozambique are often accurate and with photos, which suggests some insurgent bands now have someone with a smartphone and training to report quickly. Insurgents also seem to have stopped destroying mobile telephone towers, indicating they are using local networks. There has also been a shift in social media to a stress on attacks on Christians - not always true, but the Comboni mission attack was publicised. Local al Shabaab insurgents have previously stressed their differences with official Islamic groups and not mentioned Christians. Catholic churches were attacked earlier in the war but not recently. Is IS pushing the local insurgents to attack Christians?  jh

Next Story
Tagged:
Copyright © 2022 Mozambique News Reports And Clippings. All rights reserved. Distributed by AllAfrica Global Media (allAfrica.com). To contact the copyright holder directly for corrections — or for permission to republish or make other authorized use of this material, click here.