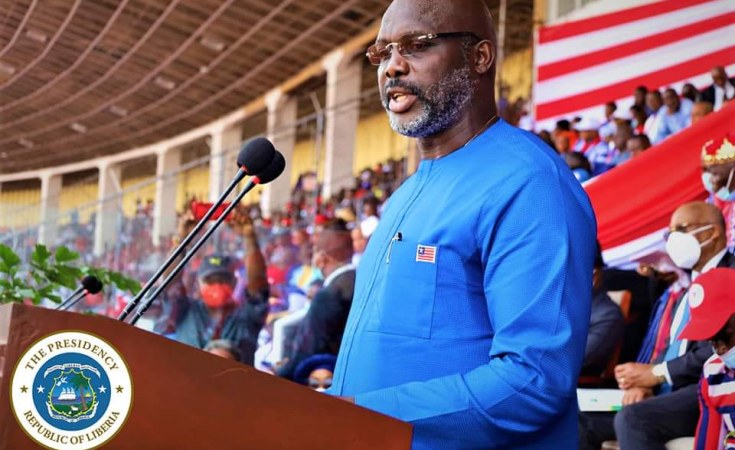 Government of Liberia
President George Weah speaking during the Official Launch of the Bicentennial Commemoration of the Founding of the Republic of Liberia.
The New Republic Liberia (Monrovia)

President George M. Weah has portrayed that the challenges confronting the world today will require immediate collective global actions with the United Nations at the center of the search for solutions.

Addressing the 77th United Nations General Assembly (UNGA) on the theme: "A Watershed Moment: Transformative Solutions To Interlocking Challenges", Dr. Weah maintains that by Working together with the United Nations family, Liberia hereby commits to protect our planet, to promote peace, prevent conflicts, to ensure sustainable financing, and to boost partnerships.

According to him, this commitment is reflected in the Pro-Poor Agenda for Prosperity and Development which embodies the expression of our shared determination to achieve peace, prosperity, and national development; address extreme poverty, inequalities, regional disparities, infrastructure deficits, climate change, and equitable distribution of our national wealth.

Given Liberia's youthful population of more than sixty (60%) percent, the Liberian Chief Executive pointed out, "my Government initiated a youth rehabilitation and empowerment program - the Socio-Economic Empowerment of Disadvantaged Youth Project between 2019 and 2021, with the subsequent launch of a 13-million United States Dollars National Fund Drive for the rehabilitation and empowerment of at-risk youth in Liberia. We remain of the firm conviction that, when empowered, our youth can be a positive force for good".

As Liberia's Feminist-in-Chief, Dr. Weah explains, women empowerment and the promotion of gender equality remain key priorities of my Government. Women do not only comprise almost half of our country's population, but they also play important roles at all levels of our society and must be given equally deserved attention, support, and a place at the leadership and governance tables in our society.

To this end, we have developed the legal framework; including the ratification of regional and international instruments to address gender inequalities which are being carried out as a result of socio-cultural perceptions, practices, and stereotypes that support male dominance and the subordination of women, President Weah indicated.

"I would like to inform you that my Government, together with UN partners, is implementing the EU Spotlight Initiative to end violence and harmful traditional practices against women and girls and promote their sexual and reproductive health and rights", Pres. We stated.

He said the Government of Liberia is currently implementing a 50-Million United States Dollars ECOWAS-funded project to enhance the capacity of female entrepreneurs.

I wish to express Liberia's sincere gratitude to our local and international partners, both multilateral and bilateral, for their continued support of our national efforts in combating the pandemic, he said.

As a result of that support, Liberia is well on its way to achieving herd immunity hopefully by the end of this year with sixty-seven (67%) percent of the population already fully vaccinated, he intoned.

He said that his Government continues to take action through the formulation of new policy frameworks and strategic interventions to address the impacts of climate change and protect the environment. Liberia commits to achieving a target of sixty-four (64%) percent reduction in carbon emissions below business-as-usual by 2030.

We anticipate that the United Nations Climate Change Conference in Egypt (COP 27), will provide the opportunity to accelerate action towards the goals of the Paris Agreement and the UN Framework Convention on Climate Change.

Touching on adhering to constitutional obligation, President Weah said Liberia can proudly confirm that his leadership is expected to hold Presidential and Legislative elections in October 2023. The forthcoming elections will be crucial to consolidating our democracy.

On the international front, President Weah indicated that this year's Assembly is taking place at a difficult time when even as the world is recovering from the scourge of COVID-19, we continue to face the challenges of the war in Ukraine, climate change, and its devastating effects on our environment.

According to him, just as the Ukrainian people are enduring the harsh impact of this unwarranted military incursion, the rest of the world is feeling the harsh consequences of the economic downturn caused by disruptions in global supply chains, food insecurity, and rising prices of basic goods and services.

Dr. Weah also extended thanks to the United Nations and our bilateral and multilateral partners for the support we continue to receive in facilitating our contribution to global and regional peace and security

Tagged:
Copyright © 2022 The New Republic Liberia. All rights reserved. Distributed by AllAfrica Global Media (allAfrica.com). To contact the copyright holder directly for corrections — or for permission to republish or make other authorized use of this material, click here.