Nigeria: Why Hushpuppi Should Spend At Least 11 Years in Jail - U.S. Govt 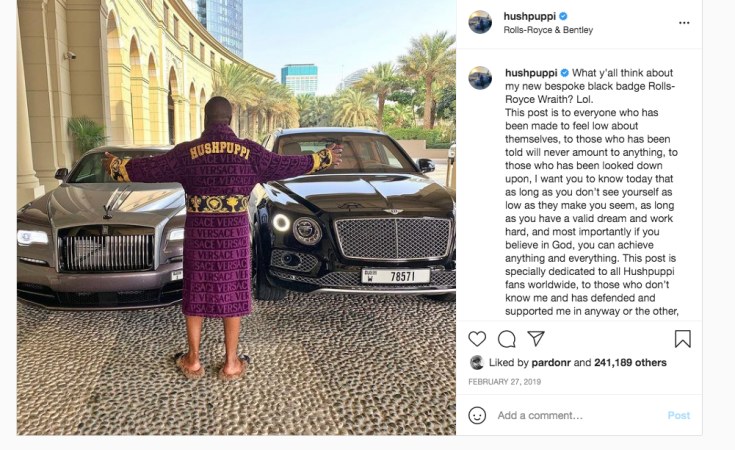 The U.S. government wants Ramon Abbas, aka Hushpuppi, who pleaded guilty to conspiracy to engage in money laundering in July 2021, jailed for 135 months.

The United States government has urged the District Court in Central California to sentence a Nigerian Instagram celebrity, Ramon Abbas, popularly known as Hushpuppi, to 135 months in jail for fraud.

It gave its reasons for proposing the equivalent of 11 years and three months jail time for Mr Abbas in its court filings obtained by PREMIUM TIMES.

Hushpuppi, an international fraudster, was arrested in Dubai, the United Arab Emirate (UAE) in June 2020 over an extensive fraudulent scheme that has robbed victims of their money in the U.S., Qatar, the United Kingdom, and other places.

He was taken to the U.S, where he was charged with fraud and money laundering.

In July 2021, he pleaded guilty to conspiracy to engage in money laundering. He admitted to conspiring with multiple persons within and outside the U.S to launder the proceeds of the fraudulent scheme perpetrated against persons and businesses in different countries.

PREMIUM TIMES reported earlier that the trial judge, Otis Wright, has fixed 7 November as the date to sentence Hushpuppi.

Ahead of the sentencing, a team of U.S. attorneys led by Stephanie Christensen, urged the court to "sentence the defendant (Hushpuppi) to 135 months' imprisonment."

In presentencing filings countering Mr Abbas' plea for a lighter punishment, the US authorities called for "a three year term of supervised release and order of restitution of $1,732,841.34, a fine of $500,000, and the mandatory special assessment of $100."

He will also restitute all stolen funds to the victim, according to the plea agreement signed by the parties.

In the U.S. government's response to Hushpuppi's requests seeking "departures and variances" from the statutory punishment for his crime, the prosecuting lawyers disagreed with Mr Abbas' claims of being a "life-long, hard-working and ambitious individual."

The lawyers argued that Hushpuppi's conduct leading to the charges "is... inconsistent with" his "long history as a scammed and money launderer.

"Defendant is, by all accounts, an ambitious individual, but his ambition has long been directed towards crime and its rewards."

In pleading for leniency, Hushpuppi cited earlier cases of four Nigerians who were convicted of "economic crimes."

But, the U.S. attorneys contend that none of the cited cases is similar to Mr Abbas' charges.

"The sentences in the cited cases are not comparable for the purposes of the court's disparity analysis."

"None of these defendants were high volume money launderers who admitted to conspiring to launder tens of millions of dollars," the government's counter-argument shows.

Hushpuppi's argument seeking a departure from statutory sentencing guideline, due to the disparate treatment of immigrants under the 'First Step Act,' was also opposed by the prosecution.

The government lawyers argued that the four defendants' cases earlier cited by embattled Hushpuppi do not apply as the latter is not an immigrant to the U.S.

The "defendant did not come to the United States of his own volition- he was brought here to face justice in this case," the authorities said.

Similarly, the prosecuting attorneys urged the court to discountenance Hushpuppi's argument that he qualifies for a shorter sentence on grounds of the COVID-19 Pandemic in 2020.

Acknowledging the "profound impact" of the pandemic, the government, however, said Hushpuppi's "experience is not exceptional as compared to that of many others who were in custody during the pandemic and received no extra credit at sentencing," copies of court documents obtained by PREMIUM TIMES show

Mr Abbas, in July 2021, agreed to plead guilty to the multi-million-dollar fraud charges slammed against him by the American government.

He has been in detention since his arrest in Dubai and repatriation to the U.S. in June 2020.

Hushpuppi who initially maintained his innocence, entered into a plea bargain agreement with the U.S. authorities in July 2021, in the hope of getting a lighter punishment.

He pleaded guilty to Count Two which is "Conspiracy to Engage in Money Laundering," an offence that attracts a maximum imprisonment of 20 years among other punishments including full restitution, his plea agreement with the U.S. government states in part.

This paper reported that despite pleading guilty, Mr Abbas will not be freed from paying restitution.

"Defendant understands that the defendant will be required to pay full restitution to the victim(s) of the offence to which the defendant is pleading guilty.

"Defendant agrees that, in return for the USAO's compliance with its obligations under this agreement, the court may order restitution to persons other than the victim(s) of the offenses to which defendant is pleading guilty and in amounts greater than those alleged in the count to which defendant is pleading guilty," the plea agreement seen by PREMIUM TIMES in July 2021 read.

Not being an American citizen, he will be deported after completing his jail term and paying up the amount to be restituted.

The maximum penalty for the offence which Mr Abbas hopes will be reduced at his sentencing include: "20 years' imprisonment; a 3-year period of supervised release; a fine of $500,000 or twice the gross gain or gross loss resulting from the offense, whichever is greatest; and a mandatory special assessment of $100."

In June 2020, the Hushpuppi, who is known for flaunting his ostentatious lifestyle on the Internet, was arrested in Dubai by special agents including the Emerati police officers and Federal Bureau of Investigation (FBI) operatives.

The FBI stated in an affidavit obtained by PREMIUM TIMES that its investigations revealed that Mr Abbas financed this extravagant lifestyle with proceeds of crime.

Previous Story
Why I Deserve Lesser Sentence - Hushpuppi
Next Story
My Regrets, Apologies Over My Fraudulent Schemes - Hushpuppi

Why I Deserve Lesser Sentence - Hushpuppi

My Regrets, Apologies Over My Fraudulent Schemes - Hushpuppi