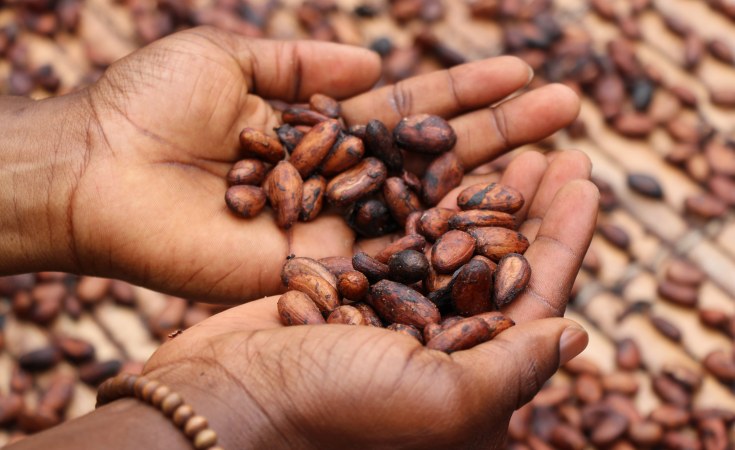 Brussels boycott: Top cocoa producers, Ghana and Ivory Coast, have boycotted a major industry meeting that was to be held in Brussels.

The two top cocoa producers are at loggerheads with multinational chocolate conglomerates decrying what they allege as price curtailing of chocolate's basic raw material, cocoa.

The global chocolate industry is valued at more than $100 billion annually, making it one of the most coveted industries run by large multinational corporations.

The problem is, while the multinational corporations earn a fortune every year, the cocoa farmers squirm in abject poverty.

Recent reports say the two top cocoa producers in the World, Ghana and Ivory Coast, earn less than 6% of the billions of revenues made in annually in the chocolate industry and this is the reason for the Brussels boycott.

As a result of this uneven distribution of income, the World's top producers, Ghana and Ivory Coast, have boycotted the World Cocoa Foundation meeting in Brussels. The Brussels boycott is just as well because the theme of the meeting was 'sustainability' a topic that cannot be honestly discussed if the cocoa producers are been sidelined to start with.

This is a big hit on the big wigs in Brussels because the cocoa producers of Ghana and Ivory Coast produce more than two-thirds of the global cocoa production every year.

These top cocoa producers believe the multinational chocolate corporations are not ready to talk, at least not about fair prices for the cocoa farmers who toil to produce cocoa for their chocolates and spokespersons have said this is why they decided on the Brussels boycott.

It gets worse, the cocoa producers allege actual curtailing of prices and even blocking of measures to improve cocoa prices for farmers.

A spokesperson of Ghana's cocoa regulatory body, the COCOBOD, put it bluntly: "Clearly, someone is ensuring that the farmer continues to stay poor."

In a VOA interview about the Brussels boycott, the spokesperson said "... there is the need for us to find different means of making a point for everyone to know that something is wrong."

It is not clear what sustainability matters were discussed in Brussels in the absence of top cocoa producers. Whatever was convened over fair trade coffee about unfair trade chocolate remains to be seen, or tasted for that matter but without a change in prices, it could not be palatable.

The World Cocoa Foundation represents over 80 per cent of the global chocolate industry's multinational corporations. It is made up of big names like Barry Callebaut and Nestle and other major chocolate companies, including mega players like Cargill and Olam.

So these are the multinational corporations that are enjoying the lion's share of the cocoa seed, and now the chocolate world and the cocoa farmers are all waiting anxiously for their public statement over the cocoa producers' price-curtailing allegations and the Brussels boycott.

On the other side of the world, you have the World top cocoa producers who have their owner union, the Côte d'Ivoire-Ghana Cocoa Initiative (CIGCI).

Here we have an epic standoff of Biblical proportions with CIGCI been David swinging a slingshot and piece of rock at mighty Goliath, the World Cocoa Foundation.

So put the underdogs together and you have a team that; if they join Côte d'Ivoire and Ghana, that would be represents over 75 percent of global cocoa production.

However, things are not so straight forward especially if you throw in the Russia - Ukraine war. Consider this, the war has caused a rise in the cost of exports and imports especially rise in fuel and power costs which has in turn made chocolate production costs rise drastically.

At the same time, demand has taken a dive considerably, this is very bad news for the industry, a paradox that may need bailout money, but when the large multinationals are getting bailout money then the cost of the cocoa seed paid to farmers in Africa must be reconsidered as well.

The World Cocoa Conference (WCC) is considered to be a vital and ground-breaking event that brings together world top cocoa producers into the same room with world top chocolate makers and distributors along with other value chain stakeholders.

The World Cocoa Conference (WCC) was created back in 2012 by the International Cocoa Organization (ICCO) and was launched in Abidjan, Côte d'Ivoire.

According to the WCC organizers, "the event is held every two years to assess the status of the world cocoa economy, review current challenges and agree on measures to address these issues."

This single event brings together the most diverse range of decision-makers and other stakeholders in the cocoa and chocolate value chain, from all over the world.

The WCC, provides a unique opportunity to deliberate the industry challenges and he new opportunities that are arising every year. The WCC is also a platform to collect vital industry information as well as for stakeholders to network.

The first four WCCs were successfully held in Africa, Europe and Latin America. Bali in Indonesia was to hold the next WCC meeting but due to the complications and travel restrictions that came up from the COVID-19 pandemic it had to be foregone.

The International Cocoa Organization had slated the next World Cocoa Conference to be hosted by the Government of Belgium in Brussels in 2024; needless to say, hopefully the price dispute will be resolved lest the world's largest cocoa producers do not attend, again.

As of 2019, the global chocolate market size was valued at US$ 130.56 billion. Despite various uncertainties like the Russia-Ukraine war and fears of another wave of the global pandemic, the industry is expected to grow at a compound annual growth rate (CAGR) of 4.6% between 2020 and 2027.

Given the projected expansion of global chocolate sales, come 2027, five years from now, the chocolate industry is expected to be valued at about $187 billion.