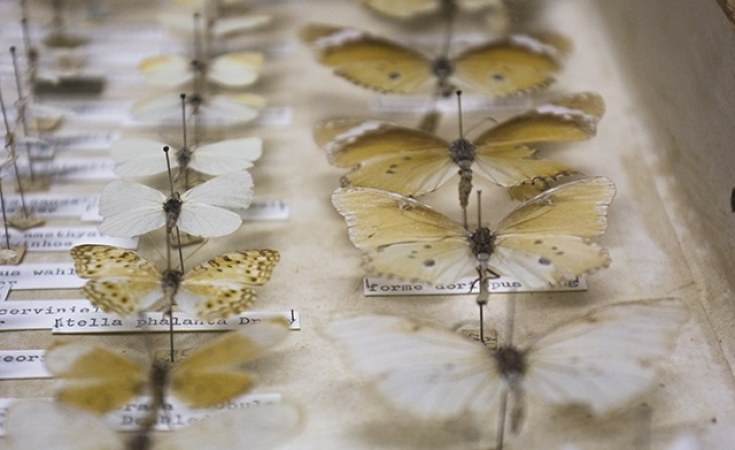 Conservationists on São Tomé, a tropical island that is home to a rich diversity of plants, birds and butterflies, have launched a project to help local farmers breed butterflies to boost incomes and incentivise the protection of the island's forests.

Under a pilot project three farmers on the island, located around 200 kilometres off the coast of West Africa, will produce nearly 10,000 chrysalids per year for sale to collectors in Europe, said Julie Courret, BirdLife International's head of projects in the Democratic Republic of São Tomé and Príncipe.

São Tomé alone is home to at least 116 species of butterfly. Some, like the rare Charaxes montieri, are found nowhere else on earth.

Twenty-two species of butterfly, including seven endemic species, have been selected for possible breeding. Their chrysalids will be exported to overseas collectors, who hold exhibitions of live insects in special enclosures.

Initially France will be the biggest market, said Courret.

The Sao Tomean farmers will release a portion of their captive-bred butterflies back into the wild to ensure the practice is sustainable.

"That's what is going to be important for us. We will produce and release even more than we collect to be sure we don't have a negative impact on the population," said Courret.

The forests of São Tomé and Príncipe are a biodiversity hotspot.

In a striking example of that, scientists this month announced a new species of owl - the Príncipe scops-owl - that lives within a tiny patch of Príncipe's southern evergreen forests.

It's expected that more farmers on Sao Tome - the bigger of the two islands - will diversify to include butterfly farming as an extra source of income.

"I decided to start producing butterflies because it's sustainable financially, and it will have a positive impact on biodiversity and its conservation," said António Alberto Camuenha, a farmer near Santa Roza, in the centre of the island.

The area is characterised by a mix of secondary forest interspersed with agroforestry production.

"More farmers could join and follow our example after seeing the results," he told RFI.

An added benefit is that 90 percent of the coffee and cocoa grown on Sao Tome is organic, said Courret, meaning pesticides aren't used that could harm the butterflies.

Projections done by one of BirdLife's NGO partners have shown that individual farmers could initially earn around 1,800 euros per year, with a potential to earn up to 4,000 euros per year.

That's significantly more than can be earned from ecologically harmful practices like illegal logging and charcoal-burning, Courret explained.

The island nation is the latest African country to promote butterfly farming. In Kenya, butterflies have been farmed since the 1990s in the Arabuko-Sokoke Forest, near the coast.

Internationally, Costa Rica and the Philippines are currently the international leaders in butterfly exports.

The São Tomé butterfly project is part of BirdLife's Forest Landscape Sustainability Accelerator programme, which aims to support conservation partners across the globe to preserve forests while at the same time generating income for local communities.