Africa: While A Historic Deal Was Made, There is Still Much Left To Do #AfricaClimateHope 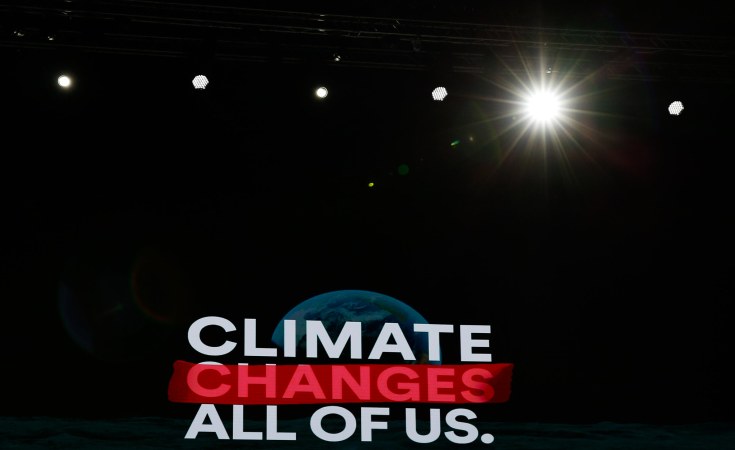 United Nations Climate Change/Flickr
A presentation at the COP27 in Sharm el-Sheikh in Egypt.
allAfrica.com
By Melody Chironda

Cape Town — After two weeks of intense negotiations, a historic deal on loss, and damage was struck, but there is still much left to do. Sadly, nations failed to commit to taking some of the basic steps required to curb the climate emergency's worse impacts, such as the phasing out of all fossil fuels.

The COP27 summit held in the Egyptian town of Sharm el-Sheikh brought together thousands of participants, including government representatives, observers, and civil society to share ideas on how to address the climate crisis.

For the first time, young people had a dedicated Children and Youth pavilion, and with Africa having the world's youngest population, youth activism is an important voice in dealing with the climate crisis. It is hoped the pavilion will pave the way to create a legacy of meaningful representation at future COPs.

Africa has the lowest historical greenhouse gas emissions but remains the most vulnerable continent. After the COP26 disappointment of failing to establish a financial mechanism for wealthier nations to provide finance for loss and damage in developing countries, the COP27 deal is a breakthrough.

"This outcome moves us forward," said Simon Stiell, UN Climate Change Executive Secretary. "We have determined a way forward on a decades-long conversation on funding for loss and damage - deliberating over how we address the impacts on communities whose lives and livelihoods have been ruined by the very worst impacts of climate change."

Climate Action Network international's director Tasneem Essop, a veteran activist from South Africa, said that "COP27 has delivered a historic decision on a loss and damage fund. This decision on African soil is a first step to rectifying the systemic injustice towards billions of people on the frontlines of the climate crisis. The hard work to operationalise the fund and mobilise funding starts now. We will not have patience for delay or obstruction for progress".

"This COP has taken an important step towards justice," said UN Secretary-General António Guterres said in a video message issued from the conference venue in Egypt. "I welcome the decision to establish a loss and damage fund and to operationalise it in the coming period. Clearly, this will not be enough, but it is a much-needed political signal to rebuild broken trust," he underscored, stressing that the UN system will support the effort every step of the way".

However, while many details remain to be negotiated, the fund is expected to see developing countries particularly vulnerable to the adverse effects of the climate crisis supported for losses arising from droughts, floods, rising sea levels, and other disasters that are attributed to climate change. While the negotiated text recognised the need for financial support from a variety of sources, no decisions have been made on who should pay into the fund, where this money will come from, and which countries will benefit. The issue has been one of the most contentious on the negotiating table, reports UNEP.

It is true that COP27 marked a milestone, but critics argue it did not sufficiently address cutting carbon emissions.

Phasing out all fossil fuels

Finances for a just transition - or the move away from fuels  - were also discussed.

Countries have settled on a "phasing down" rather than "phasing out" of fossil fuels. Again, demands by climate change activists to stop funding of fossil fuels have fallen on deaf ears. Activists made it clear they want big polluters out of climate talks and are calling for sustainable ways to increase energy by supporting renewable energy plans.

The outcome of COP27 reminds us that curbing the use of fossil fuels will not be possible through negotiations between governments so corrupted by the fossil fuel sector.

Going into the conference, it was expected that COP27 would respond to the growing urgency for greater emission cuts.

The Emissions Gap Report 2022 painted a bleak picture and warned that the window to control global warming is closing fast. At the current trends, humankind is set to cause an average temperature rise of 2.8 degrees, far above the 1.5-degree threshold spelled out in the Paris Agreement on Climate Change in 2015 and for each fraction of a degree that temperatures rise, storms, droughts, and other extreme weather events become more severe. The report finds that urgent sector and system-wide transformations - in the electricity supply, industry, transport and buildings sectors, and the food and financial systems - would help to avoid climate disaster.

UNEP reports that the final agreement did mention "the urgent need for deep, rapid and sustained reductions in global greenhouse gas emissions" to limit global warming to 1.5°C above pre-industrial levels, the most ambitious goal of the Paris Agreement. Yet there were concerns that no real progress was made on raising ambitions or cutting fossil fuel emissions since COP26. That was considered bad news for a rapidly warming world. The final 10-page summary text, which was agreed upon on 20 November, says that limiting global warming to 1.5 °C above pre-industrial levels requires "rapid, deep and sustained reductions in greenhouse gas emissions" by 2030.

The existing pledge to try to limit global warming to the key threshold of 1.5C above pre-industrial levels was retained - but there is concern it is slipping out of reach, with UN chief António Guterres saying a "giant leap" on climate ambition is still needed and the planet is still "in the emergency room .. we can and must win this battle for our lives."

Most of the conversation on climate actions is focused on mitigation efforts. Developing countries, who are more vulnerable to the impacts of climate change, have often argued that adaptation is not given sufficient attention.

However, COP27 saw significant progress on adaptation, with governments agreeing on the way to move forward on the Global Goal on Adaptation, which will conclude at COP28. New pledges, totaling more than U.S.230 million, were made to the Adaptation Fund at COP27. These pledges will help many more vulnerable communities adapt to climate change through concrete adaptation solutions. COP27 President Sameh Shoukry announced the Sharm el-Sheikh Adaptation Agenda, enhancing resilience for people living in the most climate-vulnerable communities by 2030. UN Climate Change's Standing Committee on Finance was requested to prepare a report on doubling adaptation finance for consideration at COP28 next year.

One of the core principles of climate diplomacy is to help poorer countries move toward cleaner technologies. Africa is already heating up twice as fast as the rest of the world, and each moment takes us ever more dangerously beyond the 1.5C threshold. South Africa faces a complex web of challenges in its energy sector such as being reliant on coal, problems with regular maintenance of infrastructure, and what appears to be extensive sabotage and theft at the state-owned power utility Eskom.

As a way to speed up the transition away from coal, rich and emerging economies entered into just energy transition partnerships. South Africa's government endorsed the Just Energy Transition Partnership (JETP), an investment plan that will enable the country to access up to U.S.$8.5 billion in investment to fund the transition away from coal. It entered into a partnership with France, Germany, the U.S., the UK, and the European Union at COP26 in Glasgow, Scotland, in 2021. The climate-finance agreement aims to invest in renewable energy and move away from coal for South Africa over the next three to five years. Since then, other countries have jumped on board.

In addition, as a result of the hard work of the labour movement, COP27 also created a work programme for a just transition and stressed the importance of social dialogue. Workers' rights must remain at the centre and it must not be transformed into a cover for techno-fixes or false solutions.

The Sharm el-Sheikh Implementation Plan made a breakthrough in support for climate victims but avoided confronting the oil and gas sector. The plan highlighted that a global transformation to a low-carbon economy is expected to require investments of at least  U.S.$4 to U.S.$6 trillion a year. Delivering such funding will require a swift and comprehensive transformation of the financial system and its structures and processes, engaging governments, central banks, commercial banks, institutional investors, and other financial actors.

Africa turns up the heat for COP27 but is rejected again

The  African Group of Negotiators has been representing the common interests of African nations as a bloc since 1995's first COP in Berlin, Germany, ensuring that Africa's voice on climate issues is heard over competing interests. The group has decried the fact that developed nations are not just leaving Africa behind in the Global Goal of Adaptation to Climate Change; they are also flying too far away from their own commitments.

Africa has been trying for years to get its special needs and circumstances officially recognised in UN climate talks, without success.  The African Group of Negotiators (AGN) wants a formal agenda item to cover issues like the continent's vulnerability to extreme weather and high borrowing costs. African nations had hoped that the "African COP" would recognize its special needs and circumstances to tackle climate action. The group has indicated that developed countries are backtracking on their own commitments and are late with their promises to provide U.S.$100 billion by 2020 to reduce emissions and deal with climate impacts. However, a proposal by the African Group of Negotiators was once again rejected.

In the wake of extreme weather and other climate crisis disruptions, women have been shown to be more vulnerable to impacts than men due to a variety of social, economic, and cultural factors, yet their story is all too often just a footnote in the news. The world must factor in the disproportionate losses of women. Too few women are participating in COP27 climate negotiations, charities, activists, and politicians have warned. This is evidenced when world leaders gathered at the COP27 summit and took the inaugural 'family photo'. There were 110 leaders present, but just 7 were women. However, young women are currently leading the charge in taking climate action, according to the UN. Some of the most famous legal cases brought against governments for inaction on climate change have been brought by women.

This story was produced as part of the 2022 Climate Change Media Partnership, a journalism fellowship organised by Internews' Earth Journalism Network and the Stanley Center for Peace and Security

Across Africa, Water Conflict Threatens Security, Health, and the Environment