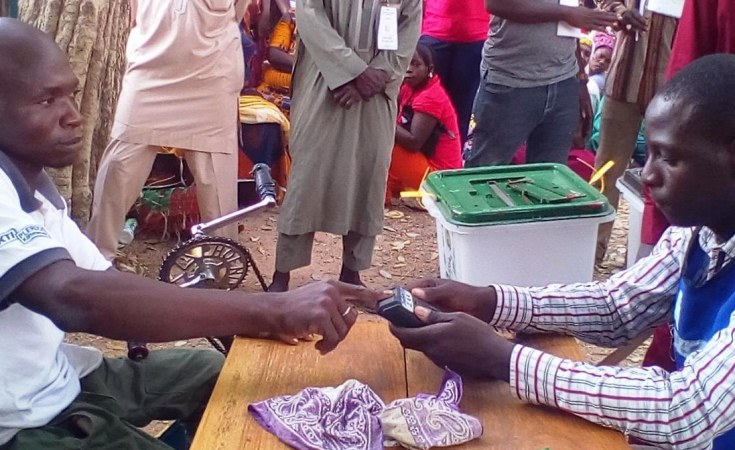 A large number of those displaced are not in IDP camps, which means they may not participate in the elections.

The Chairman of the Independent National Electoral Commission (INEC), Mahmoud Yakubu has said Nigerians living in internally displaced persons camps would vote in the 2023 general elections.

Mr Yakubu, who was speaking about Nigeria's preparedness for the elections Tuesday at Chatham House London, said violence would be a major challenge to credible elections this year.

He said the commission worked with the National Assembly to amend the Electoral to ensure displaced persons in camps can also vote.

Mr Yakubu said the decision was informed by the high number of estimated IDPs noted in 2015 in the North East and North Central.

"In 2015, an estimated 2 million voters were displaced by conflict in the North-East and North-Central part of the country. In response, the Commission worked with the National Assembly to amend the Electoral Act to support voting by Internally Displaced Persons (IDP). This entailed making additional provisions for enumeration of IDP voters and for voting in their camps.

"In response to the IDP problem, the Commission recently revised its Policy on IDP Voting, which it has been using since 2015, to cater for new realities of displaced populations," he said.

The boss of the electoral commission however said in some states, the IDPs are not in identified camps which would be difficult to coordinate.

"Unfortunately, in some States it is difficult to identify the IDPs because they are not in camps but rather settled among extended family members, relations and good Samaritans within safer communities where they are not registered voters. As a result, it is very difficult for the Commission to provide necessary electoral services to such IDPs. However, those in camps within Nigeria will be catered for in line with the Commission's policy," Mr Yakubu said.

Northern Nigeria has been witnessing series of attacks in all the three sub-regions. In the North East, the activities of Boko Haram insurgency and terrorists loyal to ISWAP have led to the death of hundreds of thousands of people but more alarmingly, the displacement of millions of residents with several of them fleeing to Chad, Cameron and Niger Republics to seek refuge.

In the North-central, farmers - herders clashes, banditry and ethno religious violence has led to the displacement of others.

In the North-western states, terrorists, loosely called bandits, have been unleashing mayhem on residents. Schools have been attacked, farmers scared away from going to farms, local traders stopped patronizing local markets with federal, states and local highways endangered.

The act of terrorism has led to the displacement and death of millions of people. PREMIUM TIMES, in a special report discovered a rise in rural - urban migration due to the activities of the. terrorists.

A local journalist in Katsina, who reports politics for ALFIJIR RADIO 91.5, Abdurahman Jani, said the act should have allowed IDPs not in designated camps to vote.

"So, since these people are Nigerians and most of them most have forgotten their PVCs while leaving their villages or didn't have the chance to settle in their new environment and even make effort to register for a new PVC when it was being done, the appropriate thing is to allow those in Nigeria to vote," he said.

Electoral Board Will Hold Elections Despite Attacks On Facilities, Electoral Boss Insists

Electoral Chairman Speaks On Insecurity, Attacks On Facilities Ahead of 2023 Polls