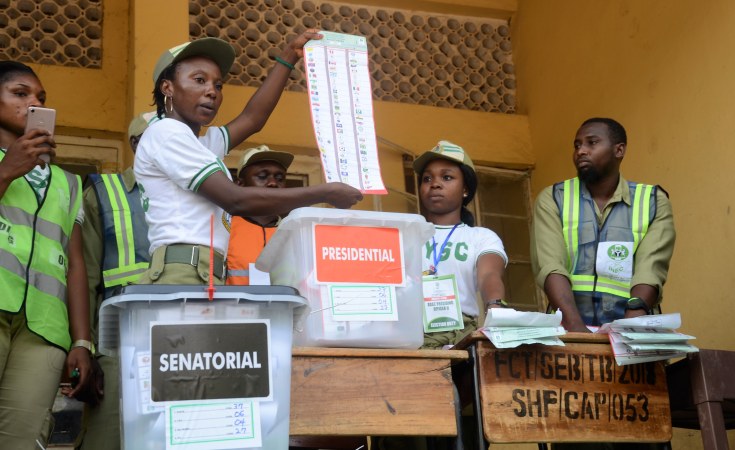 A radical departure from the existing policy is needed to enhance safety, but the candidates' proposed reforms miss the mark.

Eighteen presidential candidates will participate in Nigeria's polls on 25 February. Three stand out - Bola Ahmed Tinubu of the ruling All Progressives Congress (APC), Atiku Abubakar of the People's Democratic Party (PDP) and Peter Obi of the Labour Party.

The new president will be sworn in on 29 May and will be constitutionally mandated to manage Nigeria's security governance architecture between 2023 and 2027. This election - the seventh since the country's return to democracy in 1999 - will significantly impact policy direction.

Public safety and security in Nigeria are in a bad place - due mainly to the many armed groups active in the country. Over the past seven years, the government has invested over N12 trillion ($26.5 billion) in military assets, expanded the armed forces and focused on degrading violent extremist groups in the North East region.

The corruption and abuse of security spending exacerbates Nigeria's security crisis. Funds are provided to federal, state and local government officials to disburse at their discretion. Transparency International estimates that 'secretive, unaccounted-for cash expenditures' add up to over $670 million a year.

The new president must grapple with a broken state dominated by armed groups and socio-economic problems. This calls for a radical departure from old approaches. The drivers of banditry, violent extremism, kidnapping and other crimes must be confronted head-on through economic development plans that stem rising poverty and youth unemployment. The security and defence infrastructure also needs modernising, starting with police reform and better accountability in the military.The current government has been criticised for presiding over Nigeria's worsening security, but the top three candidates' commitments mirror existing strategies. And the manifestoes of all three cover similar policy issues.

Disappointingly, his manifesto is not explicit on some of the most important issues. He fails to commit to the size of an increased police force and is silent on decentralising the policing system to allow sub-national units to own and fund their respective policing outfits.

Mr Tinubu does not take a stance on any of the following: using private security to protect national assets; how much of the national budget should be committed to defence and security; and engaging the armed groups driving Nigeria's crisis.

The security proposal of the PDP's Atiku is scant in detail and lacks action plans against banditry, terrorism and kidnapping - Nigeria's primary national security threats. However, it does make some bold policy commitments.

Atiku promises to increase the size of the police force by more than 70 per cent in line with international standards. He also commits to strategic engagements with state and non-state actors, and to removing policing from the exclusive (federal) to the concurrent (federal and sub-national) list. Overall, his proposal is uninspiring and doesn't present credible policy alternatives.

The manifesto of Peter Obi, the Labour Party's 'progressive alternative' to the two established political parties, blends security, national cohesion and inclusive governance as a theme. This raises questions about his grasp of the severity of Nigeria's security woes.

Mr Obi acknowledges that banditry, terrorism and organised crimes are central to Nigeria's insecurity. His most significant commitment is the extensive reform of the Nigeria Police Force to allow all sub-national units to establish and control their own policing teams. Other proposals are vague and indistinguishable from the current government's policies.

The three candidates agree on the multidimensional threats to Nigeria's statehood and propose various interventions including police reform, better resourcing of security services, upgrading weapons systems, community engagement and economic empowerment. But they all fail in one area. None have costed their security plans or the investment needed to realise their manifesto promises. And this is in the context of Nigeria's declining revenue.

This questions the viability of their plans. A registration drive has added 9.5 million Nigerians to the pool for this election, and voters will be swayed by promises on health, education and economics. But without a security revamp, improving these sectors will be difficult.

Given that the leading candidates' proposals are inadequate on security, the next president must quickly review his campaign promises and prioritise comprehensive reforms that make Nigeria safer.

(This article was first published by ISS Today, a Premium Times syndication partner. We have their permission to republish).