Sibongile Khumalo was born into a musical family on September 24, 1957 in the South African township of Soweto. She completed an honours degree in music history at the University of Witwatersrand, following a bachelor of arts in music from the University of Zululand. In 1993, she won the Standard Bank Young Artist Award at the Grahamstown Arts Festival, an annual South African event that showcases the best talent in the arts in the country. She performed overseas regularly. Her vocal range saw her able to sing traditional, choral, jazz, and opera. In 2009, Khumalo was awarded an Honorary Doctorate by Rhodes University. She was also awarded Honorary Doctorates by the University of South Africa - Doctor of Musicology - as well as the University of Zululand - Doctor of Philosophy. A career highlight was her performance at late president Nelson Mandela's inauguration in 1994. Tributes have poured in at the news of Khumalo's death, with President Cyril Ramaphosa paying tribute to her for advocating for the rights of performing arts, women, as well as human rights. Khumalo, an esteemed Member of the Order of Ikhamanga, a jazz and opera musician, died at the age of 63, from complications following an earlier stroke. 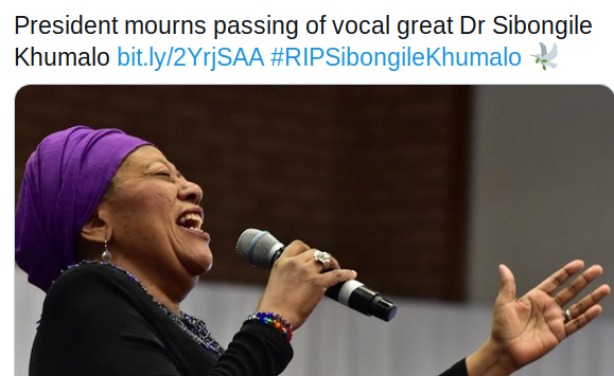 A tweet by the South Africa Presidency announcing the passing of Sibongile Khumalo.