The Inter-Governmental Authority on Development (IGAD) - a trade bloc representing eight African countries - has expressed concern over the potential environmental disaster posed to the Red Sea by the FSO Safer, an ageing vessel moored off Yemen. Experts say the Red Sea ecosystem will severely be affected if the rusting oil tanker, loaded with over a million barrels of crude oil, breaks up or explodes and catches fire. The East African reports that IGAD Executive Secretary Dr Workneh Gebeyehu says an oil slick would exacerbate existing economic and humanitarian crises in Yemen and the region, including IGAD member states on the western shores of the Red Sea. Djibouti, Eritrea and Somalia could be directly affected. Dr Workneh called on the international community to "take urgent steps to stabilise the oil tanker, particularly through undertaking urgent repairs, and thereafter offload the oil it carries".

The United Nations says the Safer is a Floating Storage and Offloading (FSO) oil vessel moored about 8km (4.8 nautical miles) south-west of the Ras Isa peninsula on the west coast of Yemen. It has been permanently anchored at the same location for more than 30 years without any dry-docking or shipyard repairs. The vesseld is legally owned by the national oil company, the Safer Exploration & Production Operation Company. Prior to the escalation of the conflict in Yemen in 2015, the vessel was used to store and export oil from fields around Ma'rib. Houthi rebels are now in control of the massive ship.

A senior UN official told the Security Council in June 2021 that an agreement reached in November 2020 with Houthi forces on the scope of work need to make the vessel secure, had generated hope of a swift resolution. Inger Andersen, Executive Director of the UN Environment Programme, said, however, that due to "political and logistical obstacles", the planned assessment mission had yet to deploy. "As a result, we still do not know the exact condition of the vessel, nor what the best solution would be to deal with 1.1 million barrels of oil in an ageing tanker located in an environmentally sensitive area of the Red Sea." 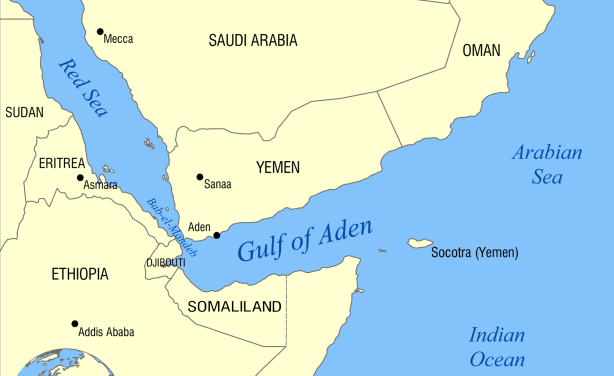 Map showing the location of Yemen, the Red Sea and East African countries.