On September 30, 2021 the Ethiopian government gave seven senior humanitarian officials 72 hours to leave the country, accusing them of meddling in its internal affairs and diverting aid and telecommunications equipment to the Tigray People's Liberation Front (TPLF). The government has been fighting the TPLF in the north of the country for since November 2020.

Ethiopian Ambassador Taye Atske-Selassie in his address to the UN Security Council, levelled accusations against UN staffers, stating that the number of people in need of food aid was inflated by 1 million and that there were reports of deaths that never happened.

In a rare and unusual public exchange, U.N. Secretary-General António Guterres took the floor at the council, telling the Ethiopian government that it should show him any documents or evidence it has to substantiate accusations related to the expulsion.

Guterres emphasised that he seeks cooperation with the government so that humanitarians can do the necessary work to ease the suffering of millions of Ethiopians.

Prime Minister Abiy Ahmed was sworn in for a new five-year term on October 4, 2021 amid the ongoing conflict in the northern Tigray region, where thousands have either fled or been killed.

The UN has repeatedly said that the Tigray region is entering a famine phase, as the Ethipian government continues to block humanitarian aid into the area. 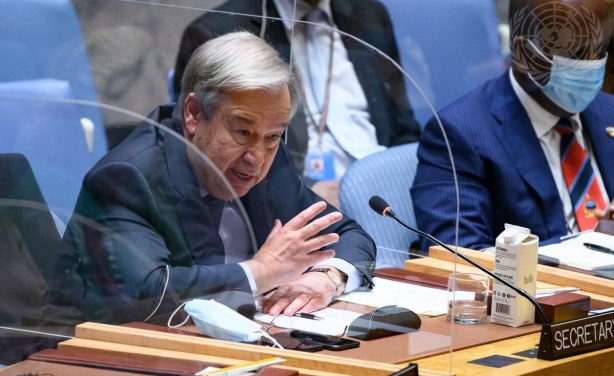 Secretary-General António Guterres addresses the Security Council meeting on peace and security in Africa, which included a discussion on Ethiopia, on October 6, 2021.