Ethiopia is expelling seven high-level United Nations officials, Voice of America reports. The country's foreign ministry said on September 30, 2021 that the officials were informed they must leave the country "within the next 72 hours" for allegedly "meddling" with internal matters, without being specific. The world body said on October 4, 2021 that the official had left the country.

The announcement of their expulsion came two days after a senior UN official reiterated that hundreds of thousands of people in Ethiopia's embattled northern Tigray region were probably experiencing famine. Aid chief Martin Griffiths said on September 28, 2021 that a nearly three-month-long blockade had limited aid shipments to 10% of what is needed in the region.

Among the seven people who have been ordered to leave Ethiopia are the heads of the United Nations Children's Fund and the United Nations Office for the Coordination of Humanitarian Affairs (OCHA). The remaining five are OCHA officials.

UN Secretary-General Antonio Guterres said in a statement that he was "shocked" by the expulsions and that the organization's humanitarian operations were "guided by the core principles of humanity, impartiality, neutrality, and independence."  He said the UN was "now engaging" with the Ethiopian government "in the expectation that the concerned UN staff will be allowed to continue their important work". 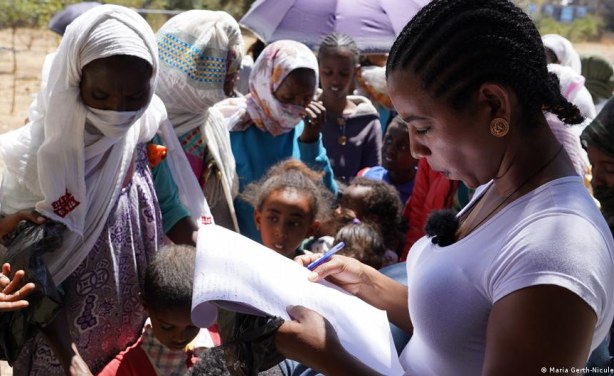 The UN and human rights groups have warned that fighting has hampered food security in Tigray with a real risk of famine (file photo).