President Cyril Ramaphosa has criticised travel bans imposed on parts of Africa by western countries because of the outbreak of Omicron, a variant of Covid-19. Ramaphosa, who was speaking at the Dakar International Forum on Peace and Security, said the travel bans signaled western hypocrisy.

According to News24, the president said that "another disappointment thrown our way, when South African scientists discovered omicron, the new variant, they immediately took on the responsibility of informing the entire world that a new variant has been found. And what was the response? The northern countries decided to punish the excellence from Africa. They basically said we will not allow you to travel. Lo and behold! Omicron is spreading all over the world," he added.

"They have always said to us 'base your decisions on science' but when the moment comes for them to be more scientific they are not. They resort to their own self-interests," Ramaphosa said, calling for travel bans to be lifted immediately.

Omicron was first detected in Botswana, but the new variant is believed to have been spreading in Europe undetected much earlier. Most countries barred entry to travelers from South Africa, Botswana, Zimbabwe, Namibia, Lesotho, Eswatini, Mozambique, and Malawi. Ramaphosa has called on countries that have imposed travel bans on southern African countries to urgently reverse their decisions. "There is no scientific justification for keeping these restrictions in place," the president said. 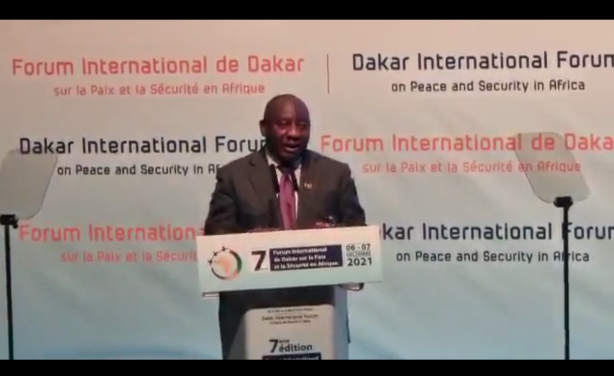 President Cyril Ramaphosa says he is disappointed at wealthy and big countries for “ordering more vaccines than their population required”. He says they “hoarded vaccines”. #SAinSenegal #peaceforum2021