What Cattle Conflicts Say About Identity in South Sudan

In March 2022, violent clashes between farming communities and cattle herders broke out in Eastern Equatoria State. It was the latest incident in months of cattle-related violence in the area, which is in the country's southern region.

The Equatoria region hosts South Sudan's capital, Juba. It is inhabited by more than 30 different ethnic groups, most of them farmers. It was the birthplace of the southern rebellion against Sudan's Khartoum. Economically, it is the strongest region of the country, with immense agricultural potential.

As a result, Equatorian elites have used cross-border cattle-related violence to call for a hardening of internal boundaries. It has also been used to challenge centralised power.

The defence of Equatorian farmers represents a much-needed unifying cause for a grouping divided by internal disagreements on whether to cooperate with the government or not.

The Equatorian political identity draws on existing fault lines of culture and historical memory. If the feeling of marginalisation persists, however, a strong movement could establish a community with separatist aspirations. This could endanger efforts to stabilise the world's youngest nation. 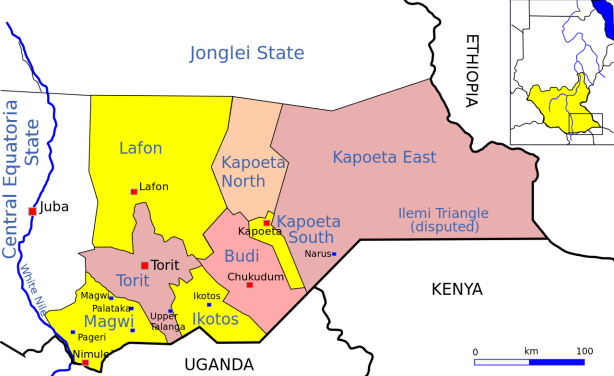 A sketch map of Eastern Equatoria state in South Sudan, showing the border with Kenya and Uganda.